Does anyone have any information or opinions on the federal government’s recent cuts to the Trade Routes and the PromArt programs? Some are saying this is a vicious and sweeping attack on Canada’s culture industries.

What does all this mean? What should we do? 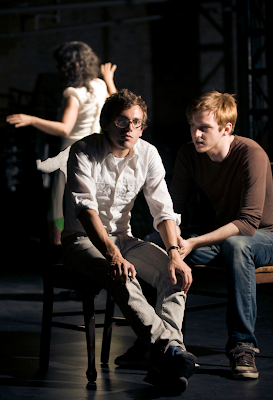 A press still for One Reed Theatre’s (never underestimate) The Power at SummerWorks.

Today’s the last day to catch some SummerWorks action. Does anyone have any recommendations? Funny SummerWorks stories? Top picks?

Why is theatre imporant – survey results 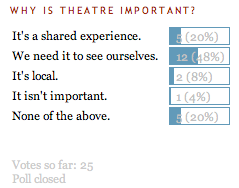 “We need it to see ourselves.” That’s the most popular answer among the 25 respondents to our Why is theatre important survey. The rest of the votes were split between “It’s a shared experience” and “None of the above.”

Given the small sample group, this is hardly conclusive polling. Still, it’s heartening to see a front runner emerge – especially given theatre’s current challenges communicating its value proposition to the non-theatregoing public.

Incidentally, the phrase “We need it to see ourselves” is a direct lift from Daniel MacIvor’s “10 questions” interview, here.

Eyring argues that the current repertory model in the U.S. is in fine working order:

“Many actors – instead of performing in several shows with a single theatre company in the same season – construct year-round employment by performing in different theatres throughout the year.”

“If actors manage to create community and continuity IN SPITE OF the institutions, no credit for that reflects back on theaters that refuse to support artists in a meaningful fashion: with staff positions, with health insurance, with a modicum of respect and dignity earned by working craftsman anywhere. Dribs and drabs of roles given when artists can jump for them are no substitute for real institutional support, and to claim otherwise is absurd.”

Daisey ends with a challenge to the magazine to devote an entire issue to the concerns raised in his hit monologue, How Theatre Failed America, opening its pages to “informed bloggers and theatrical luminaries.”

What do you think? Are theatre’s regional institutions looking out for the artists? Or are they simply working to preserve their own outdated apparatus?