The Occupation of Palestine is an Artistic Issue 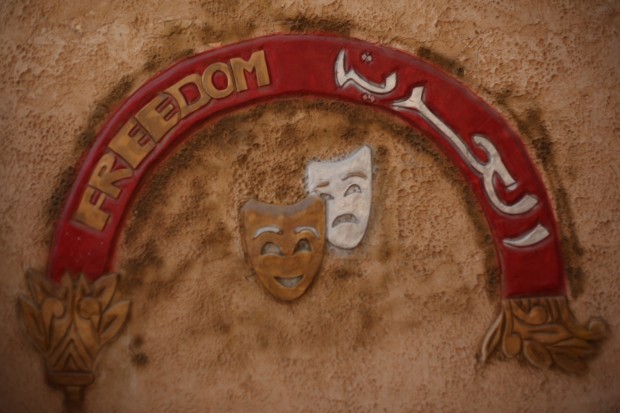 “I want to move people. I want them to wake up … It is their silence that allows things to continue.”

The occupation of Palestine is an artistic issue because storytelling is an artistic craft. As artists we know that one story can be told an infinite number of ways. In storytelling, characters do not always have equal access to narrative platforms: this is particularly apparent in the story of Palestine. The dominant narratives told to the world about Palestine are instrumental in ensuring the occupation continues. Contemporary art-makers and audiences are versed in balancing many practices of artistic reception: the skilled playgoer, for example, can submit to Aristotelian catharsis at the moment of dramatic climax and still invoke Brecht to question the intentions of the artist and other possible perspectives not present on stage. It is vital that the world maintain such critical artistic reflexivity when told stories about Israel-Palestine, for as Joyce Dalsheim argues, “The literary nature of national narratives is extremely important” (156). As is the case in many settler-colonial societies, including Canada, the popular story told about the state of Israel relies on the erasure of Palestinian indigeneity. In the particular case of Israel: “a people without a land” needed a “land without a people,” and so in the story of Israel’s statehood, Palestinians become “an uncanny other, not fully recognized, not fully known, somehow magically imagined away, and for all these reasons that much more frightening” (167).

When they are not made invisible in the story of Israel’s creation, Palestinians are rendered hypervisible in narratives of violence that conceive of Palestine and Israel as somehow being equal players in an equal war, as opposed to a colonized people—refugees in their own land—resisting apartheid and siege from a military superpower. North Americans very often do not feel empowered to speak or think critically about Israel and Palestine because of the dominant narrative that conflates a 3500-year old religious history with a 66-year old colonial history — the story is thus, “too complicated to question” and those who dare tell another version of the story are bound to have their motives, integrity, and legitimacy questioned. The occupation of Palestine is an artistic issue because the prevailing story told about Israel-Palestine is an artful construction that serves to perpetuate the occupation, and it must be understood as such in order for critical analysis and action to take place.

The occupation of Palestine is an artistic issue for artists in the West when the colonial powers who maintain the occupation of Palestine exact influence so powerful and intimidating that it censors our art-making at home. In 2006, CanStage had planned to stage My Name Is Rachel Corrie, a play based on the true story of a young American activist who was killed by an Israel Defense Forces bulldozer while attempting to prevent it from destroying a Palestinian family’s home. However, the theatre pulled the show from its season after being dissuaded by “prominent benefactors” (Voss). New York Theatre Workshop pulled the show from their season the same year, saying they didn’t want to take “a stand in a political conflict” (Borger). When Teesri Duniya Theatre staged it the following year, it was met with charges of anti-Semitism from groups such as the Quebec-Israel Committee, who publicly derided the show—without having seen it (Arnold).

In 2009, Independent Jewish Voices Montreal (IJVM) organized a reading of Caryl Churchill’s Seven Jewish Children: A Play for Gaza, which Churchill wrote in response to Israel’s military assault on Gaza earlier that year. Again, the all-consuming taboo against talking about Palestine in the West surrounded the project: as IJVM’s Abby Lippman wrote in an alt.theatre Dispatch, “cries of outrage and accusations of anti-Semitism were swift, loud, and numerous.” Lippman stresses that “while heated discussion and legitimate criticism are both welcomed, the kinds of attacks made against Seven Jewish Children deflect attention from the very issues it raises for discussion.” Silencing work that speaks about Palestine is a normal, everyday affair: “Rather than engage with the substance of the play, these critics ignored IJVM’s invitations to come to see the play and discuss it with us and others—they merely sent letters of protest to the media.”

Also in 2009, the Koffler Centre for the Arts commissioned Toronto artist Reena Katz to curate each hand as they are called, an exhibit celebrating the artist’s Jewish roots and the Jewish history of Kensington Market. Despite the project itself having nothing to do with the occupation of Palestine, the Koffler Centre ended the exhibit and their association with Katz after learning about her history of Palestinian solidarity activism (Lu). The occupation of Palestine is an artistic issue because for artists like Reena Katz, artists who dare express solidarity with Palestine, their art, regardless of its content, becomes subject to political profiling. The silencing machine forces artists to choose between their artistic careers and legitimate critique of the state of Israel, even when the critique happens elsewhere. The occupation of Palestine is an artistic issue because supporters of the state of Israel try to force it to not be an artistic issue. 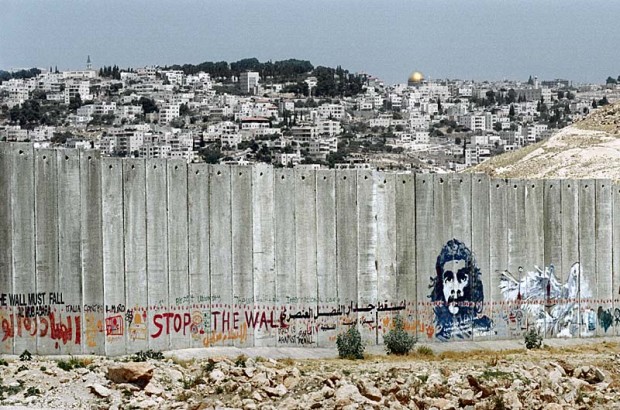 Wall in Palestine via Creative Commons

The occupation of Palestine is an artistic issue because artists do not create in isolation: we are part of a global community of artists, and our artist counterparts in Palestine call upon us to act in solidarity and observe a cultural boycott of Israel. In 2006, a network of Palestinian artists asked us international artists to join “in the boycott of Israeli film festivals, Israeli public venues, and Israeli institutions supported by the government, and to end all cooperation with these cultural and artistic institutions that to date have refused to take a stand against the Occupation, the root cause for this colonial conflict” (Palestinian Campaign). This year, again, Palestinian performing arts organizations and artists collectively called upon “fellow artists and cultural organizations to condemn the current aggressions against Gaza and the occupation of Palestine through petitions, protests and statements” and specifically to support “the Palestinian cultural and academic boycott of Israel” (Palestinian Performing). They are not calling for the boycott of a people or a nation, but of an oppressive state. As it was in South Africa, the boycott is a tool the international community can use to pressure Israel and Israel’s allies (including Canada) into ending Israeli apartheid.

The occupation of Palestine is an artistic issue because the way art lives in occupied Palestine is an exemplar of the urgency, the necessity, the power of art in the face of oppression. The way art lives in Palestine reminds us of its ability to exist and resist. The occupation of Palestine and subsequent border restrictions starve Palestinian artists of resources, but they find a way to create and innovate. Mohammed al-Hawarji, without access to paint, took to his canvas with curry and cumin; his work subsequently garnered international attention for its multisensory engagement of smell as well as sight. The occupation of Palestine and the Western media culture that supports it prevents Palestinians from speaking the political truths of their personal lives in the rare moments when they do have access to media.

Through art, however, their truth finds a way: activist Rafeef Ziadah’s poem We Teach Life, Sir responds to a moment when a journalist asked a loaded and leading “Don’t you think that everything would be resolved if you would just stop teaching so much hatred to your children?” Ziadah’s piece recalls the pressure in the moment to resist saying anything that could feed stereotypes of Palestinians (“not exotic, not terrorist”) and the journalist’s own prescribed rules (“Give us a human story. / Don’t mention that word ‘apartheid’ and ‘occupation’. / This is not political”). However, in the piece itself—her performance of it went viral online—she answers the question with unbridled honesty and artistry: “We Palestinians teach life after they have occupied the last sky. / We teach life after they have built their settlements and apartheid walls … No soundbite will fix this … We Palestinians wake up every morning to teach the rest of the world life, sir” (Ziadeh).

The occupation of Palestine is further an artistic issue because Palestinian artists cannot nurture and expand their practice through tour and exhibition, the way free artists do elsewhere. Indeed, since the creation of the state of Israel in 1948, imagined borders and eight-metre-high walls have prevented Palestinians from being able to travel through the land their ancestors called home for time immemorial. And yet, Palestine pushes back: The Palestine Festival of Literature gathers artists and puts them “on a bus that travels from one Palestinian city to another, breaking down a state-sponsored system of imposed isolation and ignorance” (Abulhawa). The occupation of Palestine is an artistic issue because the ways Palestinians make art in spite of and in response to their oppression is an incredible demonstration of how culture is a tool of resistance. The occupation of Palestine is an artistic issue because in Palestine, the spirit of survival lives in all dimensions of art: not only in the content of art but also in its forms, relationships, and ways of dissemination.

The occupation of Palestine is an artistic issue because artists have real power to destabilize the structures that oppress them. Israel’s current assault on Gaza was sparked by the kidnapping and shooting of three Israeli teenagers in the West Bank by Palestinians. Within a week, Israel had named suspects and ordered the demolition of their family homes. Three years earlier, Juliano Mer-Khamis—son of a Palestinian father and Jewish-Israeli mother and founder The Freedom Theatre in the West Bank’s Jenin Refugee Camp—was assassinated by a masked gunman just outside the theatre grounds. Mer-Khamis, too, was an Israeli citizen, but in less than two days Israeli authorizes abandoned the investigation of his death (Issacharoff and Harel). Israel was not interested in justice for Mer-Khamis because they knew his art challenged the state; they knew his art was powerful, popular, and already stimulating change. They saw that the occupation of Palestine is an artistic issue.

Abulhawa, Susan. “Imagination has no substitute: Reflections on Palfest in Gaza.” The Electronic Intifada 7 June 2013. Web.

Arnold, Janice. “Corrie play not helpful to dialogue.” All About Jewish Theatre. Web.

This piece was originally published as an editorial in alt.theatre: cultural diversity and the stage 11.2 (2014): 8-9.