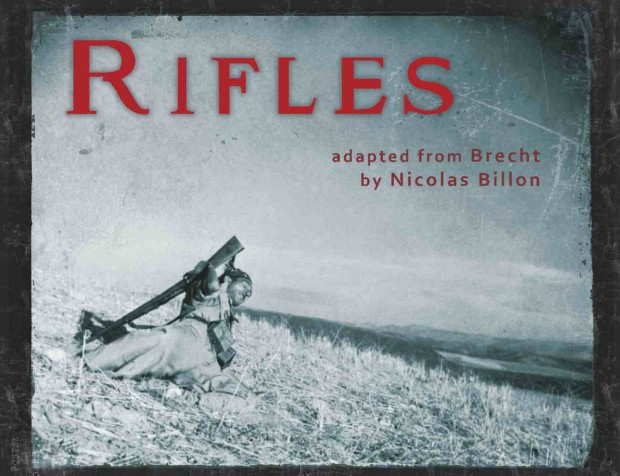 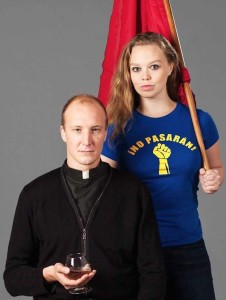 Happy Holiday Season to everyone.

We are hard at work on our newest creation, Rifles as part of The Next Stage Theatre Festival this January at The Factory Theatre in Toronto. 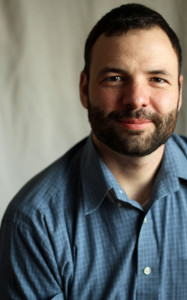 This new adaptation is based on Brecht’s little-known masterpiece, Senora Carrar’s Rifles, written in 1937, which Michael directed last year as his Shaw Festival Director’s Project.

This is Nicolas’ first script for the stage since winning The 2013 Governor General’s Award for Drama for his trilogy Fault Lines. 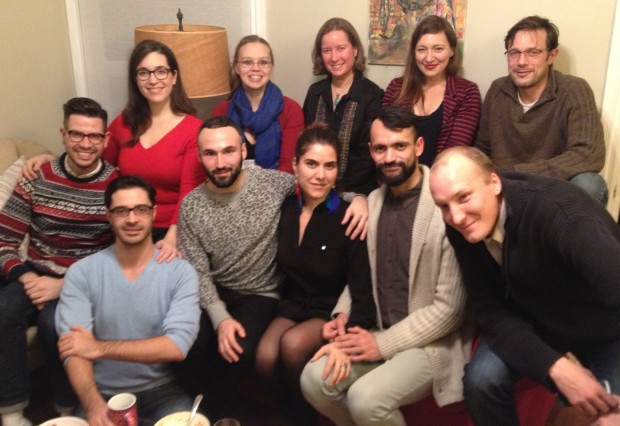 HATCH artistic teams, Harbourfront Centre Communications staff and us, getting together for a little pre-season potluck

As we announced earlier this year, Praxis Theatre is guest-curating Harbourfront Centre’s 2014 HATCH season of new performance experiments. As curators, we were particularly interested in looking at projects that would include experiments in how social media can be included in the development and/or performance of new works.

We’re very happy to say that we have selected our artists for 2014, and while Harbourfront Centre will be launching an awesome new web portal for these artists and their work at HATCH in January 2014, we’re providing you with a sneak peek today of who they are and what they’ll be working on over the next 5 months.

We invite you to take a look, and even engage with their projects online as they develop.

Why do we yearn to leave a legacy behind? #legacy features Twitter and three women over the age of 65 who are looking to make the most of it.

This interactive performance project brings three women over the age of 65 up-close and personal with social media in general–and the Twitterverse in particular–in order to consider how we might leave a lasting impression—and how it should be hashtagged.

What happens when the promise of a perfect future hangs on the one thing out of your grasp?

BroadFish is a live theatre experiment by acclaimed performer Melissa D’Agostino that integrates folktales, music, improvisation, and motion pictures to explore the thin line between reality and fantasy, relationships and romance, and the power of myth in our everyday lives. By plunging into the wild world of female stereotypes, BroadFish considers traditional attitudes toward relationships, happiness, and romance, investigating how they’ve evolved and degenerated through the Internet, social media, and digital technology.

The Ballad of _______ B brings together a young refugee’s obsession with opera diva Maria Callas and the queerness of the imagination to centre stage.

The performance is conceived as a character study of _______ B, a once “clean-cut, fresh-faced 18-year-old” refugee whose story appears as a vocabulary lesson in the pages of an instructional ESL book. This work marks a radical departure for artist Francisco-Fernando Granados, from action-based, conceptual approaches to experimental explorations that incorporate digital media, narrative, and recitation.

Social media billionaire Caleb Smith is on a mission. Racing against a terrible terminal illness, he is embarking on a deep space voyage with the secret goal of cheating time and death. But when something goes horribly wrong, can you help make a gut-wrenching life-or-death decision? 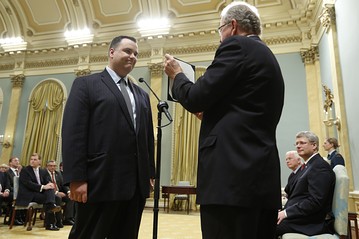 Hon James Moore being sworn in as new Minister of Industry. The Globe and Mail reported Ministers with new portfolios were given ‘enemy lists’ during this federal cabinet shuffle.

Saturday morning I woke up to discover the Federal Minister of Industry, James Moore, took to Twitter to respond to one of my tweets, which he deemed “false”.

It started with his tweet below, which I never saw, because I “have been blocked from following this account at the request of the user”.

I remember this “blocking” occurred roughly a year-and-a-half ago during The Freefall Festival. I was debating the merits of Conservative cultural policy on Twitter with Moore during Jonathan Goldsbie’s Enchanted Streetcar Ride. Soon after I mentioned that our hashtag #route501 was trending above the Ontario provincial budget, Moore proceeded to block me.

Heavens. I sure hope not…. Thank you NDP for the enlightening mail out. “Hope is better than fear”… Indeed pic.twitter.com/8ZfzilcCun

As if hope was the exclusive providence of mindless platitudes…. But this is a story about specific facts, so I will refrain from commenting further. Because I am blocked from seeing tweets by Minister Moore, it came to my attention when it was quoted by Kelly Nestruck, Theatre Critic for The Globe and Mail (who has not blocked me, yet).

Grammatically, you are. MT @JamesMoore_org Heavens. I sure hope not…. Thank you NDP for the enlightening mail out. pic.twitter.com/ZpiU8yOHM2 — J. Kelly Nestruck (@nestruck) December 6, 2013

When I saw this, what didn’t come to mind was grammar or Layton. What occurred to me was that Moore’s tweet was extremely rich. As a Cabinet Minister his staff would have been responsible for putting together one ‘Enemies List’ for incoming Heritage Minister Shelly Glover, and he would have received a second list to be brought up to speed on the “enemy” situation from the people that brought you Industry Minister Christian Paradis.

So given that Moore was involved with not one, but two sets of enemy lists during the cabinet shuffle several months ago, I tweeted this:

@nestruck @JamesMoore_org Haha funny except he really did have binder of arts enemies & pass it on to predecessor & this is well documented.

Of course by “predecessor” I meant “successor”.

There followed a brief conversation between Nestruck, playwright Sean Dixon and myself about whether the NDP used apostrophes properly in their mailings. Went to bed early enough to avoid The Raptors embarrassing themselves, and woke up to this tweet:

I was confused by this tweet by a Minister of the Crown in response to allegations that he and his office created lists of enemies at the request of, (say it in your best Duffy Baritone) The P.M.O.

“sent a memo asking for lists of “enemy stakeholders” for new cabinet ministers.”

Is The Honourable James Moore calling The Globe and Mail “liars”?

“For those of us of a certain generation, it evokes nothing less than thoughts of Nixon and Watergate.”

On July 24, 2013. The Toronto Star’s Susan Delacourt reported over 200 civic-society groups, including Amnesty International Canada and Oxfam Canada, had asked for access to enemy lists, but were being stonewalled by the Harper Government:

“It is worrying more widely… with respect to the state of democracy in Canada. Plain and simple, in a healthy democracy government does not publicly talk of its critics and detractors as enemies.” 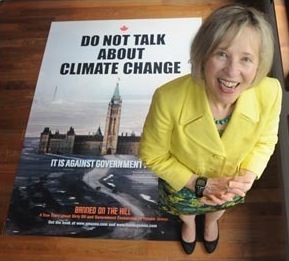 Franke James discovered through FOI requests proof she had been placed on an ‘enemy list’ that caused govt officials to interfere with her work because she created art about The Tar Sands.

I am asking these questions non-rhetorically, because for Moore’s tweet to be truthful, then the answer to each must be “yes”.

So we are left with two versions of the truth:

A massive conspiracy involving The Globe and Mail, The Toronto Star, a broad spectrum of civic society, and even a member of Moore’s own caucus, which has colluded to make us falsely believe Cabinet Ministers in The Harper Government created and received ‘enemy lists’ during the last Cabinet shuffle.

Harper Cabinet Ministers and their offices made and received ‘enemy lists’ as requested by PMO.

Perhaps the Minister mis-tweeted and this was just a Fordian slip? Getting a bit tedious being asked to believe in the absurd as plausible these days.