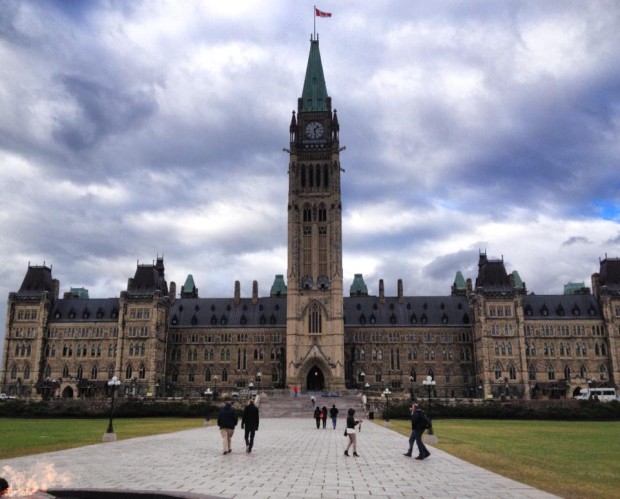 Tommy and I (left) on our way to Parliament to check out Question Period on Monday Nov 18. Photo Aislinn Rose

At every stop along the #G20Romp tour we have provided the same context to our participant detainees – the almost 300 Canadians from across the country who have participated in telling the story of what happened to people at G2o Toronto in 2010. We said, “Hopefully, if enough people do it and we gain enough momentum, when we conclude the tour in Ottawa Members of Parliament will also do what you are doing, and stand up for civil rights by playing detainees in the detention centre.”

So there had been a big red circle around Wednesday November 20th in our calendar for a long time: the day we would find out whether or not we were nuts, lucky, or both.

Tommy Taylor goes on CBC Radio’s Ottawa Morning. Makes a pitch for MPs to join us onstage. Listen to his interview here.

News breaks that the RCMP believe Prime Minister Harper’s Chief of Staff Nigel wright committed bribery and fraud in connection with the ongoing Senate Scandal. Total radio silence from #cdnpoli journalists we had been connecting with as the biggest Parliamentary story of the year is breaking. Uh oh. 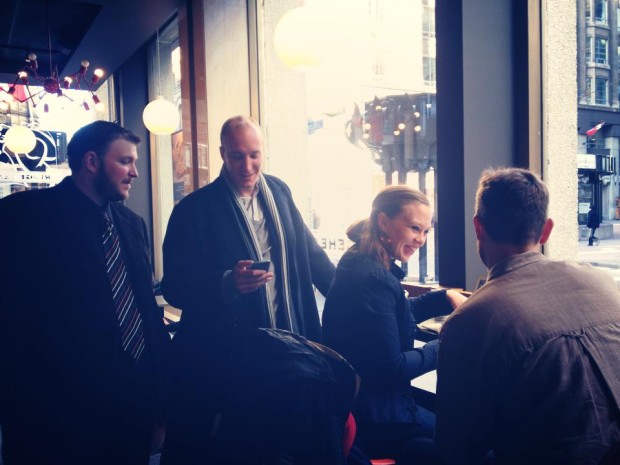 The whole #G20Romp team meets up at a coffee shop before heading off to a reception for the production on Parliament Hill organized by  The Honourable Andrew Cash, Member of Parliament for Davenport.

Every MP, from every party, received 2 email invitations and 1 colour paper invitation to the reception. Still not clear if anyone will attend.

The reception for You Should Have Stayed Home takes place on Parliament Hill in Room 601, Centre Block. A number of Members of Parliament, media and Parliamentary staffers attend: 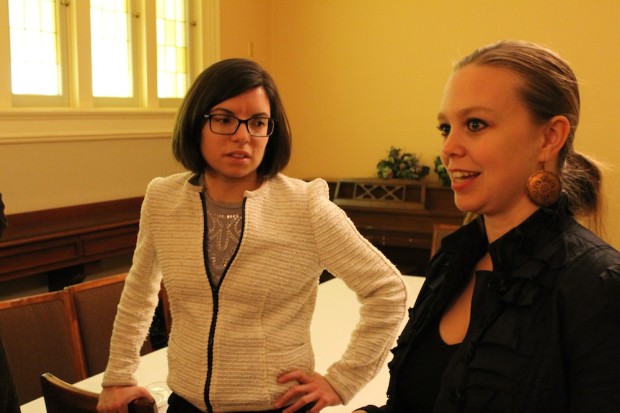 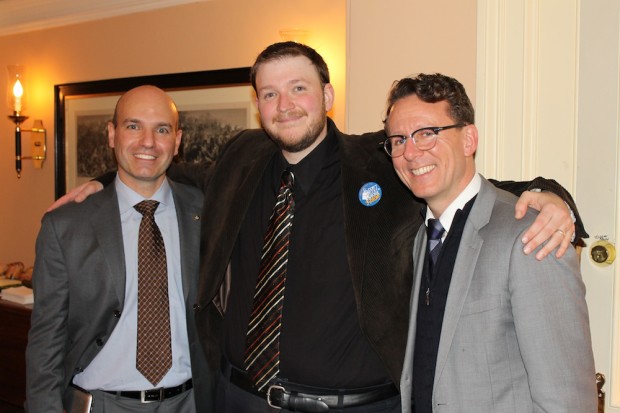 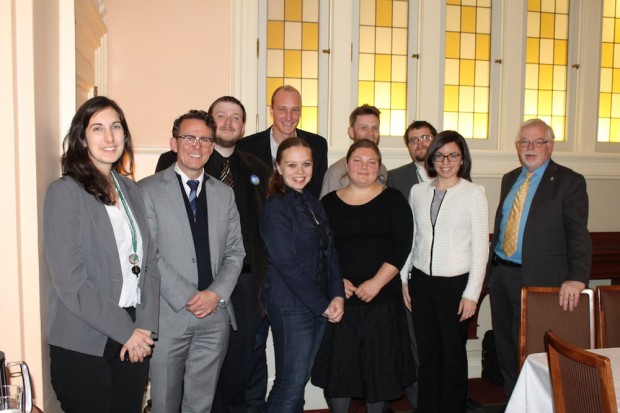 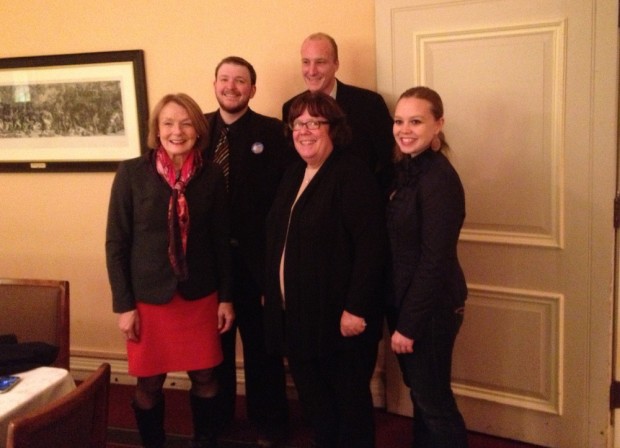 The reception goes great. Many MPs tell us they wish they could join us in the cage, but have prior commitments, not the least of which is a debate occurring at 9:30pm that night on sending aid to The Philippines. D’oh, that’s about the same time You Should Have Stayed Home will be ending onstage…. Nobody panics, Peggy Nash and Andrew Cash tell us they’ll see us at the theatre tonight. We say great and ask no questions about how that will work with their Parliamentary schedules.

On our way out, the whole #G20Romp team meets MP Pat Martin. I deeply regret not telling him that he is missed on Twitter.

The team regroups for some sub-par french fries at a sub-standard pub. We discuss the surreal quality of the day so far, and review options that will allow MPs to be in the show and make it back to Parliament for 9:30pm.

Rehearsal. 17 detainees arrive to learn the scene, including our 2 MPs. Andrew Cash live-tweets some of the rehearsal:

When the rehearsal ends, we realize no one has any pictures of this momentous occasion! Quickly, those of us still in the room pose for a hastily arranged photo.

At this point, the issue of timing and schedules needs to be addressed. We devise a plan where after the scene is performed, MPs will exit the stage to the dressing rooms where they will have preset their belongings. This will allow them to see most of the show, perform in it, and still make it out of the theatre in time to return to Parliament for the debate.

An amazing performance by Tommy Taylor to a packed Arts Court theatre on opening night. Here’s what the thing we always wanted to do looks like from the booth. MPs on stage in the cage: 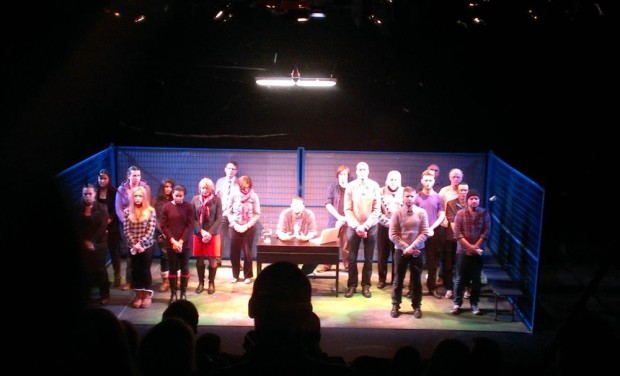 I once titled this photo, “This is what democracy looks like”. I wasn’t wrong, but this is what it looks like too.

Several people have already asked me, “So was this just an NDP thing or what?” No. Not strictly speaking, although certainly the party most associated with social justice was the one that hosted us on the hill and performed in the show, and they deserve mad props for that.

A quantitative analysis of MP tweets and RTs to the #G20Romp hashtag would also reveal Liberal MP Carolyn Bennett as another huge supporter of our endeavours. Unfortunately, she let us know she was on a flight the night of our show. We also heard back from Green Party MP Elizabeth May, who sent her regrets from a climate change conference in Warsaw. So definitely the NDP came through for Praxis big-time – but on another day, in different circumstances, a multi-partisan cage might have been possible. We did not receive any expressions of  interest from any of the Conservative MPs, all of whom were invited.

The entire #G20Romp team is pretty inspired by the participation of the Honourable Members of Parliament and we all went to bed very late, not really believing we actually pulled it off.

An invitation for MPs to join You Should Have Stayed Home 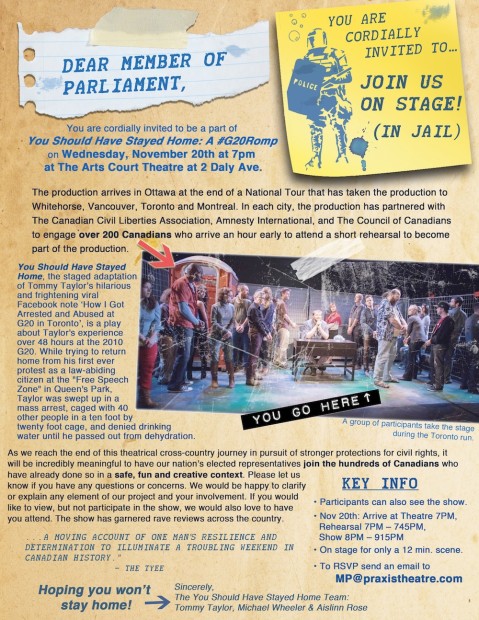 On Monday Dec 18 all 308 Members of Parliament will receive this invitation. CLICK TO ENLARGE

After 34 acclaimed performances of You Should Have Stayed Home in Whitehorse, Vancouver, Toronto and Montreal, we conclude our tour in Ottawa on November 20th. It is our hope some of our nation’s elected representatives will join us onstage on opening night.

The production will have a reception on Parliament Hill, the same day as this performance. We are extremely grateful to The Honourable Andrew Cash, Member of Parliament for Davenport, for organizing this event where MPs of all stripes can meet us and discuss the opportunity.

Reception for You Should Have Stayed Home on Parliament Hill

Hundreds of Canadians have already stood up for civil liberties in a safe and creative way by participating in a short scene in the middle of the show. Before each performance we’ve led a discussion about Canada’s Charter of Rights and Freedoms and how it’s been significantly weakened by G20 Toronto — a period Ontario Ombudsman Andre Marin called, “The most massive compromise of civil liberties in Canadian history.”

We hope Members of Parliament will be inspired by this level of engagement by  ordinary citizens across Canada, and also stand up for civil liberties.

We have already confirmed participation by a few MPs, and we’re hoping for more. We’re encouraging MPs from all political parties to join us. Civil liberties are not a partisan issue. Everyone from libertarians, to socialists, to all of those in between, can find rare common ground on this subject. This important consensus can be communicated theatrically.

If you are an MP:

Please get in touch by email: MP@praxistheatre.com.

If you are not an MP, but live in Ottawa and would like to join us onstage:

Please get in touch by email: participate@praxistheatre.com.

If you are not an MP, but you would like to see your MP participate:

Please send them this post. If you tweet to them, be sure to use #G20Romp. Also, be sure to be nice.

Only through real momentum will we fully realize this goal.  We are so darn close and we need your help. 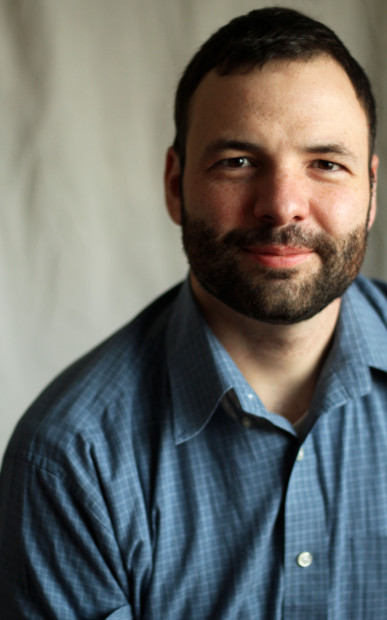 A sincere congratulations goes out to playwright Nicolas Billon, who has just been announced as the winner of the Governor General’s Literary Award for Drama. Billon’s collection of plays FAULT LINES was published by Coach House Books earlier this year, and includes the award-winning plays Greenland and Iceland. 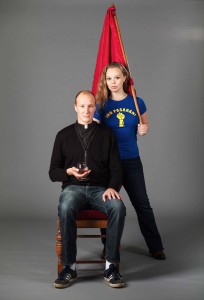 Rifles will premier in January, 2014 at the Next Stage Theatre Festival

This announcement comes at a particularly exciting time for Praxis Theatre. We have recently begun a collaboration with Billon on a new work called Rifles. The play will be an original adaptation of Brecht’s Spanish Civil War ‘Call to Arms’ Senora Carrar’s Rifles, which Michael directed as a Shaw Festival Director’s Project last year.

We’re happy to be premiering this piece as part of Toronto Fringe’s Next Stage Theatre Festival this coming January. Having produced 6 Fringe shows over the last 10 years, we’re pleased to continue our association with such an important part of the Toronto theatre ecology.

Rifles will be presented as part of Next Stage on the Factory Theatre Mainstage from January 8th to 19th. Tickets go on sale soon.