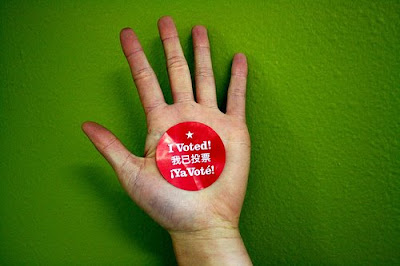 On Monday February 24th CAEA held its annual AGM. Though attendance in the past has been so poor that quorum has not been achieved, members turned out in exceptional numbers this year. Debate from the floor made clear the motivation behind this unparalleled presence. The Member Resolution put forward by TAPA Indie-Caucus member Mark Brownell prompted this surge in numbers—artists came to vote.

The resolution (with minor amendments), passed with overwhelming support; only one individual voted against it.

Those who spoke in support of the resolution—which deals with member-created work —urged the audience to consider the specific manner in which the way that artists work has changed. Individual members spoke for those from across the country who could not be present, reporting that they see their impetus to create as being stymied by the association. A particular point of emphasis noted the distinction between producers and member-creators. A second distinguishing point was the necessity of making this discussion a national dialogue. The President himself could not help commenting “I am getting a strong message here.” He explained that member-initiated production has been put on Council’s work plan for the next year.

With respect to concerns about the resolution, one speaker suggested that CAEA avoid an influx of too many member-creators and make the agreements available to these artists more difficult to access.

Council meets in March. Equity by-laws place the command of this Member Resolution firmly in the hands of Council. The membership present at the AGM has voted, with quorum. Council now has the opportunity to vote and determine the future of this resolution. Attendance on Monday evening must send to Council a clear signal as to how the resolution and its outcomes might be handled. 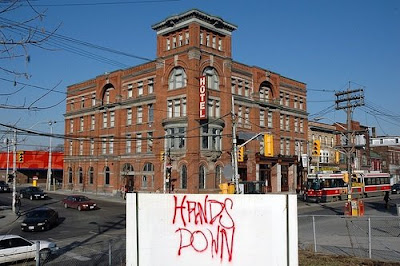 Launched in 2008, The Performance Gallery (Inside the Box) was one of the SummerWorks Theatre Festival‘s many new initiatives. In its inaugural year, the gallery, which took place on the 2nd floor of the Gladstone Hotel, featured an eclectic group of artists offering everything from short plays to dance to performance art to improvised concerts. This year it returns to the Gladstone (Aug 6- 9 & Aug 13-16th) and is seeking site-specific but not necessarily site-themed pieces (7-10 minutes) in all performance mediums. 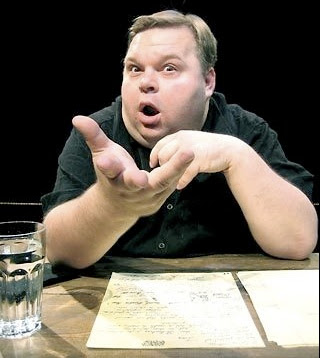 Mike Daisey’s visit to Canada was overshadowed by that of another charismatic Yankee who rose to success through a combination of excellent public speaking skills, fully harnessing the potential of the internet, and the notion that a broken system requires change. So it goes.

Mike Daisey performed this month at Vancouver’s PuSh International Performing Arts Festival, and judging by the overwhelmingly positive response he received from folks like Simon Ogden of The Next Stage, America’s most prolific and relentless theatre blogger seems not to have disappointed with his abilities as a performer in his visit to Canada.
While he was there, Daisey was not blogging about the scenic wilderness or the high quality of our maple syrup. He was responding to the firestorm he started off, when he pointed out the numerous parallels between American MFA acting programs and the characteristics of a Ponzi Scheme.
The basic premise of Daisey’s argument is thus: A system that encourages artists to incur $100,000 + debt while the average wage of graduates hovers somewhere below the poverty line, is a corrupt one that will eventually collapse under the weight of its inability to provide a return for its investors.
This scheme implicates academia, a large swath of artistic institutions, and of course American Theatre Magazine, whom in a matter of months it seems Daisey has singlehandedly de-legitimized as voice genuinely representing the interest of American artists through a critique of its role promoting and benefiting from deeply flawed institutional and educational models.
These are all very good and valid points, but they raise an even more interesting question for North American theatre artists who enjoy their beer with a higher percentage of alcohol under the benevolent rule of a Constitutional Monarchy:
If it costs roughly $40,000 a year to go to New York University, and $4000 to go to York University, is NYU ten times “better” than York? What added value does your extra $36,000 a year buy you?
Although there are a number of excellent undergraduate or certificate conservatory programs, there are actually very few MFA theatre programs in Canada period. What’s up with that? Are MFAs necessary at all – or do we not have enough? Two thirds of the cast of our recent production of Stranger (and the producer) trained in the US after completing an undergrad degree in Canada…
Tweet
February 18, 2009, by Praxis
2 comments 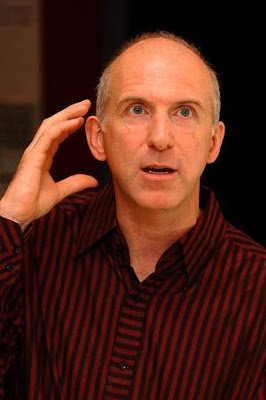 Time to find something new to gossip/speculate aimlessly about. After an exhaustive search, Matthew Jocelyn was announced this morning as Artistic and General Director of Canadian Stage Company.

Was this the right pick? This was not one of the old guard names that had been thrown around ad nauseum over the past few weeks. On the surface though, a born and bred Torontonian who is bilingual and has significant international accomplishments under his belt seems just about right. Care to disagree?
Tweet
February 15, 2009, by Praxis
Comment

I am putting forward an individual member’s motion at Equity’s next AGM on the evening of February 23rd.

The motion is as follows:

“WHEREAS Equity members who create their own work (Member-Creators) are under-represented on Council;

AND WHEREAS there is dissatisfaction among such Equity Member-Creators with the current options to engage Equity artists, including The Independent Artists Projects Policy (the “Indie”), Small Scale Theatre Addendum and Co-op Guidelines that are available to its members;

BE IT RESOLVED THAT steps be taken by Equity staff to address this dissatisfaction by consulting with a committee made up of volunteer CAEA Member-Creators whose purpose is to field concerns and suggestions, gather information and seek advice from fellow CAEA members as well as examine alternative options, devise revisions or alternatives to the current agreements and policies and report back to the business representatives, senior staff and the membership at large.”

I am asking all Equity members in good standing to arrive at 6 p.m. sharp and support this motion when it appears on the agenda. I also request that members be courteous and polite during this meeting. A member’s motion is rare and the President brought this section of the AGM to the general membership’s attention in good faith and with a desire to let all points of view be heard. Now is the chance for you to make a difference in shaping the future policies of your association. We hope that you will attend.

Praxis Theatre is a member of the Indie Caucus and supports this motion. We encourage CAEA Member-Creators who share our concerns to arrive before 6pm at the Austin Gallery, 1 King St W., 12th floor, Toronto. (@ King Subway Stn.) on Monday February 23rd, 2009.
Click below to read the CAEA announcement:
Notice of National Annual General Meeting
For more information, click the link below to visit the Facebook group:
Artists for a new CAEA Indie Agreement

Globe and Mail writer for a day 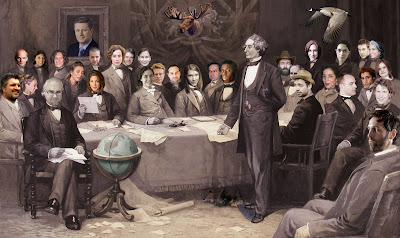 Finding a way to project this image of Department of Culture’s recent Senate appointments was what started the whole (Wrecking) ball rolling for me.

What the heck just happened?
By Michael Wheeler
In a classic case of careful what you wish for, days after wondering aloud to a colleague how anyone ever got to be part of a Wrecking Ball, I found myself at the centre of the technical side of one.
This was hilarious for many reasons. These included:
This all occurred over 48 hours, and I gotta say: the one thing I am learning about the theatrosphere is that it pays to act fast and be decisive.
Click the link below to read my Globe and Mail debut:
The Wrecking Ball from top to tail: Michael Wheeler reports
Click the link below to view a high res-photo of the new DoC Senate:
Department of Culture 2009 Senate with legend here.
Tweet
February 8, 2009, by Praxis
Comment 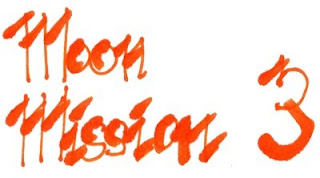 Moon Mission 3
Who: Evan Webber, with actors Hannah Cheesman and Ker Wells, and design by Sherri Hay.
Where: The Rhubarb Festival at Buddies in Bad Times Theatre, Toronto, Canada.

When: February 11th-15th @ 8 pm.
What: A science-fiction romance play about the return of humans to the moon.
Why: Because the astronauts are praying for you.
Web: www.relativesafety.com
Buzz: The buzzing is because we’re running the contact mics directly into the PA. Don’t worry, it’s intentional.
Tweet
February 6, 2009, by Praxis
Comment

By the way, this weekend is your last chance to catch the show.

We’re also offering a special blog-reader discount for our closing weekend. Here’s how it works: If you’re buying your tickets at the door, say the words, “Theatre is territory” at the box office and we’ll reduce the price of your ticket by $5 . . . down to a cool $15. Sweet!

Do we need artists to create the new creative economy? 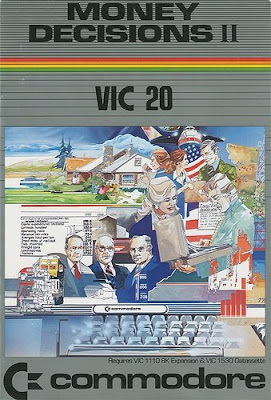 Back-to-back articles have appeared in Toronto’s two most-read newspapers, The Toronto Star and The Globe and Mail, regarding creativity and artists that seem to underscore a dissonance between government spending and economic objectives.

The first piece in The Star titled “Report urges ‘creativity-oriented economy’ for Ontario”, summarizes a multi-million dollar report prepared for the provincial government on how to prepare our economy for the future. Amongst the recommendations:

“- Set a goal of having more than 50 per cent of Ontario’s employment in “creativity-oriented jobs” by 2030. Currently, 30 per cent of jobs are in that category, accounting for nearly half of all wages.”

The second piece in The Globe titled, “Starving artists? That’s not far from the mark”, analyzes a report based on the 2006 census commissioned by The Canada Council for the Arts, The Ontario Arts Council, and The Department of Heritage. Amongst the conclusions:

“What makes the situation even more distressing is that artist earnings have been decreasing since 1990 – a decline likely to intensify over the next two years. While average earnings for the overall labour force rose by almost 10 per cent from 1990 to 2005, artists experienced a slide of 11 per cent – to $22,731 from $25,433 – at the same time as the cultural-sector work force tripled in size. Actors experienced the sharpest decline in average earnings among artists, dropping 34 per cent to about $18,000 in 2005.”

Both of these studies come on the heels of the Department of Heritage announcing a new strategy to spend $25 Million to create The Canada Prizes, an American Idol-style competition that uses big money cash prizes to attract non-Canadian talent for a one week in June in Toronto.

These two studies seem to contrast greatly with the latest funding announcements made by brand new Heritage Minister James Moore. Will the trickle down economics of this one-week bonanza reap dividends for taxpayers seeking to revitalize a domestic creative economy? What role do artists play in a society seeking to increase creativity-oriented jobs by 20%? If your country’s artists are living in poverty and the situation is getting worse, can you expect to make this economic shift?
Tweet
February 2, 2009, by Praxis
Comment 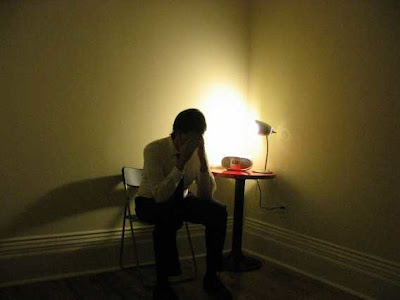 @ 7 pm!
What: Part interview, part performance, artist and journalist Chris Dupuis chats with artists presenting work at the 30th Rhubarb Festival.
Why: Do You Like Talking? Do You Like Art? Do You Like Chris Dupuis? If you answered YES to any of these questions, this show is for you.
Web: www.chrisdupuis.com
Buzz: May contain Nudity, Mature Content, Foul Language, Cigarette Smoke, Strobe Lights, Self Indulgence, General Wankery .
Older Posts »