Your process is showing: HATCH ’12 – Mortified

I’m a big fan of Harbourfront’s HATCH program, and the 2012 season begins this week with Mortified, a performance that “creates a sonic experience through movement and mayhem.”

Jenn Goodwin and Camilla Singh invited me into their jam session one morning late last month, and I was able to get a glimpse of their process as they rocked their drums for hours. Here’s a piece that reflects the work that I saw.

Check out the sole performance of Mortified: 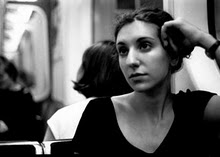 Shira Leuchter is an actor who also makes performance stuff and other art stuff. She co-stars in the short RUNG, which will be having its International Premiere at the Tribeca Film Festival later this month. She is an Associate Artist with UnSpun Theatre.
Filed under Harbourfront Centre, Your process is showing.