Shaw Festival Directors Project: ¡No Pasarán! (They Shall Not Pass) 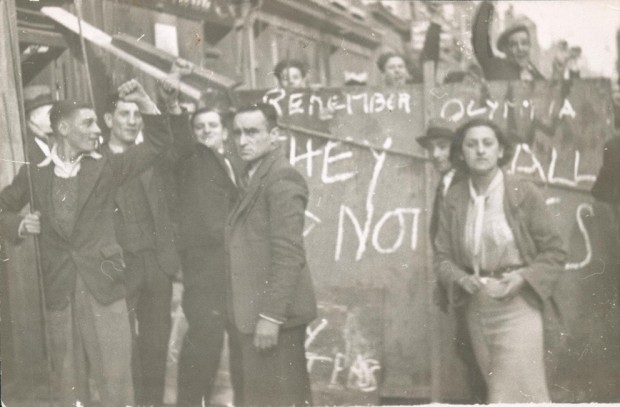 Anti-Fascist activists at The Battle of Cable Street (London, 1936)

This post continues my efforts as a director of Senora Carrar’s Rifles to stage the piece as per Brecht’s instructions “with a documentary film showing the events in Spain, or with a propaganda manifestation of any sort.” 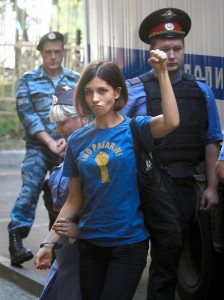 First made famous by French General Robert Georges Nivelle at the Battle of Verdun in WW1, They Shall Not Pass became an expression associated with anti-fascist movements around the world during The Spanish Civil War. It became the central refrain by La Pasionaria (Dolores Ibárruri Gómez) in her speech to Republican forces defending Madrid while it was under siege by Franco’s fascist troops in 1936.

A militant activist and communist politician, La Passionaria was widely regarded as one of the greatest public speakers of her era. When she returned to Spain after Franco’s death forty years later, she was re-elected as a deputy to the Cortes – the same region she had represented during the Second Republic when she delivered ¡No Pasarán!

Only months after the speech was first delivered it became the rallying cry of more than one hundred thousand anti-fascists who flooded the streets of London, England during The Battle of Cable Street, which successfully thwarted a march by The Union of British Fascists through Jewish neighbourhoods.

The phrase recently leapt back into international awareness when it adorned the T Shirt of Pussy Riot member Nadezhda Tolokonnikova during their August 2012 trial in Russia for creating anti-Putin art.

Confronted with the fascist military uprising, all must rise to their feet, to defend the Republic, to defend the people’s freedoms as well as their achievements towards democracy! Through the statements by the government and the Popular Front (parties), the people understand the graveness of the moment.

In Morocco, as well as in the Canary Islands, the workers are battling, united with the forces still loyal to the Republic, against the uprising militants and fascists. Under the battle cry ‘Fascism shall not pass; the hangmen of October shall not pass!’ workers and farmers from all Spanish provinces are joining in the struggle against the enemies of the Republic that have arisen in arms. Communists, Socialists, Anarchists, and Republican Democrats, soldiers and (other) forces remaining loyal to the Republic combined have inflicted the first defeats upon the fascist foe, who drag through the mud the very same honourable military tradition that they have boasted to possess so many times.

The whole country cringes in indignation at these heartless barbarians that would hurl our democratic Spain back down into an abyss of terror and death. However, THEY SHALL NOT PASS! For all of Spain presents itself for battle. In Madrid, the people are out in the streets in support of the Government and encouraging its decision and fighting spirit so that it shall reach its conclusion in the smashing of the militant and fascist insurrection.

Young men, prepare for combat! Women, heroic women of the people! Recall the heroism of the women of Asturias of 1934 and struggle alongside the men in order to defend the lives and freedom of your sons, overshadowed by the fascist menace! Soldiers, sons of the nation! Stay true to the Republican State and fight side by side with the workers, with the forces of the Popular Front, with your parents, your siblings and comrades! Fight for the Spain of February the 16th, fight for the Republic and help them to victory!

Workers of all stripes! The government supplies us with arms that we may save Spain and its people from the horror and shame that a victory for the bloody hangmen of October would mean. Let no one hesitate! All stand ready for action. All workers, all antifascists must now look upon each other as brothers in arms. Peoples of Catalonia, Basque Country, and Galicia! All Spaniards! Defend our democratic Republic and consolidate the victory achieved by our people on the 16th of February.

The Communist Party calls you to arms. We especially call upon you, workers, farmers, intellectuals to assume your positions in the fight to finally smash the enemies of the Republic and of the popular liberties. Long live the Popular Front! Long live the union of all anti-fascists! Long live the Republic of the people! The Fascists shall not pass! THEY SHALL NOT PASS!

Filed under ¡No Pasarán!, La Pasionaria, Pussy Riot, Shaw Festival Directors Project, They Shall Not Pass.