Your process is showing: Groundswell – The Aftermath & The Debacle 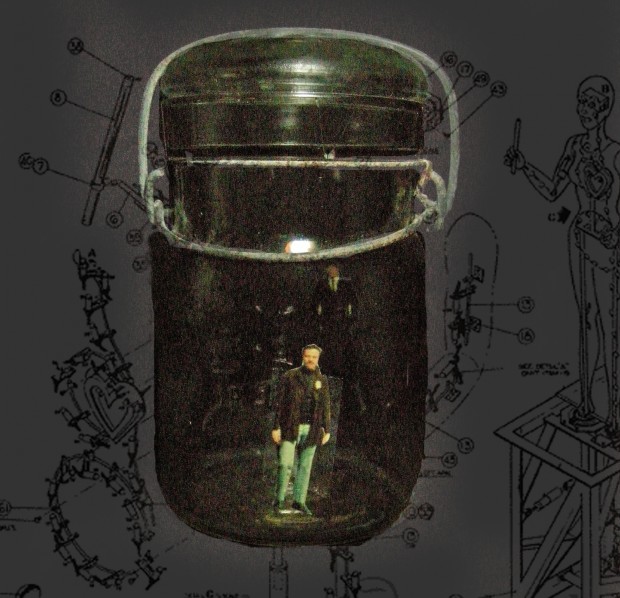 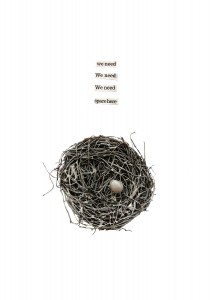 As a follow-up to last week’s post, here are the two pieces that I created as a response to The Aftermath and The Debacle. The three workshop productions that are featured at the New Groundswell Festival this year are so incredibly different from one another – in content, style and approach. Nightwood Theatre’s New Groundswell Festival runs until Saturday December 10th. So you’ve still got time to get there!

Shira Leuchter makes performance stuff and other art stuff. She recently worked with UnSpun Theatre on a new piece that was performed as part of Harbourfront’s HATCH program.

Her website is here and she collects all of her shallowest thoughts here.

Your process is showing: Groundswell – Between the Sheets

Guess what? Nightwood Theatre’s Groundswell Festival opens today! This year, Nightwood has re-envisioned the festival as a national festival of contemporary women’s theatre. The festival offers masterclasses, workshops, readings and more, and it’s all about process, so it’s really fitting that I’ve been invited to sit in on rehearsals for all three workshop productions for this series.

To start, I sat in on a rehearsal for Jordi Mand’s Between the Sheets. It’s directed by Kelly Thornton and features Susan Coyne and Christine Horne. There’s some really lovely work being done here, and I’m not just saying that because Jordi is my cousin. This is the piece that I created as a response to their process. I’ll share the pieces I make based on both The Aftermath and The Debacle very soon.

Shira Leuchter makes performance stuff and other art stuff. She recently worked with UnSpun Theatre on a new piece that was performed as part of Harbourfront’s HATCH program.

Her website is here and she collects all of her shallowest thoughts here.

Women making and attending theatre up. Women in charge of theatre still down. 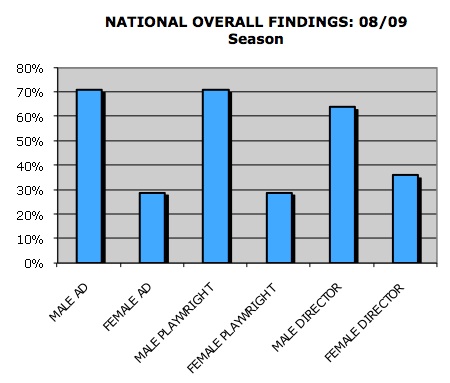 When Rina Fratticelli’s report came out in 1982 revealing the amount of women in power positions in Canadian theatre to be shockingly low, the gender inequality issue was exposed.  Yet, twenty-seven years later the PACT Equity in Canadian Theatre report on gender shows that very little has changed.  In PACT theatres in the 2008-2009 season, women accounted for 29% of the artistic directors, 36% of the working directors and 29% of the produced playwrights.  Primarily men are still running theatre companies across Canada. And the larger the theatre company, the less women in artistic leadership positions.

This is true despite the fact that there are more women in theatre schools and more women in audiences.  According to the same report, almost 60% of the theatre-going audience in Canada is thought to be female and women account for 68% of student enrolment in the performing arts, communication and technologies fields.  Yet, these percentages don’t match the employment opportunities for women.

Why is this happening?  Why has very little changed in over twenty years?  And what is being done about it?  Are we going to be looking at these same statistics twenty years from now?

Kelly Thornton is Artistic Director of Nightwood Theatre, and co-head of the national advisory committee of Equity in Canadian Theatre: The Women’s Initiative, a group of activists whose aim is to formally investigate the status of women in Canadian theatre and develop plans to change existing barriers.  She believes the lack of females is not something done on purpose, but created through subconscious choices by the male artistic directors that run 71% of the theatres in Canada.

“I don’t think they’re actually saying ‘we’ve got to keep women out’ – I just think there is a gender bias to the way we program seasons.  I always use the analogy of a man and a woman walk into a bookstore.  The two will both buy a novel and they will come out with totally different novels.  And it’s based on their gender.  Think of a male and a female AD – they’re gravitating towards stories that speak to them.  And often that has to do with gender.”

Thornton stresses this is not an attack on men, or male AD’s.  It’s about subconscious choices.  “Who better to direct Bob’s play than Bill.  It’s the domino effect.” Yet, when the primary ticket buyer is female, why is this not questioned more often?  Why do women just accept watching male stories, directed by men, as the norm?

Many of these issues were discussed last month as 150 female directors from across Canada came to Toronto to take part in the week-long Directors Summit at the 4×4 Festival, sponsored by Nightwood Theatre. A mix of established and emerging directors participated in master classes, workshops, panel discussions, and seminars.  With the statistics on the lack of gender balance being released this year, an event such as this is not only an opportunity for networking of female directors and theatre workers, but also a step towards solidarity in the face of these shocking numbers. 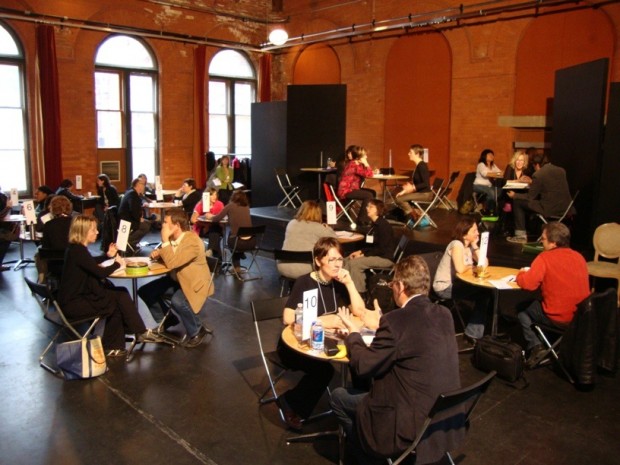 One of the main events of the summit was the Marketplace, where emerging female directors and artistic directors from across the country met in a speed-dating atmosphere.  It allowed emerging directors to meet face-to-face and network with established professionals.  This also ties in with The Canadian Women Directors Catalogue: a comprehensive list of Canadian Women Directors, an initiative by Nightwood Theatre currently in development, which will be sent out to theatres across Canada.  The artistic directors who receive this catalogue will now have faces to put to names.  Thornton hopes the experience will really get artistic directors “thinking about how to actually tangibly effect change by being conscious when they’re programming”.

Perhaps this is the key, as Thornton suggests, to effecting change: “This is a conscious-raising effort on my part.  This is just about staying awake to the issues.  When you’re making your season choices, always look at your roster… and try to include the other half of the planet.  Have the grace to acknowledge the track record hasn’t been good in the past and pay more attention to it in the future….The culture will balance itself if we all just admit there is an issue and then tangibly take it on in our own way.  Think globally, act locally. Do one thing per season that slightly changes the way you work,” says Thornton.

This is not only happening in Canada. In June of this year, Sphinx Theatre Company in Great Britain held the conference on gender Vamps, Vixens and Feminists: The Elephant in the Room.  Among discussions of gender equality, were statistics from a 2006 Women in Theatre Survey, revealing that only 17% of playwrights produced in Britain were female, and only 23% of productions were directed by women.

In America, there has also been a lack of female directors and playwrights.  In April of this year, Emily Glassberg Sands submitted to Princeton University a report entitled: Opening the Curtain on Playwright Gender: An Integrated Economic Analysis of Discrimination in American Theater.  This report examined gender bias against female playwrights in the United States.  Sands showed through experiments that, among other very interesting results, artistic directors believe that a script written by a female pen-name will make less money and be of lower quality than the same script with a male name as the playwright.  Sands also mentions in her report that on Broadway in the 2008/09 season only 12.6% of the plays produced were written by women.

Would it actually affect the economic prospects of the play if it’s written or directed by a woman, telling female stories? In her opening remarks at the Kick Start Reception of the Directors Summit, Shaw Festival Artistic Director Jackie Maxwell spoke of her experience:  “I did this, I got a whole bunch of female directors in and I dug up all the female playwrights from that time period, and I just want to let you know that the sky didn’t fall, that the audiences didn’t go away, that nobody actually knew the difference.  The success was still the same.”

If we are all conscious of what choices we make as theatre practitioners, and if we are all aware of these inequalities, the small changes will become big changes.  As Mary Vingoe, inaugural Artistic Director of the Magnetic North Festival, said while facilitating a panel on Women Directing in Canadian Theatre, “hopefully in ten years we won’t have to be having this same discussion.”

Left to right - Josette Bushell-Mingo, Ross Manson, and Liesl Tommy are each involved in separate presentations in Toronto this weekend.

Through sheer coincidence, all three directors of The Africa Trilogy are mixing it up in the T-dot this week:

After directing the RSC/NAC original production to widespread critical acclaim, Bushell-Mingo has been mentoring directors working on Margaret Atwood’s The Penelopiad as part of Nightwood Theatre’s Directors Summit.

The public presentation of this work occurs November 15 at 3pm and 6:30pm, Dancemakers Studio Theatre.

Having toured Rwanda with Volcano’s Edinburgh Fringe-winning production of Goodness, Manson presents a retrospective of the experience at University of Toronto.

November 15th at 7pm, the George Ignatieff Theatre, U of T campus.

Fresh from the New York Times declaring her production of Eclipsed running at the Yale Repertory Theatre a “harrowing portrait of women fighting to retain their dignity and a sense of self-worth under extreme duress”, Tommy appears on two panels and teaches a Master Class also as part of Nightwood’s Directors Summit.

For full details on price and location of Nightwood Theatre events visit their webpage.