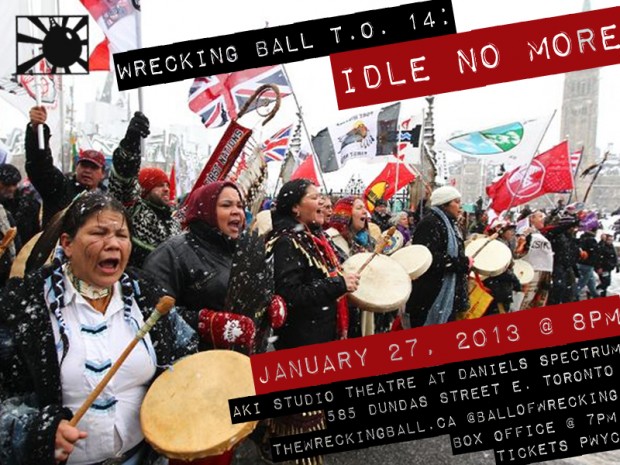 Click the image to find out playwrights involved in Wrecking Ball 14: Idle No More.

Also check it out: The Wrecking Ball has a new National Website! 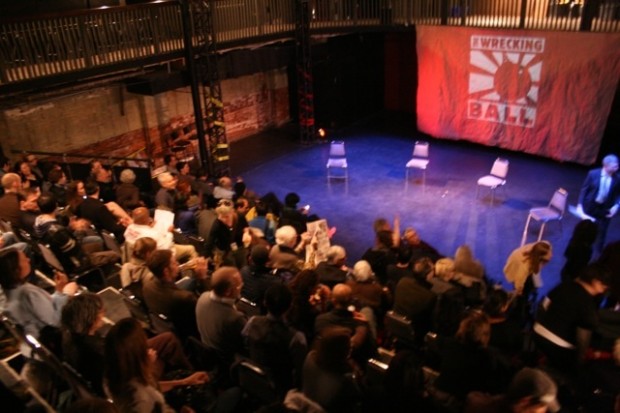 Click the image to find out the entire line up on thewreckingball.ca Photo by Alex Williams

Wrecking Ball 13 Is Twitter-Friendly.
Tweet Seats on the balcony #WB13 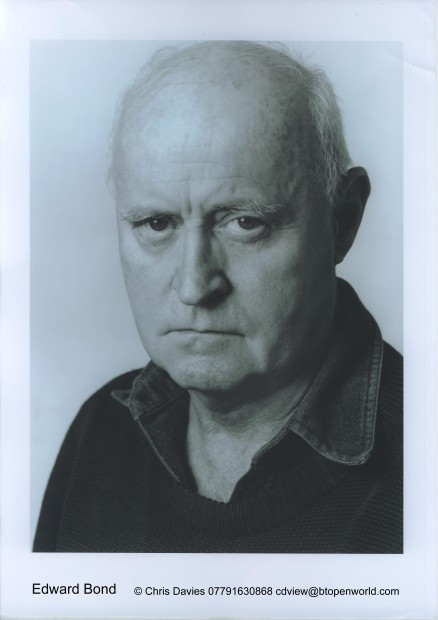 For decades I’ve been a fan of Edward Bond. His plays deeply move me. They upset and haunt me. They assault my assumptions, my orthodoxies about justice, about identity, and about the purpose of theatre. They reveal strange dystopias in familiar rooms. And they force me to consider extreme questions.

In fact, Bond describes himself as an ‘extremophile’, and in a career spanning more than 50 years and 50 plays, it is hard to think of a contemporary dramatist who has thought and written about the extremities of human behaviour with more rigour, consistency and force than Bond has done.

Injustice, violence and the sources of violence are themes that run through his entire body of work. From early plays like Saved, Lear, The Sea, and Bingo, to later work like The Woman, and Restoration, to his recent ‘Chair Plays’ (Have I None, The Under Room, and Chair), Bond exposes the social forces that distort our lives and cause violence, despair, and social madness.

Despite the cruelty and irrationality depicted in his plays, Bond is an optimist. His plays, the fact of writing them, are acts of optimism. He believes drama itself is not so much a reflection of reality but is rather the place we construct reality; it is the means by which we forge our humanity. “Drama is not a luxury of culture but its basis,” he wrote recently.

Today, Bond believes that drama is experiencing its ‘third crisis.’ The first crisis occurred in classical Greek theatre as we began to explore our relationship to the gods, questioning their role and authority, essentially creating the human psyche. The second crisis, Bond suggests, happened in the Jacobean theatre, when God was finally exiled from the stage, and a new self was created, self-questioning and self-sufficient. ‘Hamlet walked out of Christ’s tomb’ is how Bond puts it. But this new concept of humanness also led to the industrial revolution. It allowed a greater rapaciousness, expressed through early capitalism, which colonized the planet, and continues to brutalize millions while happily laying waste to the earth’s ecosystem.

Which brings us to drama’s current third crisis, as Bond sees it. Modern/postmodern capitalism (via technology) has accelerated and extended its global reach and its claims on the self. Bond argues that we need to reinvent our drama so that we can reinvent ourselves. I think it’s so refreshing to be reminded of the potential significance of theatre, its importance, despite whatever we may feel now and again about its marginality.

The Edward Bond Festival, so bravely and doggedly conceived and organized by Alan Dilworth and Maev Beaty, is an invitation to our theatrical community. Through readings, symposia, through the workshop of Have I None, Ryerson’s production of The Bundle, and through the 13th Wrecking Ball, we have an opportunity to engage with Bond’s vast body of work, and to explore a different approach to theatre. Bond will be in attendance to discuss and describe his work and methodology, as will long-time Bond director Chris Cooper. It’s an opportunity to step back for a moment from our own ways of creating and thinking, to listen to some of the difficult things that Bond has to say about drama, about the world, and about what it means to become human. It should be a riveting and provocative nine days. 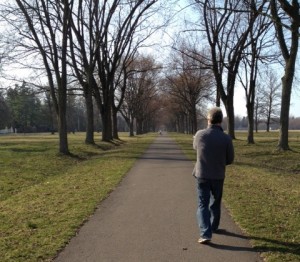 David Jansen is an actor, director, a grey, superannuated student, and a bright-eyed father.

He is thrilled to be working on Have I None with the exceptional cast of Allegra Fulton, Alex Poch-Goldin, and Christopher Stanton.

Are you dying to vote? Wrecking Ball 12 is tonight. 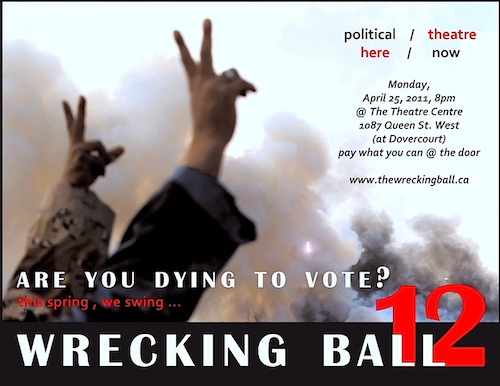 For those of you who like to tweet, and for others who can’t make it to the event in person, you can follow along and join in via the hashtag #WreckingBall2011. Observers are invited to be in conversation with the work, the ideas, and with each other, both during and after each event. With Wrecking Ball events happening across the country, we look forward to the conversation going national as well. For those of you who don’t have twitter accounts, click here for a live feed of tweets from across the country, or simply search #WreckingBall2011 at www.twitter.com.

Exciting news from the Wrecking Ball team in Toronto yesterday revealed that there will be 7 Wrecking Ball events taking place across the country on Monday the 25th at 8pm local time.

Click here for more information on the cities and venues playing host.

If you can’t attend in person but don’t want to miss out entirely, be sure to join virtually on Twitter via the designated hashtag #WreckingBall2011.

You can follow this tag with out without a Twitter account, and there will be Wrecking Ball tweeters at all of these events to fill you in, including @praxistheatre at the Toronto Wrecking Ball at the Theatre Centre. 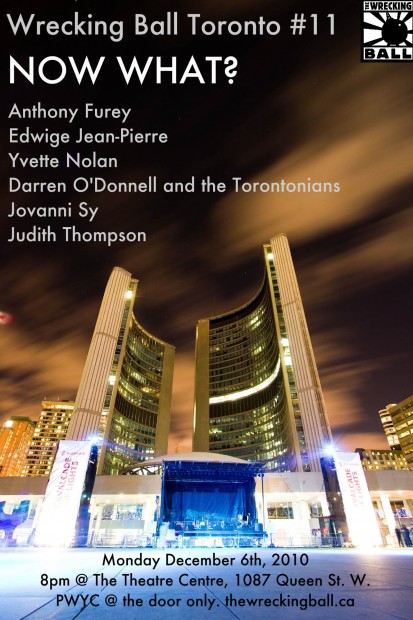 Toronto’s Elite and Artsy types take the gloves off for one last rock’em sock’em night before handing over power to the Lunch Pail type millionaires who know how to get the job done.

Voters are “sick of the elites and artsy people,” running politics.
Don Cherry – Dec 3 2010 in The Toronto Star

On Tuesday December 7 2010, Rob Ford has asked Don Cherry to place the Mayor’s Chain of Office around his neck ushering in an era of unprecedented prosperity where streetcar tracks will morph into subway tunnels, services will increase while taxes decrease, and bicyclists have been warned that it’s they’re own fault if they get hit in the numbers on city streets. The war on the car is over!

Resigned to enduring three full periods of respect for taxpayers bereft of visor-wearing left-wing bleeding heart pinkos, Wrecking Ball 11 on Monday December 6 will be the final opportunity for artsy elites to dig down deep and give it 110%  along the boards.

Come join the Wrecking Ball as we ride the gravy train one last time into the sunset (partially obscured by a Tim Horton’s drive-thru).

Read the 6 teams of actors, directors and writers had one week to prepare 6 new works ripped from the headlines on thewreckingball.ca

Read previews in NOW Magazine and The National Post 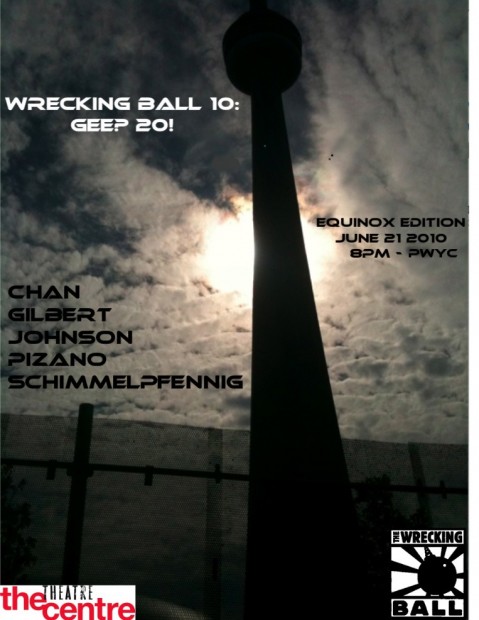 Click here to learn who will be directing and performing in Wrecking Ball 10: Gee? 20! 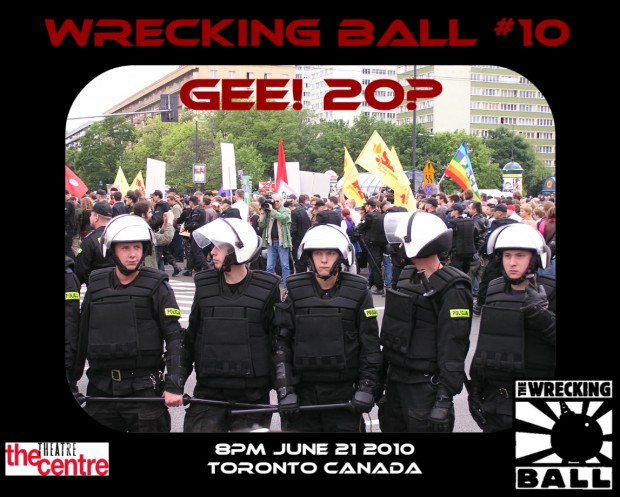 Wrecking Ball #10 is on its way, and with works by artists Marjorie Chan, Melody Johnson, Bea Pizano, Schuyler (Sky) Gilbert & Roland Schimmelpfennig, you really want to be there.  Click here for more information.