Eat The Street: Is it theatre? 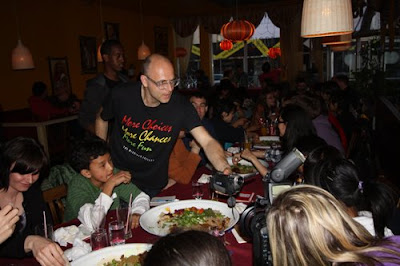 A lot has been written about Darren O’Donnell. You can find him on the cover of Eye Weekly, a comprehensive article in Taste T.O., and even The Toronto Star. Just the mention of his name can incite debate about the value and purpose of his work, or the obsessive love of twenty-something women.

Can Darren O’Donnell and his company, Mammalian Diving Reflex’s newest work with children be considered theatre? Do his theories of Social Acupuncture and his attempt to break down our boundaries and force social encounters have a place in the Toronto theatre community?

Parkdale Public School vs. Queen Street West 2: Eat The Street is Mammalian Diving Reflex’s newest project, where a group of students from Parkdale reviewed eleven restaurants in the Queen Street West area. It all culminated in the awards ceremony at the Gladstone Hotel on May 11th.

I had been to one of the dinners, at Addis Abba, an Ethiopian restaurant where we all shared platters of food and sat at a long table, mingling youth and adults. This involved being watched by the other diners in the restaurant, many sitting atop a higher platform peering down at us. Everyone of us at the table were “the players” – the flash of the camera every few seconds, the video in our faces asking us what we think, the audience witnessing an impromptu celebration of sorts. It was a collective experience, viewed by others, documented extensively and influenced by who was in the room.

Sitting in the back room of the Gladstone Hotel, it all seemed so anti-climactic. We are out of the public eye, in a room that looks a lot like any other small awards ceremony I’ve been to. Not what I had expected.

The Parkdale Pumas enter through the middle of the audience to the stage after a quiet thank you to all the sponsors by Artistic Producer Natalie De Vito, Darren O’Donnell and three of the students act as MC’s for the night. Darren talks about his lucky red socks before announcing the first award for Hottest Waiters is awarded to the Drake Hotel, who went on to win Best Overall Restaurant. They proceed to award Scariest Bathroom: Mitzi’s Sister because of the red light, Least Graffiti in the Washroom: Saigon Flower (causing the  little lady owner to look like she might cry with happiness onstage accepting it), and Coolest Chef: Matthew Matheson at Oddfellows because of his many tattoos. You can find full results on the Eat the Street Blog .

There were two dance breaks, by a brother and sister, doing traditional Indian dancing. There were images of the hottest waiters; video of the coolest chef showing off the many tattoos covering his body; O’Donnell attempting discussions onstage with the youth presenting the awards and them responding with awkward one-word answers. There was mention of some of the people in the room who were regulars to the dinners and supportive journalists. Some restaurants showed to accept their awards, some didn’t.

Darren O’Donnell’s past works with children, include the internationally touring Haircuts by Children, where youth were taught to cut hair, then gave out free haircuts to willing adults, and the Children’s Choice Awards, allowing children to experience art, theatre, dance, etc and give awards to their choice of categories. Both events share similarities to Eat The Street in their reliance on spectacle and media. 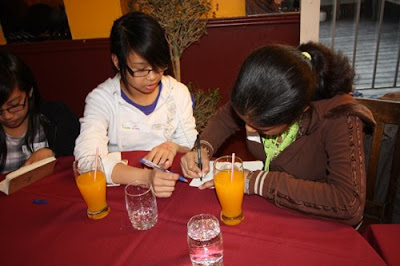 But the awards ceremony for Eat the Street was less about the spectacle and more about celebrating the people in the room, what is around them every day, their diversity and ultimately, their similarities. This was more community focused than a theatrical act and everyone present seemed somehow connected to the project.

Frankly, I was slightly disappointed. I wanted the drama, spectacle and grandeur. But I suppose that isn’t what Mammalian Diving Reflex’s Social Acupuncture wing of their company is about. According to their website, they “bridge gaps between people who may not ordinarily have any reason to form relationships. Simultaneous to its impact in the community, it functions as a laboratory of sorts for the performance work of the company, inspiring new techniques and approaches.”

This is the answer. The Eat the Street Awards Ceremony might have been more about a community coming together to share and less about theatre. But it still has theatrical elements and inspires future theatrical production. And it has taught me more about the community of Parkdale that I live in, the people around me, the children that run by me, the families that have recently immigrated here, the restaurants and ultimately about myself and how I fit into that.

Maybe if more theatre in Toronto had that impact on the audience – involved and taught the community – instead of rerunning the same past successful productions over and over again, theatre would hold a more important and impacting place in general society.