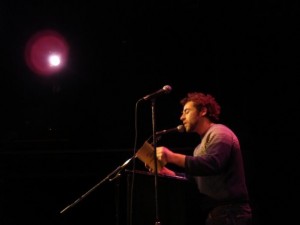 1
Last year the Festival got a lot of press with some controversial YouTube videos you produced. Is that the strategy this time round?

The strategy is to be provocative and playful. The controversy last year was great, as it attracted a lot of people to the blog, and started a really compelling debate. The intent, however, was not to be controversial, but to be playful and provocative. I’m a big believer in provocation… I like taking questions I have and turning them on their ass a bit. This theatre community needs to be braver. We’re all much too precious, in my opinon. We take ourselves VERY seriously, and attach a certain preciousness to what we are doing that is often standing in the way of creating an HONEST dialogue about real things. There is too much bullshit, if you ask me. Too much talking AROUND issues. If we want people to actually give a shit about theatre, we have to start making work that people actually give a shit about. That doesn’t happen often enough. We spend too much time trying to please each other, than ask each other to have legitimate thoughts and feelings about things. We’re too afraid of being disliked–as if being LIKED should ever be the goal. How about making something INTERESTING?

2
This year your first video about a “Typical Canadian Play” pokes fun in particular at art councils for supporting queer and First Nations oriented material. Was there any intention to tie this message to the critique you made of the Dora jury system on the Globe and Mail website the day after Agokwe swept the Doras?

The intent was not to poke fun at art councils, but to poke fun at Canada. Its no secret that we, in Canada, put a lot of effort into supporting ideas of diversity. You may have interpreted the video as poking fun at Arts Councils, but really, the joke was about a white man trying to appropriate as many cultures as possible to try and get some money from an arts council. Personally, I happen to think its very important that there is support and continued development of voices from as many cultures as possible. I don’t happen to think we do a very good job at it, mostly because we’re too afraid of NOT supporting diverse cultures, that we often throw money to anything resembling diversity. And so, I happen to think the idea of using diversity as a ploy to get arts council money is very funny. I’m not blaming anyone in particular… I’m just interested in trying to get conversations that we’re not having, going. Anand Rajaram has written a really great piece about this in our upcoming issue of WORKS.

My critique of the Dora Jury system had nothing to do with First Nations culture, and everything to do with mediocrity. Kelly Nestruck questioned why Agokwe got as many nominations as it had despite his belief that it was mediocre. And so I explained how, often, mediocre work will get a lot of attention at the Doras because of the specific points sytem the doras use. I think it is flawed, and I also think there should be more than 10 jurors, and I think there should be criteria for the jurors. If we ever want to take the Doras seriously, there should be a lot more thought put into how decisions are being made. I understand, though, that this is difficult given that Jurors are donating their time.

Also, my critique was prior to Agokwe sweeping the doras, not the day after.

3
What’s up with the small animal theme to the SummerWorks brand?

They are Toronto’s downtown animals — squirrels, racoons, pigeons and skunks. They are often given a bad rap, and so we thought it would be nice to throw some love their way. We’ve also given them sashes, turning them into a sort of beauty pageant contestants. The irony makes me happy. The design is also pretty. I think they’re all kind of cute. A re-contextualization of “pests”.

4
Canadian Actors’ Equity Association is working on a new agreement they say will be more responsive to membership taking place in festival like SummerWorks. Have they contacted you for any feedback or input? Have you heard about them asking anyone for input? What would you like to see in it?

No, CAEA only gets in touch with us when they want to make sure we are not breaking any rules. I would love it if they asked for our input. I would also love to see CAEA having a universal agreement that would let people produce their work under any name, despite their history, at the festival, without having to jump through hoops. To be honest, though, I’ve never really had a problem with equity when I was producing at SummerWorks in the past … when writing to Equity they didn’t really offer me any answers except for that individual companies should be contacting equity themselves.

5
Going into your second full year as Artistic Producer of SummerWorks, what is the one thing you wish wasn’t part of your job description?

Having to be both the Artistic Director and General Manager, with not enough money for myself or my staff.

It has a great website here.  And a cool blog here.