Economist, journalist, Demos senior fellow and former investment banker Nomi Prins thinks that Obama’s new plan is not such a sweeping overhaul of the financial system, after all. She is the author of the forthcoming book It Takes a Pillage: Behind the Bailouts, Bonuses, and Backroom Deals from Washington to Wall Street. Her latest article is an assessment of Obama’s reform proposals. It’s called “Obama’s New Economic Plan: The Good, the Bad and the Weak.”

It was just published in Mother Jones. She joins us here in our firehouse studio.

Before you comment on the whole plan that was laid out, this latest news. You used to work at Bear Stearns, and you worked at Goldman Sachs. Goldman Sachs has just said that their staff can look forward to the biggest bonus bailouts in the firm’s 140-year history. How is this possible?

It is possible because our government has chosen to effectively give Goldman the money to do that, in a number of different ways. One is the $10 billion that it got through the TARP program, which both Goldman and the government want us to believe is the only bit of federal subsidy it has gotten, which is why, when it said it would pay back the TARP program, it was all this gesture of “we’re healthy, we’re good, we’re paying it back, we didn’t really need it,” but really they didn’t want government oversight attached to it, not that there was a lot.

The bigger amount of money that has gone to Goldman has come through $12.9 billion from the AIG bailout that went straight to Goldman, its biggest counterparty; $28 billion worth of FDIC-backed guaranteed debt, meaning the FDIC put up a program last fall, and it said, “For banks that deal with consumers”—not banks that deal with multibillion-dollar companies or investors, but people—“we will provide guarantees for debt,” which means that those companies can raise debt to help consumers cheaply. Goldman said, “Alright, fine, we’ll take some of that.”

And they took $28 billion worth of that, and they have up to $35 billion that they can take under the FDIC program that was never meant for a company like Goldman Sachs.

In addition, there is a ton of money, there are trillions of dollars at the Fed, not all of that went to Goldman, but that has secretly gone to a number of banks in the system, of which Goldman is one, for which the Fed refuses to disclose any information or any detail, which also goes into this. So when Goldman says—has the nerve to say, feels entitled to say—that it’s going to pay its bankers record bonuses after the travesty that it and other banks have created in the markets, it is on the back of federal subsidies that effectively come from our pockets.

Well, I think you’ve made the point that the $780 billion-odd TARP money is only a small portion, that the actual federal support for the banking industry is about $13 trillion?

That’s exactly right. The media has constantly focused, and Wall Street has been very happy about this focus, on this measly—and I say “measly”—$700 billion worth of TARP money that Congress allowed to be allocated last October. And that money has gone out to a number of banks, including Goldman and JPMorgan and Bank of America, Citigroup and other banks.

But in addition to that, there have been over two-and-a-half trillion dollars’ worth of guarantees and other types of subsidies from the Treasury Department; over seven-and-a-half trillion from the Federal Reserve, which a lot has gone through the bank at—the New York Federal Reserve during the Tim Geithner period, when he was running it, as well as the Federal Reserve component in Washington; and then all these extra FDIC guarantees, which have the backing of the Fed and the Treasury Department.

So we’re talking about almost 13.6, actually, now—the count keeps going up every time I look at it—trillion dollars’ worth of subsidization of the banking industry. $700 billion is a part—it’s a big part, but there are so many more trillions, that just do not get the right coverage and the right perspective from the media, that exists, that are secret. Some are not. But it’s a lot, a lot of money. It could basically pay for every single mortgage in this country and healthcare and subsidizing student loans. So when it wants to, the government can come up with a way to subsidize what it wants to subsidize. It chose to subsidize the banking industry. 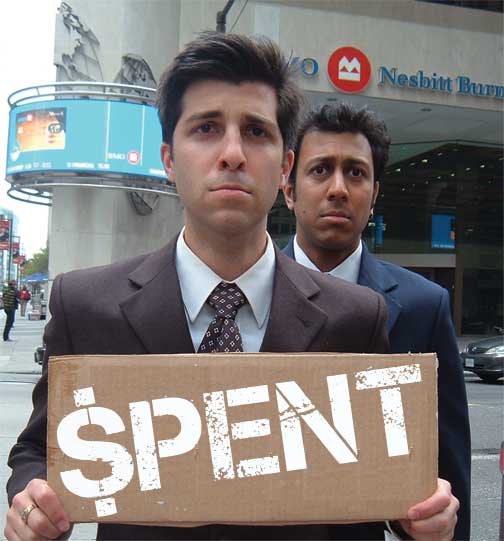 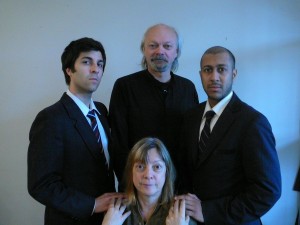 Ravi Jain is Artistic Director Why Not Theatre, the Urjo Kareda Resident at The Tarragon Theatre, and is an Artist in Residence at The Theatre Centre.

He stars in SPENT opening Friday October 8th at the Factory Studio Theatre, presented by Theatre Smith Gilmour in collaboration with Theatre Run and Why Not Theatre .