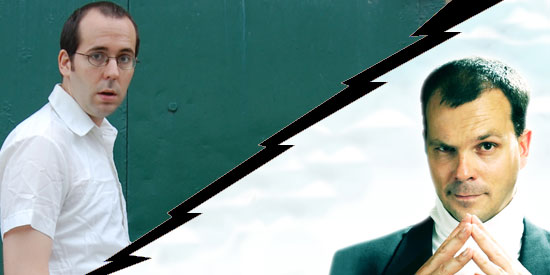 To Justin: As a British person with a French name, do you find that Canadians have expectations of you? Do you meet those expectations?

Here in Canada people often expect me to be able to speak french because of my name – an expectation i never maintain past “Bonjour. Je m’appelle Justin Sage-Passant……parlez vous anglais?”

In England the expectation is that I’m really posh and went to a private school. An expectation i’ve never met. The whole reason I have the name I have is all due to the murky past of my Grandmother and the stubbornness of my Father to not get along with his step dad.

People assume that I will care about football, or “soccer”, as I believe it’s called, that I will be pro-royal family, and that I will not be able to light a fire or do any kind of practical work. They also assume that I know about theatre, grammar and history.

To Justin: ‘Quite Frankly’ is the story of a man whose life is a constant struggle to overcome people’s low opinions about him. I have a high opinion of you. Am I wrong?

To Justin: You worked in a four man group, then a three-man – then two, and now you do one-man shows. What’s next?

We (the original four founders of Screwed & Clued) always said that we would reform to tour our first fringe show from 1998 (Shooting Up Shakespeare) across the Canadian fringe circuit again – but this time on motorbikes with sidecars. However, four young, single lads are now four thirty somethings with, collectively, four small children, 3 partners, one dog and two cats. Perhaps we should do a stage version of the Adams Family?

To Chris: I’ve heard someone comment that your show at Next Stage is your most personal one. Does this mean we get to see the real Chris Gibbs on stage?

It’s as close to it as any show I’ve ever done, except when I was playing David Suzuki in An Inconvenient Musical. That was the real me.

To Justin: What advice would you give to a British actor wanting to get work in Toronto; someone who has a history of performing one-man shows in the fringe festivals but is as yet not constantly employed in high-paying work that he doesn’t have to write himself. If there was anyone like that?

This sounds like an incredibly unlikely scenario. Should such a person exist my advice would be to create moments in their self written shows that showcase all their abilities to the Toronto-theatre-community – like being able to do back flips……or doing a convincing Canadian accent.

To Chris: As a British born comedian who now resides in Canada I would value your opinion on…Who’s funnier – Shakespeare or Shatner?

Aaaaah, the eternal question. But based on the mistaken assumption that they are two different people. Let’s be honest, TJ Hooker was obviously based on Richard the Third. He just put the hump on the front.

To Both: Is one actually the loneliest number?

J: Yes – although I’ve heard it said that in theatre less is often more.

C: Yes. Especially if that one is in the audience.

To Both: I say Fringe Festival. You say…

Justin Sage-Passant is the writer and performer of Quite Frankly.

Both shows are currently playing at The Next Stage Festival, currently running at The Factory Theatre. Click the picture below to learn all about the festival, showtimes, and all other relevant info.

Filed under The Next Stage Theatre Festival.