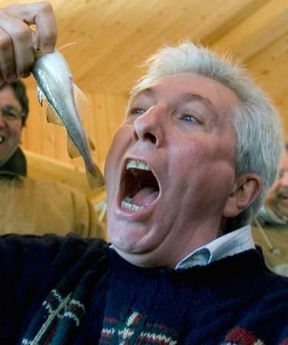 We asked Kelly Nestruck if he would provide a picture of himself - he said he would prefer to be represented by this picture of Gilles Duceppe eating a whole fish.

Torontonians like to think the role of a theatre critic is to hand out stars and write the occasional preview puff piece  – try telling that to Globe and Mail critic Kelly Nestruck.

The Windy City is blowing Toronto away

There is a spectre haunting Toronto – the spectre of a World Class Performing Arts City. All three levels of government have entered into a holy alliance to exorcise this spectre: through funding Toronto arts municipally less per-capita than any major North American city, through inside deals made by provincial government mandarins, and federal prizes created through the use of falsified documents.

Kelly Nestruck’s latest piece in The Globe and Mail can be read as a critique on all of these decisions and a simultaneous wake up call to the city’s cultural leaders that it is an outdated notion that Toronto is “on top of the world” as far as the performing arts are concerned. The argument is presented through a comparison of how Toronto and Chicago stack up against each other in four the four Cs: Civic leadership, Collegiality, Comprehensive Criticism, and Confidence.

In each instance Chicago comes out on top – for the most part because the Chicago community actually views themselves as, and operates as, a community.  They understand fundamentally that all parts of the performing arts are part of an ecosystem – from the recent theatre school grads putting up a storefront show to a Broadway-bound musical. As such, Chicago has become not just a stepping-stone to greater success in NYC, but a place TO BE a world-leading theatre artist or patron. Period. If a show transfers to New York – great for the producers – but the city continues to be a great town for theatre regardless.

Embedded in the article are a number of suggestions I fear will be lost in the simplistic debate about “Which city is better?” so I list them below. Perhaps we will revisit them in several years time to see if any progress has been made in the revitalization of Toronto’s performing arts:

Where Nestruck goes astray in his analysis is neglecting to mention the serious ethos of collegiality that still exists amongst the emerging artists in Toronto’s theatre scene despite all these obstacles. I am constantly blown away by the mutual support and willingness to help each other that exists in my generation of artists and I actually think it is our greatest strength moving forwards. Likewise, citing TAPA as ineffective seems particularly egregious as it has 23 active committees all formed by volunteer members from the performing arts community, was the birthplace of The Indie Caucus, distributes a bi-monthly theatre guide throughout the city, runs The Doras, TO Tix, and a variety of programs that make the performing arts more accessible to youth and at-risk communities. I mean, what else do you want from an arts service organization?

On Sunday evening, The Canadian Theatre Critics of Canada hosted a panel discussion with The Tarragon Theatre titled, Reviewing on the Internet: The Rebirth of Theatre Criticism? Because I was watching the Superbowl (in Vancouver) I can’t tell you what happened there, but I can tell you this: The internet made Kelly Nestruck the theatre critic for Canada’s most influential newspaper through his online work for Torontoist, The National Post and The Guardian. And now we’re having this conversation here and in The Globe and Mail – so I’m going to go ahead and give that rhetorical question a “yes”. And the reason it’s different now is we’re talking about what is actually going on, what needs to be done to make it better, and not a fictional reality that serves established old-guard interests.