The Thief and the Cobbler was conceived by Canadian animator Richard Williams, who worked 26 years on the project.

“[Williams is] an incredible animator, though. Incredible. One of the biggest problems we had was trying our desperate best, where we had brand new footage, to come up to the level of quality that he had set.”

The first time that the Miramax version of the film appeared on DVD, was in Canada in 2001 as a giveaway promotion in packages of Kellogg’s Froot Loops cereal. 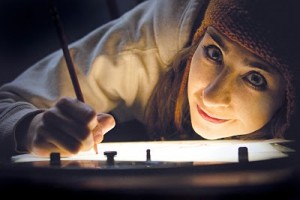 Amy Zuch is the solo performer and writer behind “Key to Key.” A regular improviser at the Bad Dog Theatre, Amy has also appeared on stand up comedy stages across the city, in musical theatre productions, and in the Toronto Sketch Comedy Festival.

Amy Zuch’s Key to Key, the true story of an animator pulled from fantasy and dropped into the real world, opens at the Toronto Fringe Festival on July 2nd at the air conditioned Royal St. George Auditorium, 120 Howland Avenue (North of Bloor).  More information available here on Facebook, and buy advance tickets here.