Why Stephen Harper Will Continue to Attack the Arts 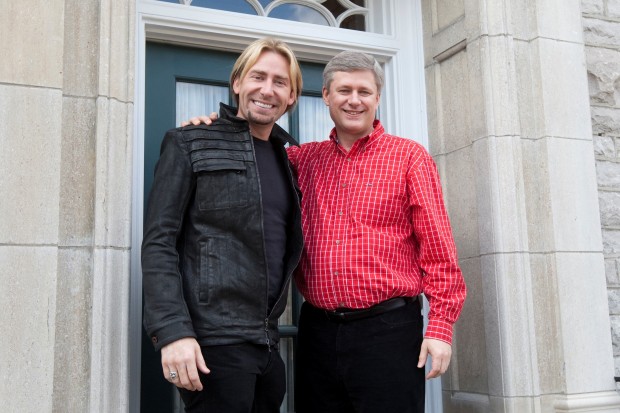 Someone forgot to tell the PM that encouraging Nickelback actually reduces Canadian culture...or did they?

Shortly after the 2008 Federal election, Peter Donolo, soon-to-be Chief of Staff to Liberal leader Michael Ignatieff, addressed a select group of executive directors and organizational leaders at an industry seminar organized by The Arts Advocate. In his role as pollster for The Globe and Mail during the election, Donolo had accumulated extensive data on the arts and how it had impacted the race. One piece of information from his presentation produced audible exhalations and dismayed nodding of heads:

The highest polling numbers the Harper campaign ever saw in the province of Ontario were on the day after his Ordinary People Don’t Care About The Arts statement (Sept 24/08).

However much it seems retrospectively the comments were a careless slip that may have cost the government a majority, the reality is there was an emotional resonance to this message that initially gave him momentum in a battleground province. Eventually, these numbers receded in the weeks before voters went to the polls, leaving the merged Canadian Alliance and PC parties short of a majority government with the support of just over one third of the electorate.

Seen in this context, comments made by the PM to the national media that he was “concerned” by Catherine Frid’s play Homegrown at the 2010 Summerworks Festival begin to fit into the government’s larger agenda as a strategic exercise by a government no longer able to communicate through rational discourse.  These comments point to a desire to use emotionally charged signposts to frame discussions and talking points, rather than the merits of programs and policies based on data or logic.

Will we talk about the arts next election in relation to harnessing our imaginations and creativity within a complex and multidimensional culture? Or will we discuss the arts in relation to whether we should use tax dollars to support terrorism? These are the types of paradigms that are being established in the discourse leading up to the next election.

If Harper succeeds in connecting arts funding and supporting terrorism, it will fit in well with a campaign that paints public funding for political parties to replace the influence of massive donations by corporations and unions as supporting separatism, a coalition government as advocating socialism, and an inquiry into the largest series of civil rights violations in Canadian history at G20 as supporting anarchism.

Of course none of these references are true, but it doesn’t matter. Every mainstream reviewer who saw Homegrown went out of their way to specifically address the allegations by the PM and his office that the play “glorified terrorism”. Each one reached the identical explicit conclusion that the play in no way justified or supported terrorism. What matters is that arts funding and taking a “sympathetic” view of terrorism are now a cultural meme that some people will remember. Mission accomplished.

This type of highly emotional and dramatic hyperbole will be backed up by an impressive war chest accumulated by the Conservative Party that has been significantly out-fundraising the opposition since fall 2008. In the lead up to the next election, this will back a multi-million dollar wave of negative ads in every media geared at emotional flashpoints in an effort to define complex policy issues with simple narratives that elicit a kneejerk response from sub-cortical “reptilian” elements of the brain.

By hoping to communicate with voters through fight or flight stimuli, the goal is to avoid any rational or substantive debate. Next year, without any reliable or detailed information available through the census, there will be even less data available to evaluate and discuss policies and programs. The heavily partisan bent of the Harper government has forced it to abdicate a knowledge-based discussion of their policies, save a few economic statistics that neglect to mention the sizeable budget surplus Canada had when they took the reins of government and the huge deficit they have generated five years later. 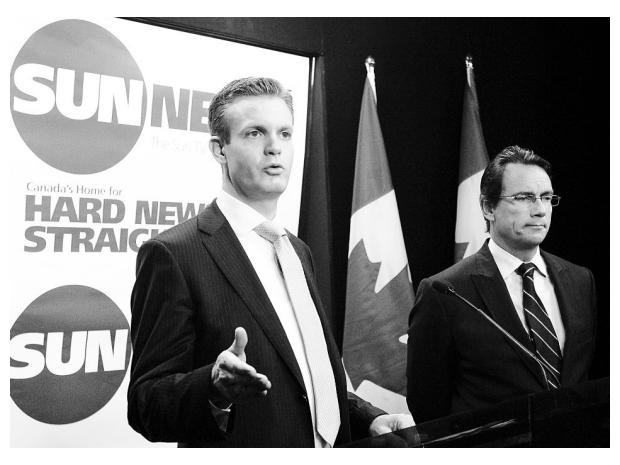 When Kory Teneycke (l) was Communications Director to the PM they both lunched in NYC with Fox News President Rupert Murdoch. Four months later he left his position to lead Quebecor Media's attempt to rewrite CRTC rules in their favour to start Fox News North, which he is pictured announcing.

This embrace by Conservative strategists of US Tea Party-style political tactics is set to be joined by the biggest weapon in regressive populist media: Our very own Fox News. Upset that the current CRTC head won’t fast track a special Category 1 licence for a national TV station to be run by Harper’s previous spokesperson, Harper is set to replace him with someone who is willing to break CRTC rules to allow him a national TV station dedicated to supporting and propagating his ideology.

Who owns the station “applying” for this licence? You guessed it: SUN Media. The very same SUN Media that created the Homegrown controversy in their Toronto newspaper and scandalously asked Harper about the play with one of only two English language questions available to the media in Harper’s first comments to the country in over a month. It has since been revealed that virtually every other journalist in attendance had already agreed to ask him about the census. (What the entire national media didn’t think Canadians from coast-to-coast were dying to hear the PMs thoughts on a summer indie theatre festival?)

There is an unfortunate logic to politics that right-wing parties are succeeding when they are talking about the military and the economy, and failing when they talk about things like education, healthcare and culture. By framing culture as a “spending” and  “national security” issue they are effectively taking a topic that is a loser for them and turning it into a winner. Combine that with the strong numbers in Ontario after Harper’s anti-arts statements in 2008 and the fact the Conservatives have given up completely in Quebec, and we may be looking at another election where arts and culture is again under attack.

This is not necessarily a great strategy for Harper – where last election arts and culture supporters were caught off guard being attacked by their own government, this election they will be organized, have lists of active supporters in every major city, and have identified leaders and organizing strategies that target swing ridings. They are also way better than them at gaining earned media and using the internet. At the end of the day, it will be up to the opposition, the non-Quebecor owned press, and civil society to shift the debate out of the highly emotional, into factual analysis of the policies and parties that will best serve the country.

Lately, it has been the subject of some media as to whether an emotional, ideologically-based discussion of policies and programs can become a substitute for rational debate that includes data and information.

« Toronto Mayoral Arts Debate @ The AGO
Leacock Live: The inside story »