Less than one month into his tenure in as the new ‘Arts Czar’, a position just created by Mayor Ford, Jeff Melanson has taken to the comments of the Torontoist website to launch a critique of their year-end post about Nuit Blanche: 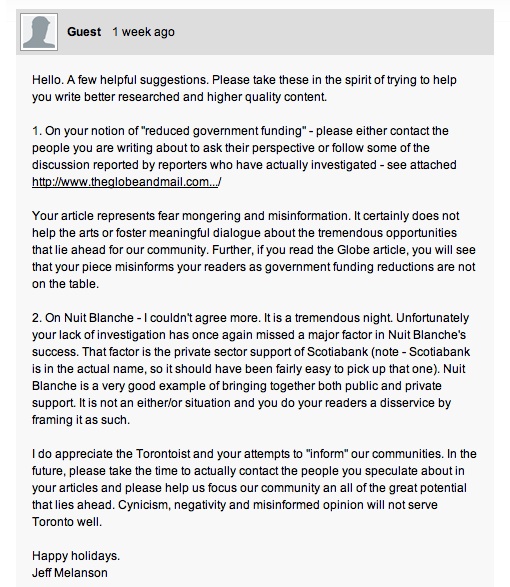 To summarize, the substance of Melanson’s comment comes down to three points that he makes related to the Torontoist post: 1) That arts funding will not be reduced under Rob Ford as Mayor; 2) Nuit Blanche is supported by Scotiabank and thus is especially not under threat as a corporate sponsored activity; 3) Any critical take on the arts in Toronto is misinformed and in fact anti-Toronto.

1) “government funding reductions are not on the table”

The only guarantee we have that Ford won’t cut the arts in a couple of years once he’s weakened key allies first is that Melanson will quit his non-paying, just-invented, part-time job if he tries. This isn’t a guarantee – it’s somewhere in between a red herring and an afterthought. I learned this was the deal, because I read the overwhelmingly positive, ‘Star is Born’ kind of interview with Melanson in The Globe and Mail that he provides as an example of laudable research and analysis. Just to clarify: articles that promote Melanson’s approach = good journalism; articles that critique it = bad journalism.

More significant is that Melanson already has a documented history of pulling a fast one on the Toronto arts community while technically appearing to increase arts funding: In early 2009, The Canada Prizes fiasco was caused by an incredible breakdown in the democratic process when the late David Pecault went over the head of Heritage Minister James Moore to convince Finance Minister Jim Flaherty to approve the only new cultural spending in the 09 federal budget to fund a $25 Million Nobel Prize of The Arts to be awarded annually in Toronto, a fact confirmed just last week by The Toronto Star’s Martin Knelman.

Eventually, it was revealed that the flimsy document used to propose the project had the names of a number of people and organizations that didn’t actually support it, and it was shelved due to this blatant misrepresentation of industry support and the backlash against what was generally agreed was a terrible idea across the country. Jeff Melanson is listed on this controversial document as one of the four key founders of The Canada Prizes, an initiative that would have massively increased “arts funding” in Toronto with 0% going to Toronto culture or artists, while cash, profile and prizes were awarded to artists from around the world. Two years later, scant details on this program have been announced by Canadian Heritage other than it will now be administered by The Canada Council.

Personally, I believe it’s quite probable “arts funding” as a broad topic will actually go up under Melanson. The real question is how and what will be funded. More eight-year-olds in tutus at The National Ballet, or across the city, are probably something Rob Ford can live with. Is now a good time to bring up the play about G20 I have been thinking about? Okay, maybe not. What if it was a commercial hit?

2) “Unfortunately your lack of investigation has once again missed a major factor in Nuit Blanche’s success. That factor is the private sector support of Scotiabank (note – Scotiabank is in the actual name, so it should have been fairly easy to pick up that one). Nuit Blanche is a very good example of bringing together both public and private support.”

The crazy thing about this one is that it is written right in the Torontoist article: “Since Nuit Blanche is already mostly a privately funded event—thanks, Scotiabank—it’ll probably continue regardless of Ford’s slash-and-burn efforts” prompting one commenter to write, “Did you even read the post Jeff?” What this tells us more than anything is that Melanson probably didn’t read the post more than once before deciding to respond in a huff. If he did, he would have realized that he spent half of his time refuting a point that was never made. It also makes his parenthetical ‘dig’ at the author’s “lack of investigation”, possibly worthy of an apology. Do Arts Czars have to apologize when they’re wrong?

This could be what Melanson would view as being “entrepreneurial”: selling the right to change the “actual” names of public events to corporations. It is an interesting debate, but certainly not one where there is a lot of consensus, with at least one prominent city hall activist calling for Torontonians to refer to the event as BMO Nuit Blanche in any of their social media communication about the event.

3) “I do appreciate the Torontoist and your attempts to “inform” our communities. … Cynicism, negativity and misinformed opinion will not serve Toronto well”

I’m confused why it’s not obvious when you use quotes around words like “inform”, people know that you don’t really mean it. It’s like showing that your fingers are crossed while fibbing.

As for the demand for a positive response – if one thing’s for sure when you’re Rob Ford’s Arts Czar – it’s that Haters Gonna Hate. Even if after this inauspicious start, he does an incredible job, there will still be someone in the blogosphere with an axe to grind. This is a position that is going to require thicker skin. People say untrue things on the internet all the time – how do you think Rob Ford ended up Mayor?

Since this disastrous posting, Melanson has arranged a second, ‘Star is Born’ interview, this time with The Toronto Star’s Richard Ouzounian that fails to address the Torontoist posting or The Canada Prizes, but does make him seem like the next Justin Bieber.  This was presumably to do some damage control on the whole situation, and also add a little clarity regarding his priorities and mandate.

Melanson has some good ideas, especially about homegrown hits and the importance of increased diversity.  Clearly his arts education ideas borrow heavily from the gospel Simon Brault has been spreading. Brault has been pushing a national Participaction type program for the arts, which makes sense since Brault is CEO of National Theatre School and Melanson runs the business side of the National Ballet School.

Most disappointingly, he refers confusingly to Toronto Alliance for the Performing Arts (TAPA) as “an advocacy organization”. This is a statement from someone as experienced as Mr. Melanson, that can only be characterized as deliberately obtuse – certainly someone in his position knows the difference between an “arts service organization” and an “advocacy organization”.  TAPA is an “arts service organization” that provides a variety of services to performing arts organizations across the city. Occasionally it advocates on behalf of its members – as well as running workshops. TO Tix, The Doras and a number of other community-based programs.

A good example of an “advocacy organization” would be The Arts Summit, which has been successfully advocating for fourteen years for increased government funding of institutions with operating budgets of $5 million or more (like the National Ballet) while keeping the door shut to smaller organizations and independent artists. If I’m wrong here, prove me wrong: get independent artists and mid-sized organizations from across the country a place at the table when The Arts Summit comes to Toronto from April 1-3 2011.  As long as these major institutions dominate cultural policy through formal and informal networks, whether or not “arts funding” goes up or down is just window dressing to the real decisions being made behind closed doors.

Filed under Arts Czar, Canada Prizes for the Arts and Creativity.