The problem with Oleanna

The issues explored in David Mamet’s controversial play on political correctness, education, and power politics, Oleanna, stand up to the test of time.

They have as much resonance today as they did when it opened to audiences in 1992.

The only problem is, while showcasing some of Mamet’s best writing, the play is ultimately mired by his inability to transcend his own personal prejudices. 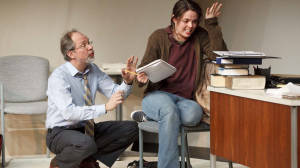 Almost twelve years after directing the show myself, I went to see Soulpepper’s remount currently playing at The Young Centre. This isn’t a review, so I won’t be commenting on the production.

What stood out to me this time around, was just how flawed a play Oleanna is.

This comes partially from a great disappointment at how well the play begins, and how badly it finishes.

The first act has the promise of brilliance. Carol, a confused and somewhat neurotic college student, appears in the office of John, her professor, looking desperately for answers.

She is failing, and she can’t understand why. John has little time for her at first, more interested in answering a phone that rings incessantly and preoccupied with the impending purchase of his dream house.

John is the archetypal verbose intellectual, who challenges all excepted norms in his academic life, while happily accepting the spoils, both power and money, the profession rains upon him.

John is a wholly actualized character. Carol is not.

He is arrogant and snobby, and yet he makes the important decision to try and reach Carol in a less than orthodox way

If we’re going to take off the Artificial Stricture, of “Teacher,” and “Student,” why should my own problems be any more a mystery than your own?

He then goes on to talk about his predictable, upper-middle class dilemmas in a typically arrogant and paternal way.

Nice house, close to the private school… (He continues making his note.) … We were talking of economic betterment (CAROL writes in her notebook.) … I was thinking of the School Tax. (He continues writing.) (To himself:) … where is it written that I have to send my child to public school. … Is it a law that I have to improve the City Schools at the expense of my own interest? And, is this not simply The White Man’s Burden? Good. And (Looks up to CAROL) … does this interest you?

But despite his great flaws, he opens up a compelling discussion on the value of post-secondary education.

We shove this book at you, we say read it. Now, you say you’ve read it? I think that you’re lying. I’ll grill you, and when I find you’ve lied, you’ll be disgraced, and your life will be ruined. It’s a sick game. Why do we do it? Does it educate? In no sense. Well, then, what is higher education? It is something-other-than-useful.

When Carol challenges John on how he can disparage education, to those who have in many cases, “over-come great obstacles to get here,” he replies that it is his job to challenge and provoke thought in his students. Carol seems unable to grasp this idea.

So whether you like him or his ideas, John is a real character, at least somewhat worthy of our empathy.

Carol is less a character than a straw woman. Mamet uses her, simply as a vehicle, to drive Oleanna towards a conclusion that confirms his suspicions: that political correctness is used by feminists, in a witch hunt, that has as its ultimate purpose the removal of humanity from human interaction.

Whether you believe this or not doesn’t matter, because Mamet makes his case so poorly.

In the first act Carol is written, rather one-dimensionally, as seemingly inarticulate, desperate, angry, and completely lacking self-esteem.

Nobody tells me anything. And I sit there … in the corner. In the back. And everybody’s talking about “this” all the time. And “concepts,” and “precepts” and, and, and, and, and, WHAT IN THE WORLD ARE YOU TALKING ABOUT? And I read your book. And they said, “Fine, go in that class.” Because you talked about responsibility to the young. I DON’T KNOW WHAT IT MEANS AND I’M FAILING… 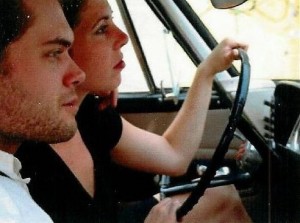 Mamet reveals nothing of where she is coming from or what her background is. If she has a life outside of being a failing student, we’re not privy to it.

Remarkably when Carol returns in the second and third act, this time on decidedly less friendly terms, she has developed great self-confidence and a sophisticated vocabulary.

… It is a sexist remark, and to overlook it is to countenance continuation of that method of thought. It’s a remark…

… What gives you the right. Yes. To speak to a woman in your private… Yes. Yes. I’m sorry. I’m sorry. You feel yourself empowered … you say so yourself. To strut. To posture. To “perform.” To “Call me in here…” Eh? You say that higher education is a joke. And treat it as such, you treat it as such. And confess to a taste to play the Patriarch in your class. To grant this. To deny that. To embrace your students.

Of course we still have no idea why Carol is doing this, or where she is coming from, only that she is single mindedly bent on John’s destruction.

I don’t care what you feel. Do you see? DO YOU SEE? You can’t do that anymore. You. Do. Not. Have. The. Power. Did you misuse it? Someone did. Are you part of that group? Yes. Yes. You Are. You’ve done these things. And to say, and to say, “Oh. Let me help you with your problem…

This is the problem with Oleanna. The questions it asks and tries to address are fascinating, and without easy answers. But Mamet tries to give us easy answers in his conclusion.

He wants us to feel that John is righteous and that Carol is a monster, and he succeeds.

But are we any wiser for it?