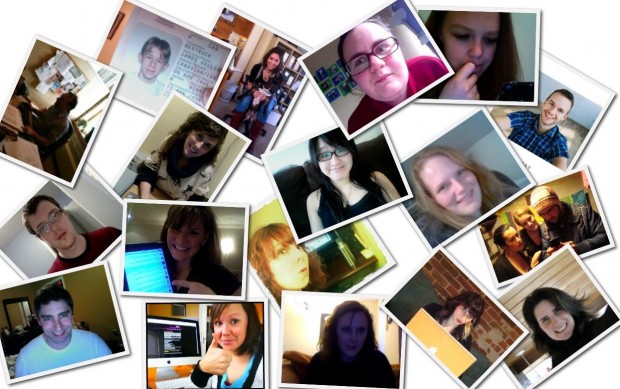 Last Friday, unbeknownst to the fine folks at Toronto’s The Only Cafe, they were host to a cross-country conversation between artists, theatre organizations and theatre lovers old and new.

The inspiration behind the Twitter chat came on March 10th, when I caught a discussion happening online about the Opening Night of Catalyst Theatre’s Production of Hunchback at Citadel Theatre in Edmonton. Catalyst and Citadel had invited the audience to “live tweet” the event, and they would be showing the tweets on a display screen with a program called Visible Tweets, as recommended by nearby Shell Theatre.  Shell has been live tweeting their shows since November, 2010 and they’ve found it to be a really effective way to get audiences excited about their events.

When I started following the assigned #yeghunchback hashtag, I caught the following tweet:

I joined the conversation, and asked @lindork what had brought her to the theatre that night, given that she was a self-confessed “theatre newbie”, and she told me it was mostly due to the number of tweets she had seen about it.

A few days later I asked @lindork (Linda Hoang), along with everyone responsible for tweeting for Catalyst, Citadel & Shell, to join me for a Twitter chat about the use of social media tools to develop new audiences, under the designated hashtag #auddev. After we spread the word about the chat, I was pleased to find we were being joined by companies and bloggers across the country, including (among many others) Montreal’s SideMart, Toronto’s Studio 180 and Crow’s Theatre, and the PuSh Festival in Vancouver.

You can catch up on the entire conversation here, with the transcript sent to me by @AudienceDevSpec‘s Shoshana Fanizza out of Boulder, Colorado, who regularly uses #auddev to keep in touch with the twitosphere about issues relating to arts organizations and audience development. I have synthesized some of the main talking points below, but I highly recommend taking a peak at the transcript just to get a better look at the enormous participation we had across Canada and in parts of the United States.

When I asked participants for their views on allowing tweeting throughout the actual performances, there were definitely some mixed responses. Some thought this would be disrespectful to the actors performing, others thought it would mean the audience would be distracted from the show if they were focused on their smart phones, while some people thought it would be interesting to experiment with the possibilities:

@canadianstage‘s suggestion of live tweeting a dress rehearsal was a popular one, and @macdonaldfest also suggested tweeting a Q&A might be a good solution for involving the audience within the theatre without disrupting the performance. @morroandjasp took up the challenge immediately and offered to include a Twitter/Audience Q&A this week. I am pleased to report that I and a number of Friday’s participants spent a lovely part of Wednesday evening in conversation with Morro and Jasp, the creative team AND their audience after their performance at Theatre Passe Muraille. It was great fun for us, and I’d love to hear what the experience was like for the audience.

Who are you tweeting for?

Many people took this chat as an opportunity to express some frustrations with Twitter and Twitter users in general. There was commiseration over accounts used only for self-promotion, or retweeting everyone else’s content without adding anything to the conversation, and a general poopooing of Facebook pages linked to Twitter feeds where one automatically updates the other. Consensus seemed to be that they speak to different audiences and therefore require a different voice or style, and that your audience wants to feel you’re actually having a conversation with them, rather then just putting forward a constant stream of information and sales strategies. Do you have linked accounts? Would you consider changing them?

We’re always trying to find out about interesting and innovative theatre companies trying new things both on and off the stage, so I asked for recommendations for companies doing great things with social media:

So I checked out Woolly Mammoth Theatre after the conversation, and I was indeed impressed. In the lead up to their presentation of Mike Daisy’s The Agony and the Ecstasy of Steve Jobs, they had staff members “reporting” from the sales lineups for the iPad2, and audience members could follow along via the hashtag #ShowUsYouriCrazy. They were also offering $0.99 tickets for one day only (the cost of the average Apple app) if you could arrive in person with a “Jobs (Apple)” Foursquare badge. Now, “Jobs (Apple)” + “Foursquare” means absolutely nothing to me, but it’s definitely the kind of thing I’d be willing to look into to see Mike Daisey for $0.99.

Well, this was a popular discussion, but yielded mostly questions and few answers. Looks like everyone’s still trying to figure this one out.

Has anyone found a solution they’d be willing to share with the group?

Amazingly, within a few hours of the conclusion of the chat, participant @SMLois had blogged about the event in a piece called On the Canadian Theatre Conversation:

Like a number of other participants in the conversation, Lois was excited by the fact that this conversation was happening at all, and is looking forward to that conversation continuing. She’s also looking for Canadian theatre blogs from outside the main centres, so if you know of any not currently listed in our blogroll, please let us know.

My Chat with Linda: 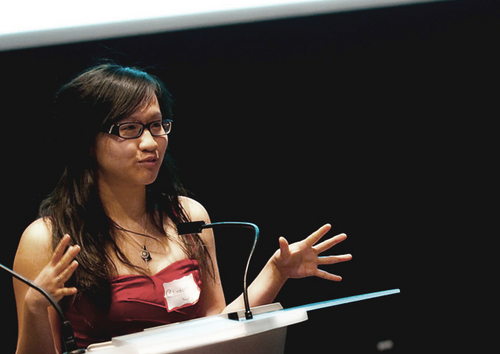 On Wednesday night I also caught up with Linda (our “theatre newbie) to ask her a little more about her experience attending theatre for the first time. She told me it was intimidating at first, but she got comfortable once she had arrived and could start interacting with the tweets she saw on the display screen. I asked for her perspective on live tweeting during a performance because I knew she had wanted to tweet during Hunchback. I wanted to know if she thought she might get distracted if she were to tweet throughout a performance: 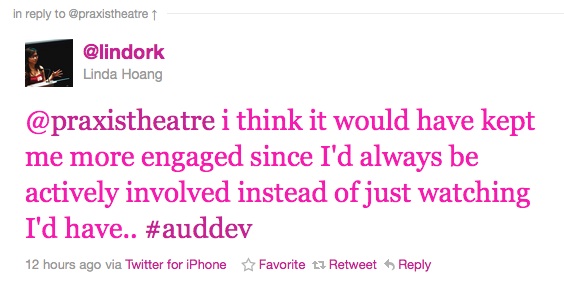 And as for her and her fellow theatre-newbie companion seeing more theatre?

Well, that’s a whole other conversation I think. Who’s in?