Midnight Madness! 40 humans in a cage 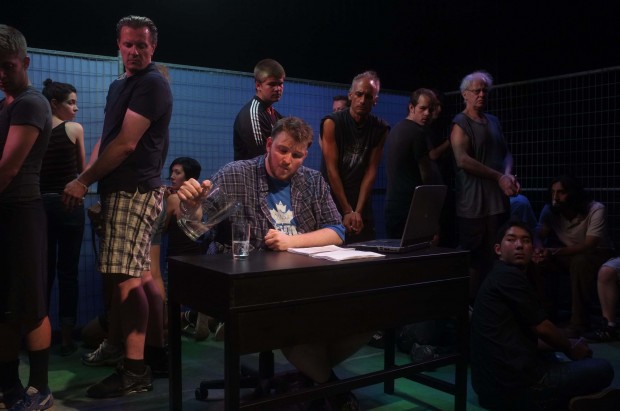 Tonight at midnight 40 people will fill the cage. Photo by Will O'Hare

Tonight at midnight we are adjusting the way we perform You Should Have Stayed Home. For one night only, the show will be presented as a slightly altered version that includes a cast of 40 instead of the regular 27.

The decision is informed by our desire to present a clear idea:

This is what 40 people crammed into a 10ft by 20ft cage, begging for water looks like. Our set is the same dimensions as the cages at The Eastern Ave. Detention Centre during G20 Toronto, and it will be full of the same number of bodies.

We don’t imagine that this will be in any way a REALISTIC portrayal of what it was like to be detained and deprived of your Charter rights that weekend, but we do think it is something theatre should try to look at.

When I trained as a director at The Tarragon Theatre under Artistic Director Richard Rose we discussed at length the notion that at the end of the day, theatre is people moving through space and time. This is the actual number of bodies, in a good approximation of the space, for about 12 minutes of our hour-long show.

There is an interesting mix of family, friends, and theatre community members joining the cast for one night to contribute to this theatrical experiment. I’m even going in the cage myself. It seems important.

Yesterday’s ruling by a Toronto judge that the police acted as aggressors against peaceful protestors at G20, shows that as a community and a democracy, demanding accountability from our institutions and law enforcement agencies is more urgent than ever. I’m not sure if a piece of theatre can achieve that, but we have decided to try.

“The only organized or collective physical aggression at that location that evening was perpetrated by police each time they advanced on demonstrators… The zealous exercise of police arrest powers in the context of political demonstrations risks distorting the necessary if delicate balance between law enforcement concerns for public safety and order, on the one hand, and individual rights and freedoms, on the other”

Filed under #G20Romp, You Should Have Stayed Home.