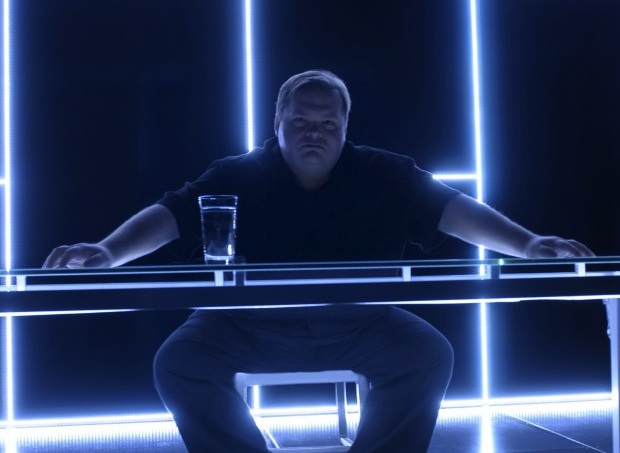 The Agony and Ecstasy of Steve Jobs: Hilarious, heartbreaking, dedicated to exposing the Means of Production in the 21st Century

by Aislinn Rose and Michael Wheeler

The Cult of Mac for including Mike Daisey’s play The Agony and the Ecstasy of Steve Jobs in its round-up of 2011 Mac stories.

Cult of Mac reports that in February of this year, bad publicity was at an all-time high surrounding the conditions and suicides at the Chinese factory Foxconn, Apple’s largest supplier. Apple Co-Founder Steve Wozniak was apparently moved to tears by the story as told by Mike Daisey when he saw the show, and urged Tim Cook, Apple’s Acting CEO to see it as well, saying “I will never be the same after seeing that show.” [Full disclosure: this list was created on two Macbooks, with some side research on one iPad, after tweeting to one another via two iPhones.]

We’re not surprised by Wozniak’s reaction to Daisey’s performance. Daisey has appeared on a number of 2011 lists across North America, and for the New York Times list of Cleverest Theatrical Moments a category was created for “most remarkable storyteller who isn’t Mike Daisey”. Daisey was a definite influence on our co-production of You Should Have Stayed Home at SummerWorks this summer, and we hope he’ll come to Toronto soon.

Richard Ouzounian for his entertaining and unabashed campaign against the new regime at Canadian Stage.

Ouzounian didn’t have much to say in favour of Canadian Stage’s 2011 productions, noting that the only shows anyone seems to be enjoying are the “imports”. He’s quick to congratulate Theatre Passe Muraille on importing Ride the Cyclone, however, hinting that perhaps it’s not WHETHER a show is imported but WHO does the importing, if you’re looking for a measure of consistency. (For more on Ouzounian’s vendetta against large-scale theatrical risk-taking, see Globe and Mail Critic J. Kelly Nestruck’s thoughts on the matter.)

Maybe they’ll open the balcony, but if they do it just to mount Shirley Valentine again who cares? 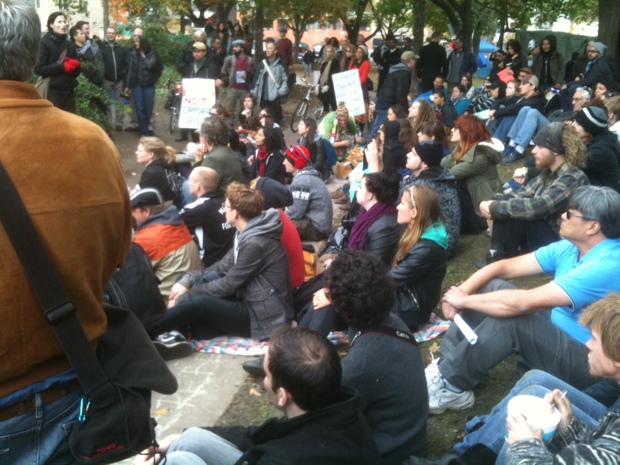 Torontoist for embracing complexity and contradictions by listing Occupy Toronto as both Hero and Villain in their year-end poll.

For progressive-minded Torontonians who think structural change is required to make our society more just, generous and inclusive, Occupy Toronto was equal parts inspiration and frustration.

HERO: “Nominated for: establishing a beachhead of resistance during an age of austerity… Occupy Toronto may have annoyed a lot of neighbours with its first volley of direct action, but in the long run that annoyance has forced a critically vital discussion about social justice into the mainstream.”

VILLAIN “Nominated for: squandering a rare opportunity… “Friday” made Rebecca Black famous; it did not make her talented… No matter what the alt-press told you, the robber barons never broke a sweat worrying about the park-dwellers.”

Josh Stearns for topping the list of Storify’s Stories of the Year.

Storify is an awesome resource that reinforces the notion of Twitter as a microblogging or even news-writing tool. Earlier this year we enjoyed Jonathan Goldsbie’s use of Storify to highlight humourous tweets collected under the #matlowmurdermystery hashtag he created after Councillor Matlow tweeted about attending a murder mystery dinner.

David Hains was another great Storifyer with his use of Storify to collect the Open Letter Councillor Wong-Tam wrote to Mayor Ford via Twitter after she had been blocked from attending a City child care meeting.

Storify used its own tool to highlight the 3 most “liked” stories of 2011, with Josh Stearns topping that list after collecting stories about journalists being arrested at various Occupy protests across the U.S. Stearns had this to say about Storify: “It really paints a whole picture, rather than just being a series of links… You get to see journalists … being tackled by police, shouting that they’re press in video they took as they’re being arrested.”

Just because we missed this multimedia show about terrorism created and presented by Kitchener/Waterloo’s MT Space at Theatre Passe Muraille doesn’t mean we can’t be excited about it topping this list. Great to see a critic unafraid to give accolades a show with reduced profile, if it is in fact the best thing he saw all year. 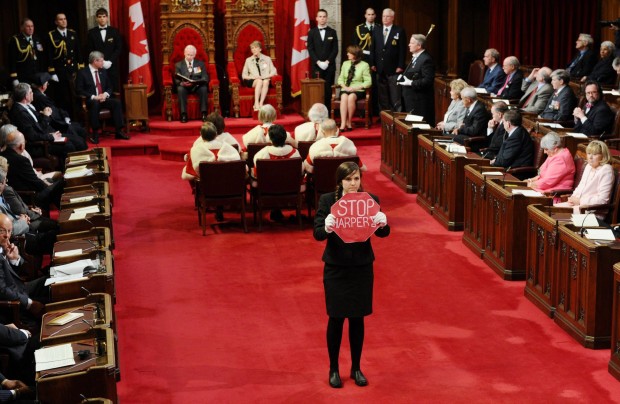 We're all used to this image now, but take a sec to imagine what it was like the moment before doing it.

Huffington Post Canada for including theatre artist Brigette DePape and her STOP Harper sign in their Top News Photos of 2011.

When a lone page on Parliament Hill walked onto the floor during the Throne Speech with the STOP Harper sign she had smuggled in under her jacket, the notion that brave and unimagined theatrical interventions would be required under a Harper Majority was cemented.

It turned out that the page, Brigette DePape, is also a theatre artist who had toured the Canadian fringe circuit with a solo show she had written about the possibility of change through activism. Here’s to theatre artists taking more chances in 2012.

J Kelly Nestruck for The Globe and Mail’s Theatre ‘Year in Review’ which reiterates the important role Summerworks plays in the theatrical ecosystem.

For continuing to point out that The SummerWorks Festival is one of the most important places for new theatrical work to emerge and that the recent decision to remove funding by Heritage Canada smacks of political interference.

Ride The Cyclone (practically every 2011 top 10 list), If We Were Birds (2011 Governor General Award) and The Middle Place (2011 Toronto Theatre Critics’ Award), are just a few of the shows that used Summerworks as a barebones way to get these important works in front of an audience. There is no credible reason based on artistic merit for this festival to have its funding pulled.

Not content to mention a mere ten favourites from 2011, Jon Kaplan and Glenn Sumi of NOW Magazine had to include a selection of “other standout shows” and “riveting revivals” along with their “top 10”. This is probably a reflection of the amount of shows this duo sees in a year, and a reflection of their commitment to covering a wide range of indie theatre.

Among their favourites and honourable mentions were several shows by indie companies big and small, including Obsidian Theatre, Studio 180, Litmus Theatre, and Convergence Theatre. (And no 2011 list is complete without mention of Atomic Vaudeville’s Ride the Cyclone from Victoria.) NOW Magazine seems to get how this new theatre ecology works.

Howard Sherman for putting together the Mother of All Theatre Top 10 Lists.

This producer, consultant and pundit used his website to compile, summarize and link to most of the major theatre-related top 10 lists for cities across North America. the English-speaking world. Tip-o-the-hat Sir. Well played. 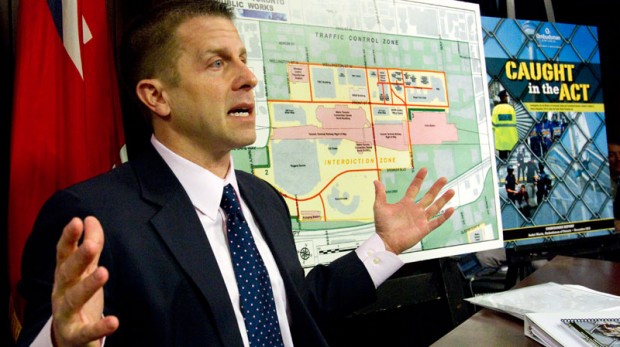 Way to go Ombudsman Marin – you are the praxistheatre.com top of the top 10s for 2011. 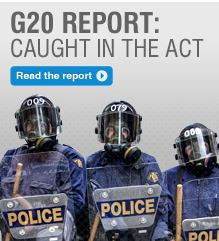 First off – flat out mad props to any provincial ombudsman who takes some of his or her time between Christmas and New Year’s to publish a Top 10 list of things their office investigated that year and promote it on their personal Twitter account.

Secondly, although he rates it #8 on his list, we think his report ‘Caught in The Act’ which widely condemns policing actions actions at The G20 Toronto Summit as “the most massive compromise of civil liberties in Canadian history” is historically and fundamentally a categorically important document for all Canadians concerned with preservation of civil rights.

« Some thoughts on shopping for Boxing Day
Variation #41: Sarah Thorpe »