Out The Window & the online Brain 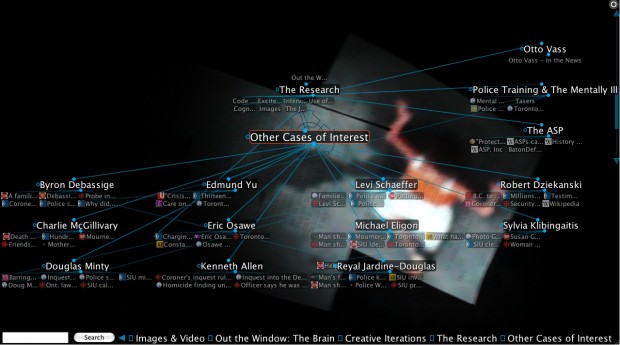 Out The Window opens one week from today.

I started working on Liza Balkan’s Out The Window in 2010 when I was invited by Chris Abraham to join a development and workshop phase with Crow’s Theatre. I was in the very early stages of examining my own project that involved court transcripts, interviews and verbatim text, so it was an ideal project for me to observe.

I had no idea at the time that I would go on to work with Liza over the next couple of years, providing dramaturgical support at first, and then creating my most complicated online project next: The Brain.

Out The Window chronicles the years Liza spent making her way through the Canadian justice system after witnessing the death of Otto Vass after an altercation with the police in 2000. The piece also examines the years after the 2006 inquest, during which Liza has conducted countless interviews with lawyers, activists, police, and members of the community. 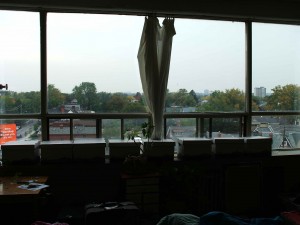 Throughout those years, Liza has accumulated several bankers boxes, hundreds of computer files, and DVDs, CDs and mini DV cassettes filled with research, testimonies, and the work created by designers, actors and other artists. As I worked with Liza, it became apparent to me that this vast amount of content needed to be archived somehow, and preferably in a way that would make it accessible to the public. Enter: The Brain.

As Artistic Producer of Praxis Theatre, I have long been interested in experimenting with methods of interacting with potential audience members in the lead-up to a show, and continuing the conversations sparked by the show’s content after the show has ended.

For Out The Window I proposed the creation of an “online brain” that would allow me to try to capture Liza’s knowledge, along with the history of the project, in an interactive tool that would provide the public with an opportunity to navigate the immense amount of information according to their own interests.

Using “PersonalBrain” mind mapping software (and its online counterpart WebBrain), I have created four main sub-sections that branch off into a myriad of different sibling and child “thoughts”. Some thoughts contain embedded photos and PDFs, while others contain links to articles and documents. The Brain is a work-in-progress with a huge amount of information still to come. For an overall flavour of what’s currently available, right-click on the background of The Brain and select Wander mode. Click anywhere on the screen to set it back to normal.

I have also created an online home for the project at www.outthewindowcollective.com, where you can read about the show, the artists involved, and take a look at an introductory post about The Brain that provides some how-to advice on navigation.

One of the other things we’ve been exploring with our work at Praxis Theatre, is how our online activities can directly impact the development of our work. I am very excited to see how the creation of The Brain has had an impact on Out The Window. With the existence of our living archive, we’ve been able to make peace with the elimination of certain sections of text or design work, knowing that these elements would go on to have a life online.

The Brain has also found its way into the design of the show itself, which may mean that I’ll actually have to add The Brain to the Creative Iterations section of The Brain.

Click here for more information on Out The Window at the Theatre Centre opening March 17th at 7pm, and check out the brain before or after the show to learn more.

Filed under Aislinn Rose, Free Fall '12, Out The Window.