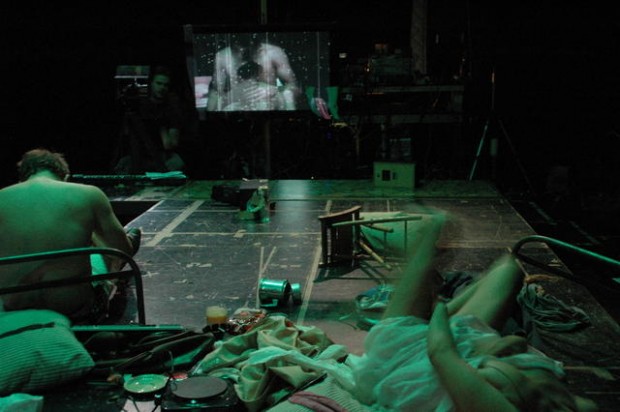 The Wooster Group image by Nancy Campbell - Click to enlarge

Among producers of experimental theatre the Wooster Group is unique for its combination of aesthetic and political radicalism with intellectual rigor.

From the beginning, its work has been tough, difficult, vigorous and controversial.  It has consistently addressed pressing social issues, including the victimization of women, racism, and the multifarious processes of dehumanization.

It has shocked and outraged a public inured to the unconventional and the daring.

It has brought into theatre material usually considered inappropriate, tasteless and illicit (including pornography, blackface and pirated text) not for sensational ends, but to explore and challenge middle-class culture, to question its assumptions and mode of operation and to reveal that which it has systematically suppressed.

It has made the New York theatre a vital arena in which social, political and cultural issues are debated.”

~ Breaking the Rules by David Savran

That description of the Wooster Group was published in 1986 and it is as true today as it was 26 years ago.

I first came in contact with the Wooster group 6 years ago when I first moved back to New York. I was keenly aware of their history and their controversial body of work. You could immediately recognize their overwhelming influence upon the independent theatre community in the city. At the ripe old age of 42 and already the co-artistic director of two successful Canadian theatre collectives(bluemouth inc. in Toronto and Radix Theatre in Vancouver) I contacted the performance garage, home to The Wooster Group and volunteered to be an intern.  Despite my assumptions about my experience and level of expertise, I agreed to get coffee and pick up mail just like all the other recent college graduates interning there. In exchange I got to sit in on the company’s rehearsals and have an opportunity to watch their creative process first hand.

Two years later I was still interning at the garage, although I arbitrarily started referring to myself as an apprentice, because it somehow made me feel more useful. What I learned was not all useful or great, but definitely inspiring. I was disappointed to discover that the company did not function as collective as I had hoped. Several of the founding members had either moved on or had passed away, and the remaining company operated in more of a traditional theatre hierarchy than I had dreamed. Elizabeth LeCompte was basically the director at the helm, and I imagine the group dynamic may have been somewhat different in the earlier days.

What I did find was a room ignited with an explosive creative energy. The playfulness and pace of creation was like nothing I had experienced before. People were contributing and cutting ideas faster than I could keep up. I barely had a grasp of one image before the group had already moved on to three or more ideas ahead of me. I was dizzied by the incredible pace and amount of material generated. I had become so precious with my own ideas that I couldn’t imagine an atmosphere where good ideas were simply the currency that allowed you to remain in the room. At the garage you could work on an idea for over 2-3 months and it would easily be disregarded in a matter of seconds. I once spent 2 solid months erasing Richard Burton’s image from a film version of Hamlet, only to have it cut in an impulse, simply because the scene was too long. Then they would be on to the next thing. Layer upon layer, ideas are generated, recycled, trashed, confabulated, appropriated, exploded, ridiculed, deconstructed and then re-contextualized.

What you get is an onslaught of ideas and provocative images like nothing you had ever experienced before. I don’t always like what I see when I go see a Wooster show. One thing is for sure; you can’t help but have a strong opinion about it. To me that is the true test of relevant art. 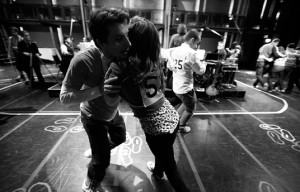 Image of Stephen by Gord Hawkins

Stephen O’Connell is one of the artistic directors of the Toronto-based interdisciplinary theatre collective bluemouth inc. The company is a former resident company at The Theatre Centre, and Stephen was also co-curator with Franco Boni of Free Fall 2010. Next up for bluemouth is the return of the immersive theatre project Dance Marathon, May 18-19 at World Stage.