As mentioned in my last post, because Senora Carrar’s Rifles is atypically Aristotelean in its structure, Brecht recommends it be shown “with a documentary film showing the events in Spain, or with a propaganda manifestation of any sort.” Doing this at the actual performances would be nigh impossible for a number of reasons.

Online is a different story though, and I hope to post some relevant info about The Spanish Civil War in a way that relates to the piece between now and when we open on September 20th. 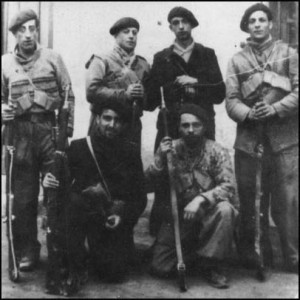 French members of the International Brigades

Early in the play, Senora Carrar’s house is passed by The International Brigades.  These were made up of volunteers from Western countries who wanted to stop the spread of Fascism in Europe and often paid their own way to join the fight against Franco. Orwell, Hemingway, and Jim Watts (the principal inspiration behind Praxis Theatre’s Jesus Chrysler) all went to Spain in the 30s to join the fight. Orwell would later write Homage To Catalonia about his experience, while Hemingway would pen For Whom The Bell Tolls.

The Canadian contingent were The Mackenzie-Papineau Battalion.  Canadians are one of the few contingents that don’t pass by the house in the play, but many other nationalities do, and each is identified by the song they are singing on the way to the front. In our production, all of the sounds are made onstage by Beau Dixon who acts as a drummer/foley artist/performer, so we took these songs and distilled them down to a few core rhythmic bars that are played on a snare drum as each brigade passes.

Due to the magic of YouTube, anyone can hear these songs now. If you have a favourite, let us know why.