A Crisis of Space: Why I Started Videofag 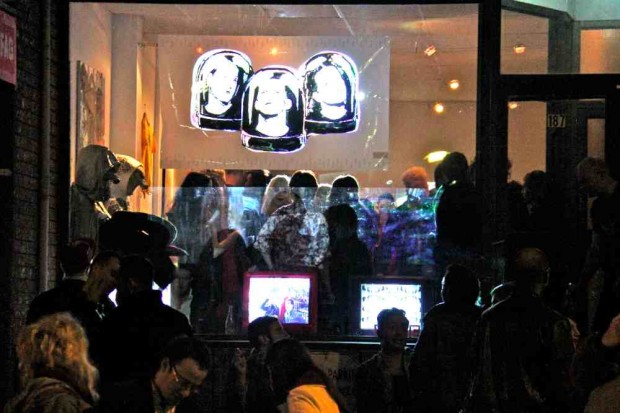 Last month my boyfriend William and I signed a one year lease on an old barbershop in Kensington Market, spent three weeks in our long johns scrubbing the walls and floors of hair, painting it, installing lights, and launched a storefront performance space called Videofag. It is our home and the first one we have shared together. But it also one we want to share with Toronto’s cultural community because we believe we can offer something vital to our peers – space. From Le Chat Noir and Gertrude Stein’s rue de Fleurus salons in Paris, to Warhol’s Factory and the Chealsea Hotel in New York City, to VideoCaberet, A Space Gallery, and Rochdale College in Toronto, space for experimentation and discourse has been critical to the development and evolution of artistic peer groups and cultural movements for generations.

I believe Toronto theatre has suffered from a deficit of truly independent, radical space over the past decade. While many young theatre artists, including myself, have benefitted greatly from development programs run by established theatres we are in danger of becoming an overly institutionalized generation of artists. A generation who places value on recognition from the establishment, tentative to seek opportunities for ourselves outside the support of pillared companies and festivals, with selection committees, boards of directors, operational funding, and other structural hierarchies. The theatrical institutions of today were iconoclastic spaces carved from the cultural landscape in the 60s and 70s with a sense of urgency and purpose. As crucial as they remain in our ecology, they are now the establishment – with corresponding programming and financial obligations – and are limited in their capacity to represent the  needs and identities of the emerging zeitgeist.

Our generation cannot afford to exist perpetually in the demi-world of workshops and staged readings. Rather than striving for recognition based on a value system prescribed by the establishment, we need to stake out new territory for ourselves. Instead of standing by to inherit old institutions, or to be programmed by them, we should be actively making new space for ourselves, on our own terms and for our own needs.

There is a crisis of space in Toronto – a lack of affordable venues founded and operated by our young peers where year-round access to dialogue, experimentation, creation, and presentation is possible. A space outside the world of the four-hour tech call, the commercialized, review-centric, festival environment, or developmental programs of larger institutions who lack the ability to produce most of what is seeded within them. What is needed is an accessible, year-round space for emerging creators where ideas have the proper time and context to gestate, be torn apart, and reformed. Where the very nature of why we make performance, and what our generation wants out of performance, can be questioned and defined for ourselves. A space that costs nothing upfront to use – affording us more time in the theatre and less time at our day jobs (and mitigating the financial risk in creative risk-taking). 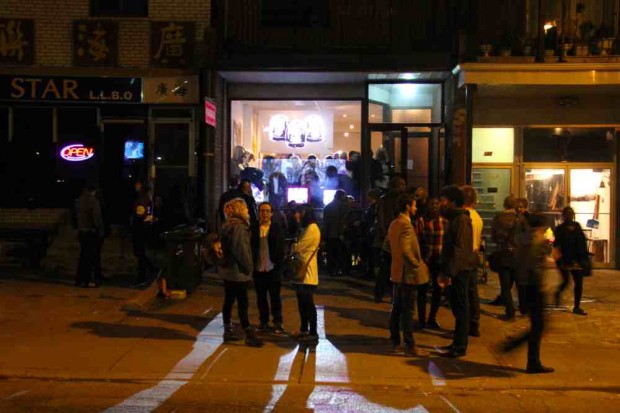 Videofag is @ 187 Augusta Ave in Kensington Market across from the park.

There are many inspiring models for peer-based collaboration in our own theatrical history – the founding of Theatre Passe Muraille in 1969, Factory Theatre in 1970, and the coming together of six independent companies in 1979 to create the B.A.A.N.N. Theatre Centre – and more recent examples, including Hub 14, Unit 102, Toronto Free Gallery, and companies like Native Earth Performing Arts and fu-Gen forging a home for themselves at Daniel’s Spectrum. Furthermore, many informal spaces like family rooms and kitchens have played critical roles in the evolution of Toronto theatre over the years. So there are many working models, historic and present, from which to draw inspiration – without, of course, fashioning replicas of existing institutions.

A few weeks back over coffee, Brendan Healy conveyed his support of Videofag and our hope to present risk-taking and transgressive work there – Buddies was founded on this ethos and continues to embody it to this day. I left the conversation, though, with the understanding that spaces like Videofag shouldn’t attempt to emulate even the most groundbreaking of institutions, but rather embrace their DIY nature and understand how they are specially positioned to present different kinds of work. This is not to say that we shouldn’t pursue opportunities to produce our work on established mainstages, but rather we should not wait to make work solely in these conditions. We should look at our independence as an asset – a freedom from commitments and expectations – to radically explore and innovate on our own terms. I suspect many of the exciting projects of our time will be pieces we create in the spaces and contexts of our own making.

With Videofag William and I want to bring together boundary-pushing artists, academics, curators, and shit-distrubers operating within a wide range of mediums and socio-political communities to form an atelier where new ideas can be explored and worked on over a timeframe tailored to each project. And it will succeed not because of anything William and I do but because a community of creators have already begun to invest emotionally and artistically in it, and are in the process of making it their own. Ultimately, it is the kind of space that I want to create work in. The kind of space I desire as an artist. The kind of space that inevitably will evolve to the point where it no longer fulfills the needs of the next generation and will, in time, be replaced itself.

Videofag is a storefront cinema and performance space in Kensington Market. While one of our primary focuses is supporting new queer voices in the city, we want to nurture transgressive work from shit disturbers of various ages, orientations, cultural backgrounds, and creative mediums. Ultimately, we are interested in creating an inclusive space for risk taking and discourse. www.videofag.com
Jordan Tannahill is a Toronto-based playwright, theatre director, and filmmaker who runs Suburban Beast, a performance company. He launched Videofag with his partner, actor William Christopher Ellis, in October of this year. For more information, or to propose a project to Videofag, feel free to email Jordan at jordan@videofag.com.
Filed under Jordan Tannahill, Videofag.