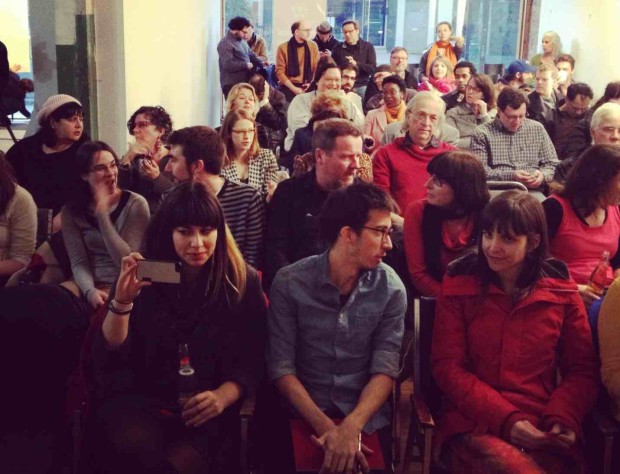 Last night The Theatre Centre and Praxis Theatre held #CivilDebates 2: Arts Boards, examining the relationship between Arts Boards and Artistic Directors through debate of the resolution:

Here’s some of the arguments that were put forth as summarized on twitter:

#CivilDebates @francoaboni @praxistheatre– we don’t have problem with Boards but a problem with how we “End” relationships.

Talks like these scare @brendan_healy because they risk demonizing boards #CivilDebates

.@gideonartaud term limits is a question in the community. should exist doesn’t always. #civildebates

Healy: If you’re part of a board and a concerted majority of board is feeling uncomfortable, chances are there’s a problem. #CivilDebates

. @instantravi asks “Is it the BODs responsibility to continue a company’s vision when the original visionary steps down?” #CivilDebates

.@healeytypes: Can anyone describe a power structure where power is shared and doesn’t rest just with the board? #CivilDebates

That is, I’m increasingly of the opinion that Ken Gass was trying to build a subway on Sheppard. #CivilDebates

Boni: AD should always have their letter of resignation in their back pocket. #CivilDebates

Final “?” from long time board member. Wants to be more than “walking wallet and rolodex”. #CivilDebates

After the debate, there was a lot of continued discussion, as debaters and attendees hung out and continued conversations that could not be accommodated by the strict one minute, timed question-and-answer format that shaped the final section of the event.

We changed our voting format for #CivilDebates 2 Arts Boards:

Attendees were polled upon entering the debate as to their position on the resolution. The initial result was:

After the debate, attendees also registered their position on the resolution as they left. The post-debate result was:

Thanks to all who participated. It was a very *civil* event on what has been a contentious issue.