“Live” performance: the search for imperfection 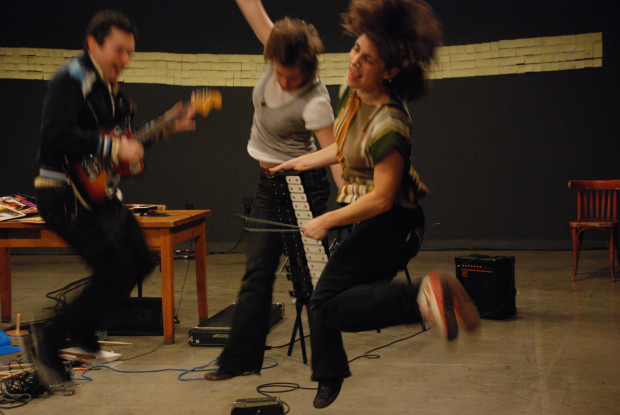 Hospitality 3: Individualism Was A Mistake by PME-ART, Photo by David Jacques

Authenticity is a feeling. There is no such thing as ‘real’ authenticity. Something is authentic when we feel it to be so.

I have been making performances for almost twenty-five years. If I think back to the beginning, I recall I started because I was searching for an experience that was considerably less mediated, less passive, less alienating than watching television, movies or listening to the radio. (Experiences that, for the most part, made me feel I was living in a world I could barely relate to.) At the time I believed, or at least hoped, that performances might be an art form that provided a more immediate experience; more live, more communal, less distancing. All of these youthful desires were also tangled up with questions of authenticity.

Twenty-five years is a long time to struggle with a single question, and my feelings about performance today are considerably more complex – a complexity that, at times, verges on bitterness. My work took place in a culture that clearly preferred the experience of watching movies to that of watching performance. This may simply be because movies have considerably more resources at their disposal, the stakes are higher, and these (plus other) factors attract a more skilled/brilliant set of artists. It might also be that the most recent art form wins. Or that movies are better. (Cinema is like a dream, and in a dream nothing can hurt you.)

However, I have also come to believe that the inherent fragility, the awkwardness, the vulnerability of a live performance is an uncomfortable space in a world filled with images. In most performances I see, the artists do everything possible to armor themselves, to protect themselves from the discomfort and judgment of the audience. This is more than understandable, and is often referred to as quality or professionalism. Nonetheless, for me, trying to make a performance perfect only makes matters worse.

In my work I have instead tried to engage with performance’s inherent weakness, to embrace the always-present fragility of doing something in front of other people who are watching you, the very quality that is, in fact, what makes something ‘live’ most different from the mediated world that surrounds us.

In his book Liveness: Performance in a Mediatized Culture, Philip Auslander historically demonstrates that the term ‘live’ was never used, in the sense we understand it today, before the invention of cinema. A performance is only ‘live’ in relation to a movie. In the theatre, rehearsal is simply an earlier form of reproduction. Making a performance exactly the same every time is a trick the movies can do so much better.

Where are the artists, working on stage and off, who are willing to take the risk of leaving things open, of allowing the performance to be as different as possible each and every time we come to it anew? Of allowing themselves to be vulnerable in the face of an experience they have no absolute way of knowing will work out for the best? (These questions are directed primarily at contemporary theatre, but it also seems to me that, more and more, performance art needs to engage in a similar struggle.) 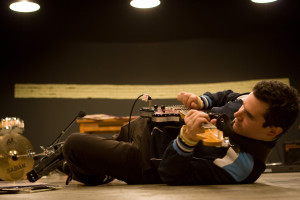 Of course, like everyone, I often prefer to watch something that ‘works’, whatever that might mean to you at different points of your life and artistic understanding. However, for me, a performance can only work if there is also some possibility that it might (at least partially) fail, if it is open to this possibility, if this is one of the ontological reasons that interests it in being a performance in the first place.

I now suspect the intimacy I was originally searching for in watching and making performances is the very intimacy I had already found in reading literature. (These days, I am also very much addicted to the internet.) Yet reading was my way of avoiding people, performance a way of bringing myself closer to others.

A performance is live when it feels live. For me, this feeling has something to do with taking an artistic risk, with avoiding the safety of over-rehearsal, avoiding a safety that often expresses itself as a desire for perfection, of asking oneself what is possible in a live-space that is simply impossible in a movie theatre (or on the internet, etc.), of not being too afraid when things go wrong, of seeing that when things go wrong it is actually only the beginning. 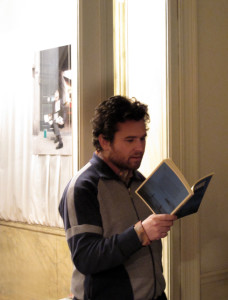 Photo of Jacob by Brancolina

Jacob Wren is a writer and maker of eccentric performances. His books include: Unrehearsed Beauty, Families Are Formed Through Copulation and Revenge Fantasies of the Politically Dispossessed. As co-artistic director of Montreal-based interdisciplinary group PME-ART he has co-created the performances: En français comme en anglais, it’s easy to criticize (1998), the HOSPITALITÉ / HOSPITALITY series including Individualism Was A Mistake (2008) and The DJ Who Gave Too Much Information (2011) and Every Song I’ve Ever Written (2012). He blogs here.

He will be participating as a Team Leader in Volcano Theatre’s inFORMING CONTENT, a three-day creation lab combining an exploration of experimental approaches to theatre-making. With inspiration provided by a group of scholars giving short presentations from their various expert viewpoints, inFORMING CONTENT aims to expose young theatre-makers to forms of creation that are outside the scope of most traditional training in Canada. Click here for more information. May 3-5, 2013.