Welcome to the theatre New Canadians: Show Us Your Papers 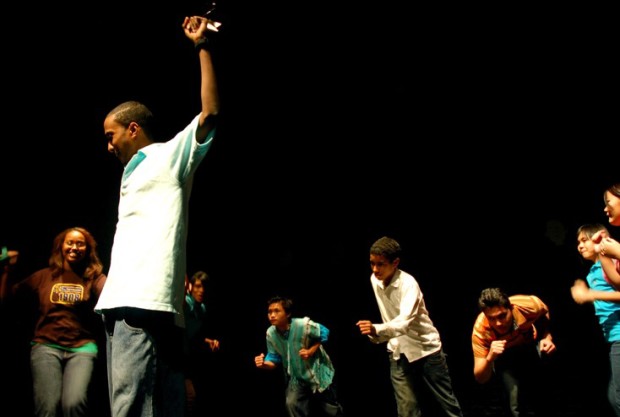 How can theatre be more welcoming to diverse audiences?

This is a question that preoccupies my mind, as I suspect it does for other smart companies looking at the make-up of the streets compared to the people in their seats.

Two days ago, it was revealed over $5 Million per year of federal investment in multiculturalism programming from Citizen and Immigration Canada goes unspent. This funding will now be reduced.

Though disappointing, this doesn’t surprise me in the slightest. When I was Associate Artistic Director of Cahoots, I created a youth program called Crossing Gibraltar, a theatre training and outreach program, tailored especially for refugee and newcomer youth.  Over the four years of the program, we ran over a dozen adaptive programs across Toronto, and gave performance training to over 150 newcomer and refugee youth, some as new as 7 weeks in Canada.

In 2008, we went through the enormously bureaucratic and redundant application for funding from Citizen and Immigration Canada.

The program we applied for was not listed anywhere. We had sought out funding, and were directed to a program that was closing but still had funds available. The officer was passionate and eager to see these funds allocated, and excited about our theatre projects. Although the application was unnecessarily dense, we were well motivated, as it offered funding at 2 – 3 times what was available to us from arts councils.

It was easy to see though how community organizations, especially grassroots ones primarily not working in English would’ve struggled, and thus the monies would be unspent. It was a slog, but we persevered.  And even though we knew there were funds available, we were thrilled to hear that we were successful for our entire ask!

The reporting and spending requirements were simply too bureaucratic and not feasible in the day-to-day operations of a program for a small theatre company. Because it would incorporate the Citizen and Immigration Canada logo, all communications with participants had to be vetted prior to beginning of the program, and had to be a certain percentage English or French.  (But what about our communications with the parents for our groups that were wholly Burmese and Karen? And who had just arrived the past spring?)

Under the program, we could not offer any honoraria to participants, an integral part of the program’s success in getting buy-in from immigrant parents.  In the end, they conceded that $1/day per youth was permitted but only if we eliminated the food budget line. (Occasional Halal pizza and vegetarian samosas were also integral to the buy-in from parents.  And with some refugee youth, they were simply not in a place to learn hip-hop or puppetry when they were preoccupied with hunger.)

Lastly, the requirements to select participants was too rigid.  They involved checking paperwork, country of birth, last known countries before Canada, confirmed registration in the school system and on and on and on.  The process was completely antithetical to the spirit of the program, which was an invitation to participate in the performing arts for newcomers to Canada.

The conditions of the program would have easily kept youth away instead of welcoming them.  I don’t know for sure if we ever worked with youth who did not have their paperwork in place. We may have. I don’t know. But I do know every youth we worked with valued the program highly and wanted to be there.

Our programs ran successfully without that funding, finding other opportunities in the councils and in private funding. As we brought the youth closer to theatre, we were also introducing them to Canada.  We did so by maintaining the values that I think most Canadians would appreciate:  friendship, acceptance, openness. We welcomed them.

Back to the question: How do we welcome more diversity in our audiences?  There are many answers, and many ways to address that disparity.  (I’m working on it!) But I wonder, I do wonder, do we have any chance of welcoming new Canadians to the theatre, if our country cannot welcome them first?

Marjorie Chan is the incoming Artistic Director of Cahoots Theatre, a company devoted to creating works that reflect Canada’s diversity in all forms.