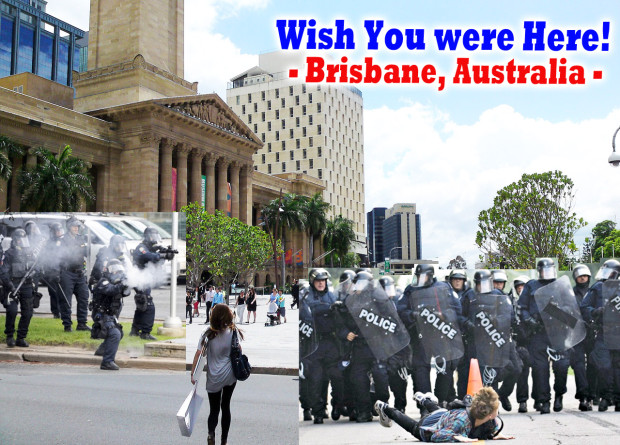 I’ve created some special G20 Postcards with images from Toronto’s G20 Summit dropped into pictures of you, beautiful Brisbane. Although, looks like you’re well on your way to creating your own memories.

Hey Brisbane. So I heard the news that you are getting your own G20 Summit Meeting next November. Well, I had the G20 come to my home, Toronto, back in 2010 so I thought I’d give my fellow Commonwealthers a heads up. Particularly when I hear Queensland premier Campbell Newman say “What we don’t want is the scenes that have blighted other cities such as Toronto…” Which is a statement I agree with, but then why is he planning the Brisbane G20 in the exact same way? (I should mention now that I was unlawfully arrested, never charged, in a mass arrest during the Toronto G20).
The debate is already on about the Queensland Government’s proposed G20 Safety and Security Bill (and it won’t just affect Brisbane’s horde of Zombies). Here are some facts on how the security plans in play for you, Brisbane, worked out for us in Toronto. (SPOILER ALERT: It ends up being “the most massive compromise of civil liberties in Canadian history.”)
1. Expanded Police Powers

Under the new security bill, security forces (made up of police forces from across the Commonwealth, including New Zealand and Canada) will have expanded powers during the Summit. Inside the G20 Exclusion Zone, officers can arbitrarily perform pat-downs or strip searches on anyone, hold suspected agitators in detention for the duration of the summit, ban common items such as eggs, cans and hand tools. Police will also be allowed to publish the names and photographs of anyone they decide should be prohibited from entering The Zone.

In Toronto we had many similar laws in play, including a much-scorned secret law passed without proper notice. The results? Well, as the official investigation into policing at the Toronto G20 Summit found, it was goddamn terrible. Not so much because of the vandalism to cars and windows by 75-100 people (who the police were ordered not to engage with for some reason), but because of what happened to people.

With 20,000 militarized police officers in downtown Toronto there were multiple cases of excessive force used by police resulting in serious injury, and over 1,100 people arrested in Canada’s largest mass arrest (over 900 were never charged). Hundreds of people were unlawfully kettled in by riot officers, sometimes for hours in the pouring rain and many more were subjected to arbitrary stop and searches by officers. There were 334 strip searches (but only proper documentation on 281 cases). Many of the the “weapons” seized by police had nothing to do with G20 (including toys belonging to a fantasy role-player). By all measures, an utter mess. 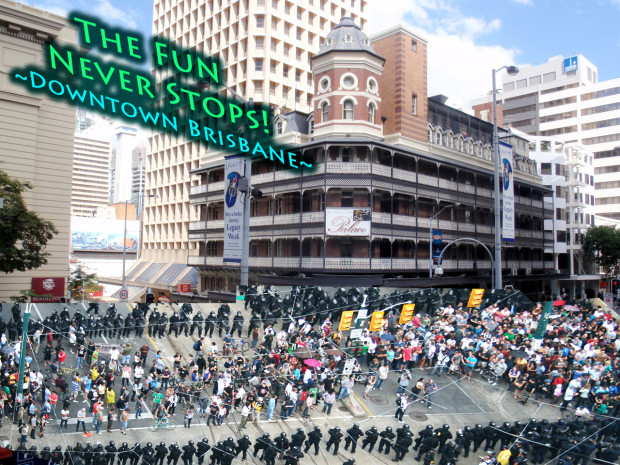 2. Three Day DetentionPart of the bill would allow police to arrest and detain anyone they deem a threat for three days. In jail. Without bail. Items that could deem you a threat? Eggs, cans of beans, model airplanes, surfboards, and reptiles. Yes, reptiles. Some folks right there in Queensland are already trying to give you a heads up on this one. They note that innocent people will likely be arrested and Brisbane actually doesn’t have enough room to house large numbers of detainees.
Here in Toronto, similar tactics got us 1,100 people arrested and sent to a temporary detention centre built inside a movie studio. Protesters, bystanders, tourists, journalists and even a transit worker were swept up in the mass arrests. Most were held in atrocious conditions and Queer prisoners were segregated into their own cells. This stands as one of the most vile failures of the police during the Toronto G20 for a number of reasons.3. “It’s Great for the Local Economy!”
There seems to be an ongoing campaign foretelling of the riches G20 will be bring to Brisbane. Many Brisbane shop owners are starting to grow concerned however about the shut-down and elimination of consumer foot traffic. The cost of the Toronto G20 Summit ballooned to a ludicrous 1.1billion, a huge chunk of it being the security budget. Local Toronto businesses reported record losses and had to fight the Federal Government tooth-and-nail for partial compensation for damages and revenue lost. It was, however, a huge payday for the police who also held onto many of their new toys and surveillance cameras. 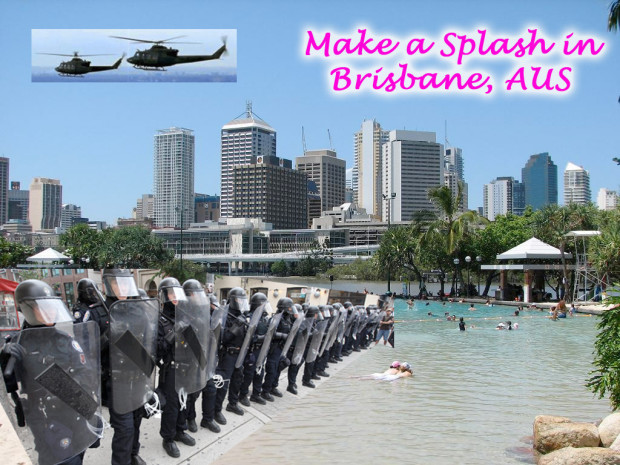 4. Aftermath
After millions of dollars and years of investigations, here is what I can tell you: Everything that is being planned for you, Brisbane, has brought misery to every city before you: London, Pittsburgh, Toronto. Finding accountability and justice over the past 3 years for policing crimes at the Toronto G20 Summit has been a demented joke. From our Mayor rolling over, to only ONE officer being handed a criminal conviction, it’s been a farce.
Right now I’m on a cross-country tour of Canada, sharing my G20 story with my fellow Canadians. On the first stop of the tour, way up in the Yukon Territory, I read about what’s being being cooked up for you Brisbane, and felt I had to share these facts with you. However, you may want to hear more from Queensland Council for Civil Liberties President Michael Cope, who had this to say about policing powers in Toronto for the G20: “According to the systemic review report they had the power to in effect remove anybody and search anybody without any suspicion whatsoever unlike this legislation, so they had extraordinary powers, which didn’t stop this.”
Good people of Brisbane, one final time – heads up. 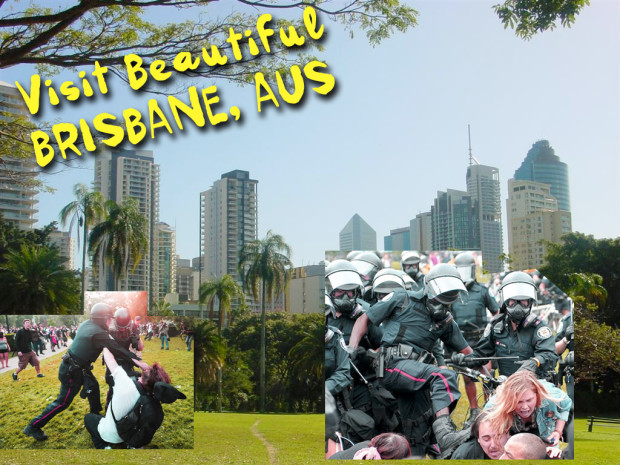