Mind, Muscle and the Music of the Spheres

When you’re writing a science fiction story about wormholes and time travel, sooner or sooner you’re going to bump into Stephen Hawking. The world-famous physicist and Brief History of Time author even has some theoretical black hole quantum-effect radiation named after him, for heaven’s sake. He’s just. that. good.

But there’s another resonance with Faster than Night that we didn’t anticipate. Hawking, like us, uses facial-capture technology.

Our first blog post described the head-mounted camera that will track every movement of actor Pascal Langdale’s mouth, cheek, eye and brow, and pass the data to a computer to animate his astronaut avatar.

Stephen Hawking’s “headcam” is a tiny infrared sensor mounted on the corner of his eyeglasses, but it is infinitely more powerful than its size suggests.

As a result of the motor neuron disease that has wasted his body, only the shortest neural pathways, such as that between his brain and his cheek muscle, are still under his precise control. The infrared sensor on his glasses detects changes in light as he twitches his cheek, and this almost indiscernible bit of motion-capture is his sole means to control everything he does on his computer. 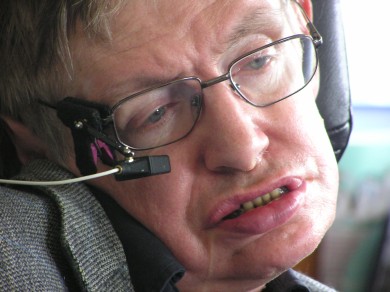 On the screen, a cursor constantly scans across a software keyboard, until his signal stops it to select a letter. The software has a word-prediction algorithm, so he often only has to type a few letters before he can select the whole word. When he has built up a sentence, he can then send it to his iconic voice synthesizer, a piece of technology which is now almost 30 years old.

A new documentary released last year, titled simply Hawking, reveals the race against time to keep his communications technology ahead of the progression of his disease. (This sequence begins at the 19-minute mark.)

Jonathan Wood, Stephen’s graduate assistant: “Stephen’s speed of communication has very gradually slowed down. A few years ago, he was still able to use his hand-switch and able to communicate by clicking this switch on his wheelchair. When he wasn’t able to do that anymore, we switched over to a switch that he’d mounted on his cheek. But with him slowing down with that, we’ve approached his sponsors, so they’ve been looking into facial recognition.”

Intel technician: “This is a high-speed camera which will allow us to see verifying details on the facial expressions, and this will help us to improve the rate of your speech and input.”

Stephen Hawking: “I have had to learn to live with my slow rate of communication. I can only write by flinching my cheek muscle to move the cursor on my computer. One day I fear this muscle will fail. But I would like to be able to speak more quickly…. I am hoping this current generation of software experts can harness what little movement I have left in my face, and turn it into faster communication.”

This intriguing and dramatic arms race (face race?) has Intel’s best and brightest looking for ever more sensitive sensors and new techniques to give the physicist better ways to control his computer. It even has one American scientist investigating a means by which Hawking may one day be able to “write” directly from his brain, bypassing the facial muscle altogether. As the BBC reports, “In 2011, he allowed Prof Philip Low to scan his brain using the iBrain device… a headset that records brain waves through EEG (electroencephalograph) readings – electrical activity recorded from the user’s scalp.”

Next stop: hoisting a brewski with the Canadarm?

You think we’re joking, but the Hawking documentary ends with a delightful sequence in which Richard Branson of Virgin Galactic suggests that the best astronaut might be a man whose mind has never been bound by the gravity that holds his body:

“I just couldn’t think of anybody in the world that we’d rather send to space than Stephen Hawking. And, you know, we haven’t offered anybody a free ticket, but it was the one person in the world that we felt, ‘We’d love to invite you to space.’ And it was incredible when he accepted. I went up and saw him that day, and he told me to hurry up and get the spaceship built because he wasn’t going to live forever. Hopefully next year, we’ll take him up. I think that he feels that if he goes into space personally, he can lead the way.”

« Between Appropriation and Entrapment, the Refugee and the Ruin: Notes on the Uncanny and the Cartography of Absence in The Ballad of _______ B
Tea, Pound Cake, and a Salad »