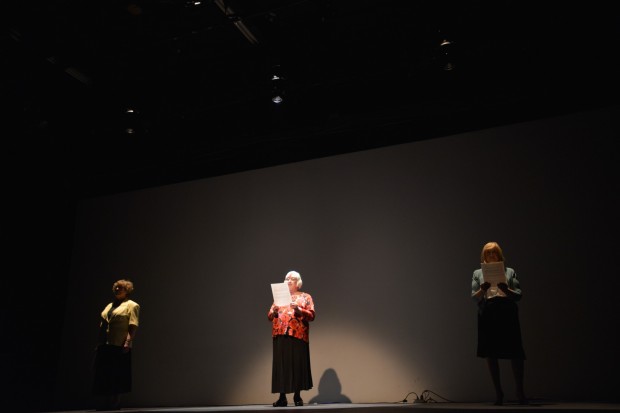 Photo of #legacy by Greg Wong

#legacy opened and closed on April 12th. To say that it was a moving experience would be the understatement of the year. The opportunity to work with these incredibly brave and talented women in such a supportive atmosphere is a process that I will cherish for a long time. If you want to see more about how the week-long residency looked, check out my Storify post. As a follow-up post, I’ve decided to share the three letters that closed the piece–one from each of the women. They are powerful, poignant, and reflective of a legacy that transcends Twitter. This week, I’m sharing Judith’s.

Do you remember the story I told you about my childhood teddy bear, John?  I took him everywhere with me.

It was war time when I was born and my father, who was in the RAF, was away from home.  He was given special leave to come home for a few days with the family.  He brought John with him.  John was my first gift. I loved my bear and nothing in the world would have made me part with him at any age.  He helped me with my homework, came on family picnics, went to bed with me and even helped me through my nursing training.

During our removal to Canada, he was packed in one of our big shipping crates.  Alas it was John’s crate that went missing during the long Atlantic sea crossing.  I had to fashion my life as an immigrant in a strange country without him.

When I told you the story of John, my old teddy bear, I never dreamed you would be paying so much attention to it, because you were only five years old.  You asked me to draw a coloured picture of John so that you could find me a new bear that looked like him. I was then presented with John II. Now ten years later, I am involved in a project that has made me remember all of this.

For me, John ll is as good, or better, than John l, because it was given as a legacy of love.

« Masks, Morphing and Motion
The Ballad of _______ B: Interactive Script Online, and Images from Rehearsal »