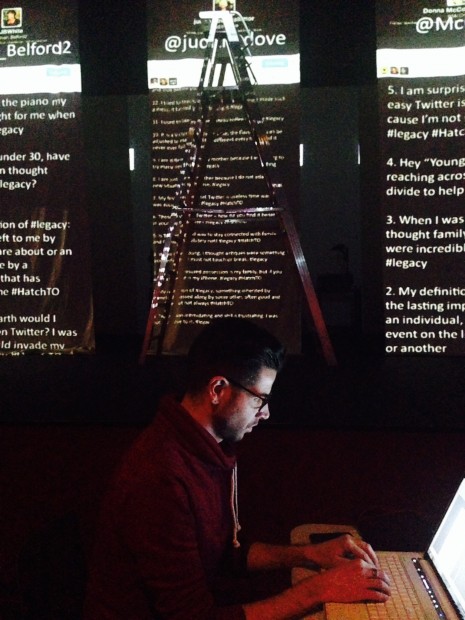 I am the dramaturg for #legacy by Rob Kempson, in residence this week at Harbourfront Centre as part of HATCH 2014! I think this project is fascinating because it combines so many disparate elements: integrating older adults who don’t identify as artists, technology, and social media into a new play development process. Part of my work has been to facilitate the creation of a “Twitter script” – a series of tweets that will be sent from the performer’s twitter accounts during both performances on Saturday, April 12.

Audience members with smartphones (and Twitter) will be able to follow the performer’s tweets from designated “Tweet seats”. For those who can’t follow on Twitter (or do not want to) the Twitter script will also be projected on stage at specific points through out the play. Some of the tweets provide subtext or context to what is being on said on stage. Sometimes they share links to songs, articles about issues mentioned in the play, even a funny cat video. For audience members who choose to follow along, the Twitter script will function a bit like Pop Up Video, the popular 90’s TV show that shared “info nuggets” during music videos.

To help facilitate the creation of the Twitter script I gave the women a list of questions that related to the themes or ideas that they discuss in the play. I asked them to respond to each question in the form of a tweet. We then went through the script and arranged the tweets so that they would emphasis what was being said on stage, or sometimes provide a contradictory point of view.

People in the “tweet seats” will be encouraged to respond via twitter while they watch the play. In one scene, the tweets from the audience will be projected on stage and the women will improvise in response to what they read. This is where the experimental nature of HATCH becomes apparent, as well as the courage of the three women we are working with. Not only are they writing and performing — though they don’t identify as writers or performers — they are willing to come in direct contact with audience reactions to their show while on stage. I am more and more in awe of them every day! 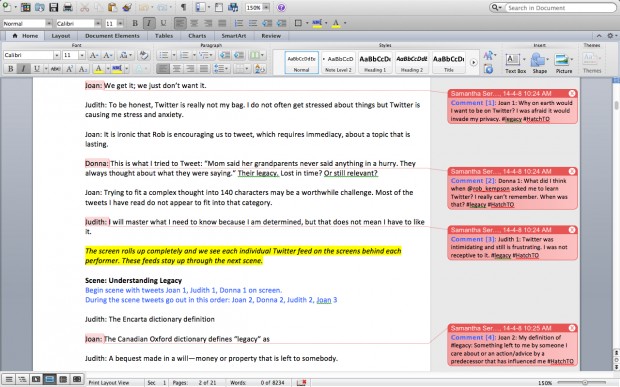 It’s interesting to me that our twitter script and the audience’s responses will also become a record of the play. I don’t know if Joan, Judith, and Donna will continue to tweet after April 12th. Judith has already stated that her best tweet will be at midnight on April 12th and it will read: “Thank god I never have to tweet again!” But even if their accounts lay abandoned, the legacy of this creation process will remain in the twitterverse. It serves as an example of how the immense amount of content many of us generate and share every day becomes part of our own online legacy.

Now that’s something to think about before you post another funny cat video, or a picture of what you made for lunch!

The public presentations of #legacy are at 2pm & 8pm this coming Saturday, April 12th. Click here for more information & the link to buy tickets.

« Performance, Capture and Interactivity
Concept Images and Other Sketches for _____ B »