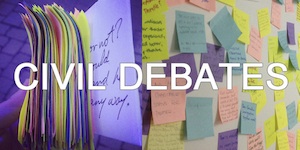 WHERE: The Theatre Centre Pop-Up, 1095 Queen St. West, at Dovercourt

PWYC at the door. No RSVP required. Cash bar for the thirsty. 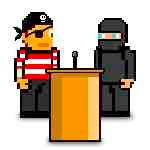 Not on Twitter/Don’t want to be? Below is a livestream of the tweets and pictures using the #CivilDebates hashtag, feel free to follow along live from this post.

Want more info on the topic, the debaters, and how the event will work? CLICK PIRATE & NINJA. 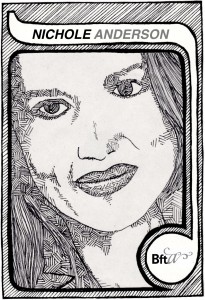 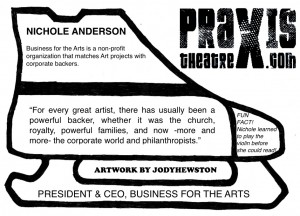 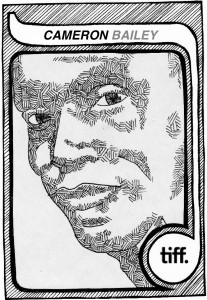 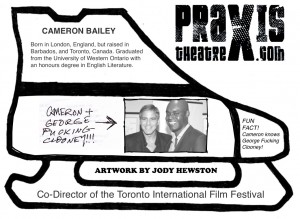 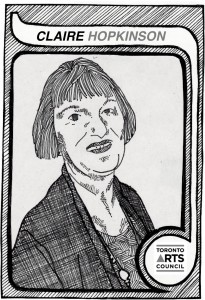 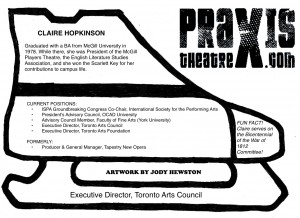 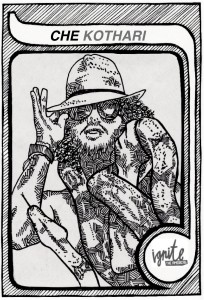 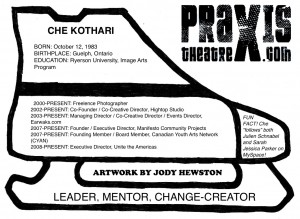 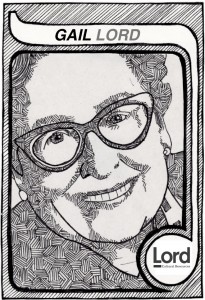 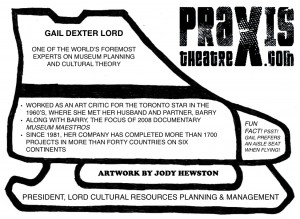 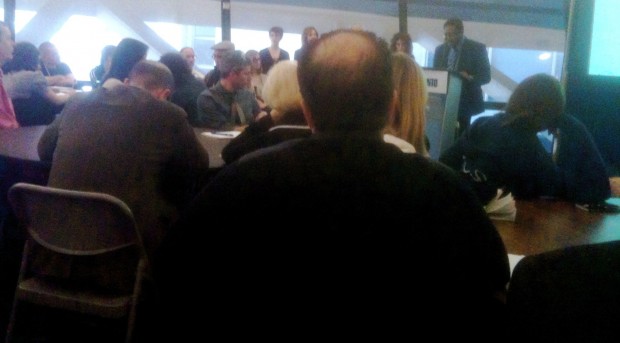 On Monday, Praxis co-Artistic Director Michael Wheeler and I attended the only downtown public consultation for the new Toronto Culture Plan not focused on youth issues.

We were armed with our smartphones and the Twitter hashtag #creativeTO, which I had also used at the public consultation in Etobicoke in February. Separately, we made the rounds of the various tables open for discussion and tried to document what we were hearing.

Below is a partial transcript of the event, a 100 tweet summary from the past few days with the most recent tweets at the top,  You can find the full and interactive transcript online here.

And remember, the final public consultation (on youth issues) will be at City Hall on April 7th from 6pm to 8:30pm. I’ll be there with my smart phone and a hashtag. Hope to see you there. 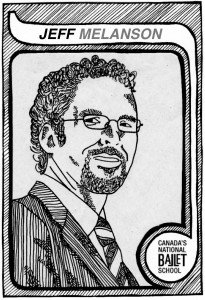 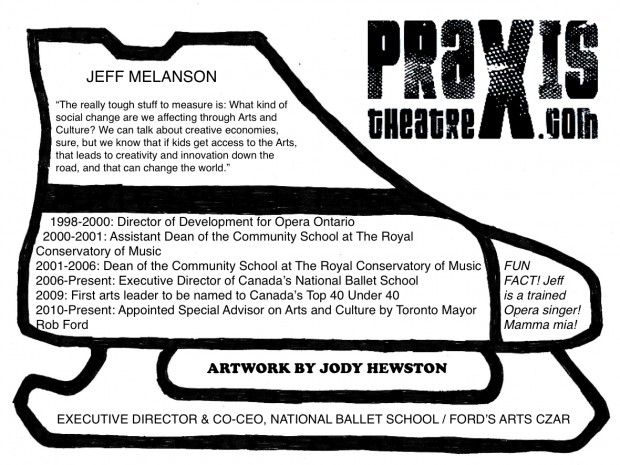 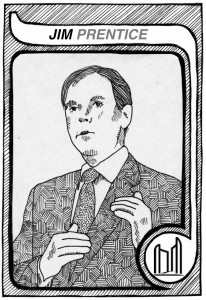 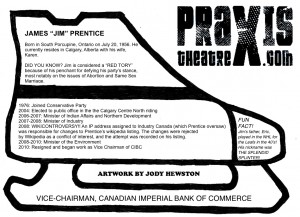 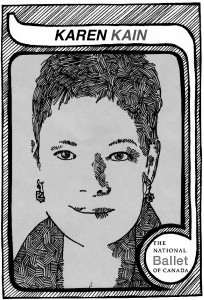 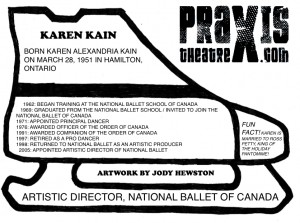 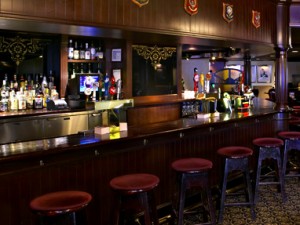 This is happening today, and Praxis will be there tweeting 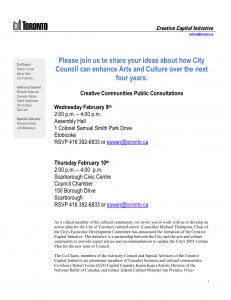 Last week in this space, we told you about the Toronto culture consultations. The first of those public consultations is today from 2pm to 4pm at the Assembly Hall in Etobicoke, and I’ll be there “live tweeting” for Praxis. You can follow our Twitter feed here, and if there is a hashtag for the event, I’ll come back and add it to this post so you can follow along with everyone else.

In the meantime, you might be interested in looking back at that earlier post about the consultations to see what happened after the events document was circulated, and then read the even more interesting comments to our post.

UPDATE: EYE WEEKLY is reporting that “The City is actually holding 11 consultation sessions on the culture plan, seven of them in downtown neighbourhoods.” Additionally, that “incomplete information had been circulated to some organizations “. Safe guess that’s the document below. Assuming the math stays the same – you now have 22 hours to talk to the big guns. 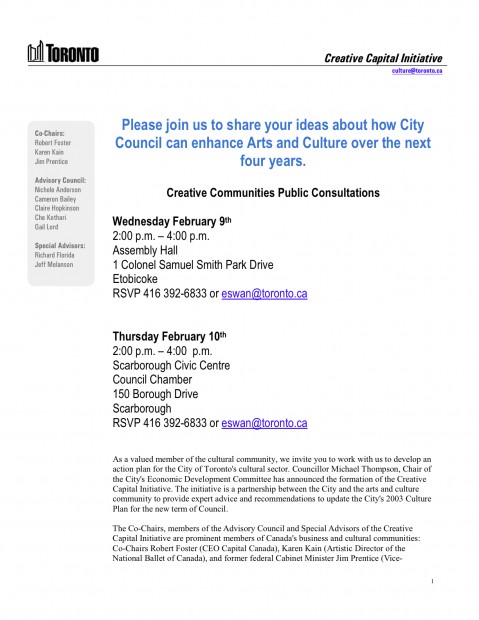 Similar to the recent city budget consultation process under Mayor Rob Ford, Toronto’s just-announced culture consultations will have no downtown meetings -holding consultations from 2pm-4pm on February 9th in Etobicoke and February 10th in Scarborough.

Titled, “Creative Communities Public Consultations”, these will presumably form some basis for recommendations made to City Council somewhere down the road.

So what is going on here?

There are three co-chairs of a lightning-fast pair of consultations done outside of the downtown core that will be used to inform a re-imagining of Toronto’s culture plan:

This panel will have two “special advisors” separate from five other advisory council members from arts and business: Richard Florida – a controversial U of T theorist and pop culture guru who has postulated that Canada’s Social Compact should be replaced with a “Creative Compact”, and Jeff Melanson – the National Ballet School’s Executive Director and Rob Ford’s Arts and Culture Advisor.

For some more context on why this could get interesting in a hurry, read this recent CBC article on a panel held by the Canadian Conference of the Arts, attended by arts advocates from across the country in Ottawa. Titled, “Artists: Powering the Creative Economy?” it rejected the Martin Prosperity Institute proposed “creative economy” logic to advocating for arts funding. The centrepiece of the article: Richard Florida’s own statistician laments, “It’s been a trap.”

RSVP quickly if you would like to participate as spots are likely to fill up fast.

*Also the subject of a classic Yes Men action to highlight Canada’s inaction on climate change.