The emergence of the Creative Economy and Creative Class  (via Wikipedia)

The publication of John Howkins’ The Creative Economy and Richard Florida’s book The rise of the Creative Class gave the movement a dramatic lift as global restructuring was hitting deep into the US. Its timing hit a nerve with its clever slogans such as “talent, technology, tolerance” and interesting sounding indicators like the “bohemian index” or the “gay index”, that gave numbers to ideas. Importantly it connected the three areas: a creative class – a novel idea, the creative economy and what conditions in cities attract the creative class. Florida concluded that economic development is driven in large measure by lifestyle factors, such as tolerance and diversity, urban infrastructure and entertainment.

Critics argue that the Creative City idea has now become a catch all phrase in danger of losing its meaning. Cities also tend to restrict its meaning to the arts and activities within the creative economy professions calling any cultural plan a creative city plan, when this is only an aspect of a community’s creativity. There is a tendency for cities to adopt the term without thinking through its real organizational consequences and the need to change their mindset. The creativity of the creative city is about lateral and horizontal thinking, the capacity to see parts and the whole simultaneously as well as the woods and the trees at once. 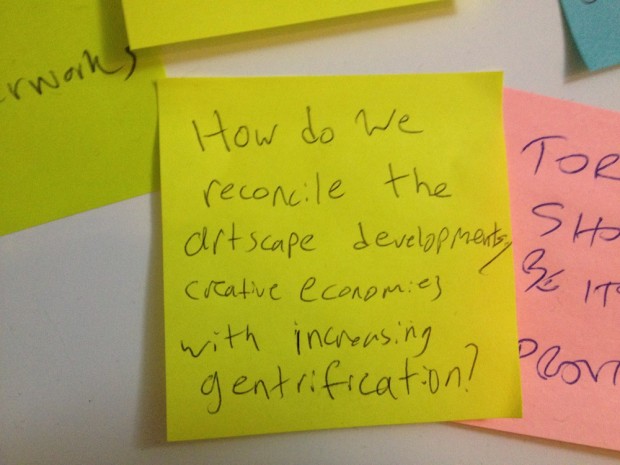 Side A – SUPPORTING THE RESOLUTION

Darren O’Donnell is a novelist, essayist, playwright, director, designer, performer, Artistic Director of Mammalian Diving Reflex and Research Director of The Tendency Group, an emerging think tank and social policy laboratory. His books include: Social Acupuncture, which argues for an aesthetics of civic engagement and Your Secrets Sleep with Me, a novel about difference, love and the miraculous. His best-known work is Haircuts by Children, which was first created in collaboration with the children of Parkdale Public School in 2006. In addition to his artistic practice, he is currently an Msci candidate in Urban Planning at the University of Toronto.

Roy Mitchell is the Executive Directorof Trinity Square Video. Roy comes to the Trinity team as a member, past board member and trouble maker. His work has screened internationally, and he has curated for local film festivals and written on art, film, and video. He believes a busy artist-run-centre is a good artist-run-centre.

Side B – OPPOSING THE RESOLUTION

Kevin Stolarick: Dubbed the “Official Statistician of the Creative Class”, Kevin Stolarick, PhD, combines a depth of knowledge with an appreciation of the importance of finding and sharing the knowledge or “pearls of wisdom” gained from his comprehensive understanding of the Creative Class and the Creative Economy. He is the Research Director at The Martin Prosperity Institute at the Rotman School of Management, University of Toronto. He holds a PhD in Business Administration and an MBA from the Tepper School of Management, Carnegie Mellon. Kevin provided quantitative research and analytical support for several of Richard Florida’s books including The Rise of the Creative Class and Rise Revisited (the 10thAnniversary Edition).  He continues in collaboration with Richard and others researchers.

Sabra Ripley is a community artist and arts-advocate with a Masters of Public Health in community development and health promotion, focused on arts as a means of developing strong, healthy individuals and communities. She is currently the Executive Director of Ottawa’s House of PainT Festival of Urban Arts and Culture and a Cultural Outreach Officer in the City of Toronto’s Arts Services unit. In recent years Sabra has worked as Interim-Coordinator for the billboard tax advocacy group Beautiful City, as a Management Consultant for the Artists Mentoring Youth Project, and as a Researcher for the Scarborough Arts Council’s Creative Mosaic project. As a community artist she danced with the all bgirl DeCypher Crew and acted with Salamander Theatre for Young Audiences.

Following the formal debate, the floor will be opened to the audience for questions and comments.

The Role of Audience:

Each attendee will be provided with 2 tokens.  One may be used to make a statement or ask a question when the floor is opened to the audience. The second may be used to register support for or against the resolution when exiting the pop-up at the end of the evening.

At the conclusion of the debate, the 4 debaters who will tackle the following resolution at Civil Debates #2 on April 1st will be announced.