Producing on the fringe 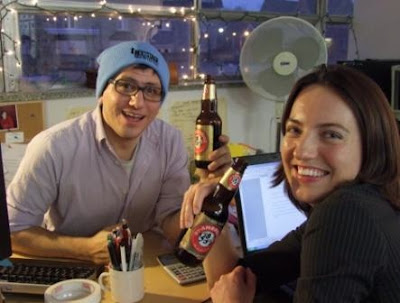 Before becoming a Supervisor with Special Events (Cultural Division) for the City of Toronto, Bridget MacIntosh was the Producer of the Fringe of Toronto Theatre Festival, and Founding Producer of The Next Stage Festival. This made Bridget the ideal person to sit down with Gideon Arthurs, newly minted Executive Director of The Fringe of Toronto Theatre Festival, to have some beers and hear what’s new with The Fringe.

BRIDGET: So I hear January is the new July Gid. Tell me what what’s up?

GIDEON: Everything. I mean everything. I have a new life-affirming/hopelessness-inducing task management system that reminds me that there is simply just no more time for anything. Mostly, that list is filled with the final details and prep for the Next Stage Theatre Festival (Jan 7-18!!!!) There are also one or two notes about the impending final gasping collapse of the world economy and the ensuing disappearance of arts’ funding in Canada and what extreme contingencies we’ll have to roll out if/when that happens. Also, I need to polish my boots before the festival starts and buy brown sugar.

BRIDGET: I made some brown sugar fudge over the holidays. Always good to have brown sugar nearby… but really I can’t believe it’s already time for Next Stage. I still have these moments where I think back and am like, “Wow! Did that really happen?” As the second instalment of Next Stage begins, just what kind of festival do you think you’ve inherited with Next Stage?

GIDEON: A fresh, full of potential, important festival. A festival that is a new, but deeply pure and true, incarnation of the Fringe’s principles. A brave, crazy one too – mid-January, a tent, no lottery… what the hell were you thinking? On a personal level, I’ve felt that NSTF has also afforded me the greatest sense of possession since I started at the Fringe almost a year ago. It’s been harder to understand and personally affect the massive beast that is our summer festival. With 20 years of institutional structure behind it, I sometimes wonder who the hell I am to try and improve it… But with NSTF being so young, and so full of potential for growth and creative input, I have a real view about what this festival can become, and how our team can make that view a reality.

BRIDGET: I know you know my thoughts on this but how do you think the Next Stage fits into the overall role of the Fringe of Toronto Theatre Festival?

GIDEON: I think it fits perfectly – more than an extension of what we do, it’s an evolution that makes sense. After 20 years, the Fringe is really in a place to claim its leadership role and continue to represent our constituents in new and innovative ways. Sometimes, talk like this frustrates me, but I find myself saying over and over again “Why don’t they know!? We’re at 58,000+ in attendance, we’ve given out $4 million over twenty years to thousands of artists, we employ over 100 people a year, we’re spread out to 30 different venues, we were the launching pad for the two most successful productions in Canadian Theatre… why aren’t you taking us seriously!!??” With Next Stage I honestly believe we’ve shown that we’re responsive and capable of growth, and therefore more “serious”, more confident, more capable. My hope over the next few years is to see the Fringe become THE voice for emerging and independent arts, a nexus of creative voices that cumulatively are stronger and louder than when alone, and who’s ranks include artists AND patrons as advocates for culture in our city.

In Naval terms, Next Stage is the Cruiser to the Fringe’s Battleship.

BRIDGET: Or in bad 80’s movie terms, the Goose to the Fringe’s Maverick?

BRIDGET: Next Stage is such a huge step in the evolution of the Fringe. With such a dynamic festival so you have any particular hopes or goals for the Next Stage over the next few years?

BRIDGET: Hey, you’re also coming up on your first year anniversary at the Fringe and we’ve still been playing tag with meeting up for steak. Although having beers and talking about theatre are great, just when is this meet for steak thing going to happen?

GIDEON: You know, my Mum’s flank steak was always my favourite, but it takes too long to marinate so I never make it.

BRIDGET: Any other challenges you’d like to talk about?

GIDEON: This job has truly been the challenge of a lifetime. In my four year plan, year 1 is labelled “Survival”. One of the major issues, that I think many of us in the arts face, is that there is infinite work to do. There is no ceiling, no control, and achievements are intangible – it’s that old “bringing back a 96% on a test and your parents asking you where the other 4% went”. No matter how many people come to the festival, no matter how much money we raise, there’s always more. No matter how many new programs we implement, we could implement more of them or make them bigger…The only limit is the exhaustion line, and when my wife tells me to come home. The first 48 hours of the ’08 Festival were possibly the worst 48 hours of my life. I was in so far above my head, I can’t even really remember what happened after we discovered that our ticketing software had crashed opening morning and none of our walkie-talkies worked.

BRIDGET: I once burned myself on a faulty festival cell phone.

BRIDGET: I’m a *bit* biased here but I’ve always felt that the Fringe senior staff have been, and I’m sure continue to be, one of the finest festival staffs you can find. Graciousness aside, now, between you and me….if your entire Fringe senior staff were a street gang, how would you describe their individual fighting styles and who would come out on top if pitted against one another in a death match? I’m just saying, it’s like I’ve though about this before or anything. 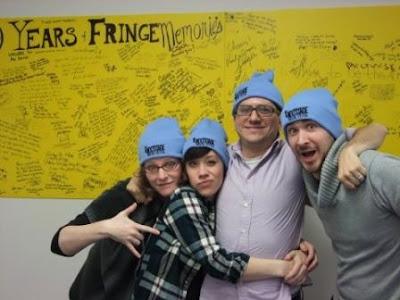 GIDEON: We tried to arrange this one fight once with SummerWorks but we would have had to lend them our weapons and several of our staff, so it didn’t seem worthwhile. I see my staff/gang as more of a post-apocalypse urban gang than dance flick or 80’s gang. Paula “Silent and Violent” Forst, our Producer, is definitely the muscle – I’d say she’d do well with two giant mallets for some crashing and smashing. Adam “Grasshopper” Kirkham, our fundraiser, is quick on his feet and packs a wallop with a sock full of dimes. Lindsey “Voluntold” Clark, doing our volunteer coordinating, doesn’t engage in hand to hand herself but commandeers a legion of blood-thirsty volunteers to do her fighting for her. And then there’s the techs and box office staff, who to be honest will do anything for beer…They’re the group that shows up just when it looks like we’re outmuscled in a fight… the cavalry if you will. When push comes to shove though I’d have to say I would win in a fight against all of them, only because I’m an expert at driving people into a blind rage that allows me to take advantage of their weaknesses.

BRIDGET: Hey since we’re not doing the steak thing for a while, might as well tell me what you’re doing in the meantime. I hear that there are some new activities afoot? Do tell.

GIDEON: I’m incredibly excited about what we’re calling our new “initiatives”. We’re hoping to make official announcements soon, but they go as follows:

The Fringe Evolution Fund – to encourage remounts of successful Fringe shows, we’ll be giving out grants to help cover production costs for Fringe shows re-produced by the original company within five years of first appearing at the Toronto Fringe. We’re hoping to be able to give out as much as $10,000 within three years.

The Charrettes – inspired by design salons of the 19th century, this is a series of five meetings with relevant stakeholders to propose solutions to problems facing the performance community. Our first Charrette, about the shortage of rehearsal and performance space for small companies was a great success. Our next one is about adapting fundraising techniques for larger institutions to suit small companies… stay tuned for details.

Office Residencies -we have all the resources in place to welcome small into our offices during our down periods, to help bring their producing out of their kitchens and into a creative hub with other arts administrators.
OTICs (Online Ticketing for Independent Companies) – we’re offering subsidized access to our new online ticketing systems for small companies.

BRIDGET: Love it. I think its important to get he word out about programs like these. To that end, this will eventually end up on a theatre blog. Any random thoughts on theatre blogs?

GIDEON: Isn’t the internet going to save theatre? Sometimes, I think we want to think that because the internet’s cheaper than everything else and is all we have… Now excuse me, I have to check my Facebook… for professional reasons.

BRIDGET: Oh yeah, sure no problem.

BRIDGET: Well Gid, thanks for the chat. Any words of wisdom to end off on? Any overall posits in the state of the performing arts?

GIDEON: I keep on trying to come up with different ways of saying this that don’t make me sound like I’m commoditising the creative process, but I give in. Money. Money is the challenge of the moment, not because money makes good art, and certainly not because we make art for money, but because without funding we are forced into impossible, un-artistic situations. I’m very afraid of what sort of art will be made when what seems to be brewing in arts funding comes to pass…