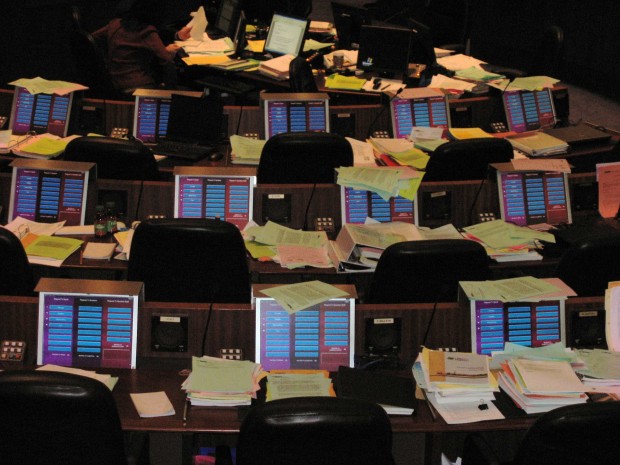 Yep, that’s right: Toronto has a new sign bylaw and it’s a pretty good one. A ten-year battle by public space advocates was passed by an even wider margin they hoped for. It will create more than $10 million for the City of Toronto annually. Their success will likely go down as a famous and glorious moment in grassroots political organizing in Toronto, and a good story for the kids about what you can accomplish with a huge dose of sticktoitiveness and a flawlessly executed and integrated social and mainstream media campaign.

The news for arts funding advocates was less rosy. Even though the City of Toronto staff report recommended directing the revenue to arts funding, the bylaw was passed without this stipulation and there are many assurances, but no guarantees, that some of the funds will be earmarked for art. Councillor Rob Ford stated explicitly that he believed the monies would not end up being used for arts funding.

Ford was emblematic of the virulent anti-artist bias that still exists within City Hall. Attacking artists in attendance, referring to them as “freeloaders”, he questioned their ability to simultaneously be employed and participate in democracy by attending City Hall. Councillor Minnan-Wong went as far to suggest that artists are not real people – hoping to ensure that the funds would never see any arts groups going instead to, “real people, real communities”. 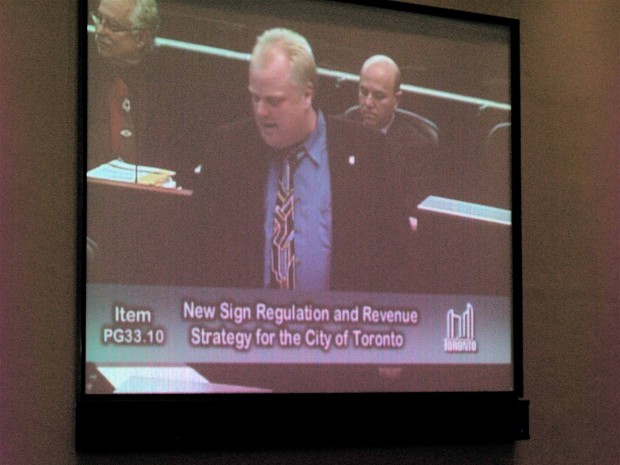 Councillor Rob Ford was comfortable hurling insults at artists during the debate.

Cheekiest moment of the debate went to Councillor Adam Vaughan for his motion that the City of Toronto congratulate Knaan for being chosen to perform in front of hundreds of millions with his 2010 World Cup song and for generally becoming a major world superstar who is still engaged with his community. Counsellor Vaughan was also quick to point out that Knaan had been the recipient of municipal arts funding when he was an emerging artist in Etobicoke – the region Rob Ford represents.

Net result: This is a great opportunity for artists to take the high road and and strengthen relationships with their allies. Clearly this bylaw would never have passed with out artists and arts-based activism. Clearly the arts should see some of this money – but what about the rest of it? After $1.4 Million of the tax is used to pay for proper enforcement of the new sign bylaws, what will the other $9 million go to? Obviously the Toronto Arts Council is a good start, all of it would double what TAC gives out in a given year, which seems unrealistic in a city with a cost-prohibitive transit system.

What are the other things that make a city beautiful?  I would go with 1) less hunger 2) more affordable housing 3) cleaner air/better cycling routes. Someone else might pick something else, but I bet most artists would be in the same ballpark. Arts activists are now in a unique position to increase their own funding and that of their allies and partners in making a truly beautiful city.

This is possibly the only way to prove ideologues like Ford and Minnan-Wong wrong: By showing we understand we are part of a grander scheme for society, one that incorporates many factors that work in tandem with one another that make our communities a better place to live. We are even capable of sharing resources amongst ourselves – because it is essential to each element that we all thrive. Real people and communities are complicated and multi-dimensional that way.