Welcome to Praxis Theatre’s “Open Source Theatre Project”, that will lead you through our development process for Section 98 from January, through to our workshop presentation at HATCH in March, and onto the next phase of development after that.  True to the spirit of all things “Open Source”, we want to show you our material as it is created, and we want to hear back from you.  What are we missing?  What haven’t we thought of?  Is there a youtube video or a CBC  archive that you think would be really helpful?  Here, you will find the “source code” of Section 98.

I have been charged with the responsibility of preparing and maintaining these posts, and I’m hoping that you’ll use this site to engage and interact with us in our exploration of some very complicated and layered issues.  I started working with Praxis in 2009 during the development of the first iteration of this project for the Toronto Fringe Festival, called Tim Buck 2 and it has been incredible working with a group of peers to create theatrical materials out of court transcripts, newspaper articles, history textbooks, and thin air.  I want to share that process with you.

To aid in this creation process, our dramaturg Alex Fallis has been leading us through a process that began with a mapping exercise.  For each major topic we began to plot out the related subtopics that would require further research, and that were of particular interest to us.  Laying out the individual eras visually made it immediately apparent, what we didn’t know.

Starting with the era of the Progressive Arts Club in the 1930s, we established the various issues that we felt were important to consider: 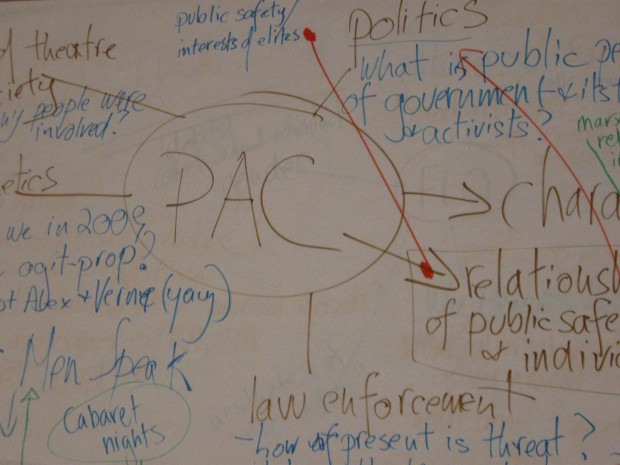 Then item by item we asked ourselves, “what don’t we know?”

The topic of aesthetics brought up the question, “why, in 2009, do we hate Agitprop?”.  Politics raised questions of the public perception of government tactics of the time, and so on.

From there we moved on to our 2nd era, the FLQ in the 1970s.  We were interested in looking at: 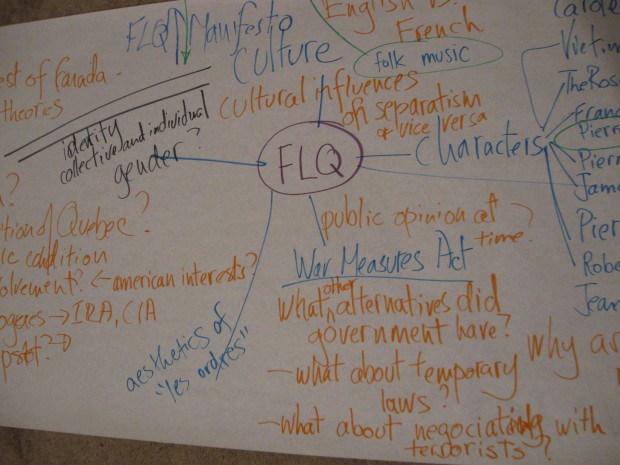 The general consensus amongst our anglo and bilingual creative team was that we were widely ignorant of anything more that the bare facts and events surrounding this era..  Luckily Alex has been encouraging us to warmly embrace the concept of “how ignorant are we?” when tackling these big topics.  So here are some of the things we decided we need to know more about: 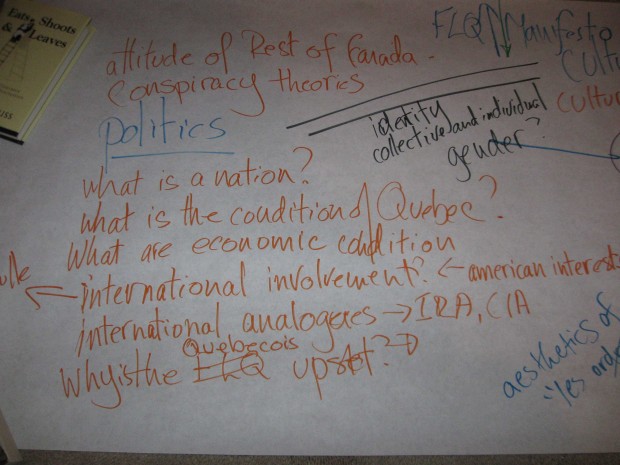 From there, we set the two maps side by side to look for the issues and/or questions that connected them… similar questions/character types/the role of the Prime Minister, etc.  Then it was a matter of picking out the elements that interested us to research and present at the next research session in a presentation that was interactive and/or performative in some way.

As a bit of group research, we also got together recently for a movie night.  Pizza, beer, brownies, and a copy of Les Ordres, a 1974 Cinema Verite piece that won Michel Brault a Best Director prize at Cannes, and tells the story of the incarcerated civilians while the War Measures Act was in place during the October Crisis.

Near the end of the film as prisoners are being released, one of them shouts out “next time there’ll be a trial in the streets!”.  So I’ve been thinking, given this situation, and people like Omar Khadr sitting in Guantanamo Bay for 7 years from the age of 15, at what point do systems or Governments create the very movements they are trying to suppress?

« What you missed in the theatrosphere over the holidays
Justin Sage-Passant vs Chris Gibbs: An epic battle of self-deprecating humour »