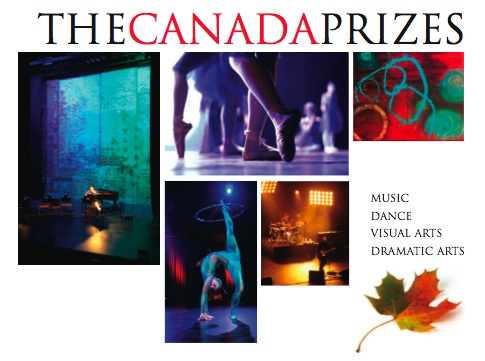 Last winter the Canadian cultural community was shocked to learn the only new cultural funding of the big “2009 stimulus budget” would be an international $25 million Nobel Prize of The Arts/ competitive arts festival with qualifying rounds where the grand winner in each category would perform at Luminato. Soon after, it was revealed that falsified documentation about who’d been consulted was used to pitch the prize to the government. (Exactly how did that process work?) At the same time voices in Quebec were becoming increasingly uncomfortable about the Toronto-centric Anglo bias to the project, and many other voices nationally in the cultural sector began speaking out against cutting domestic funding in tandem with creating a large international award. Soon after, the initiative was classified as “under review” and no one ever heard about it again.

Well guess what? It’s back.

Minister James Moore announced yesterday that The Canada Prizes will happen, are no longer connected to Luminato, and will be administered by The Canada Council. There is a five-member Advisory Panel that will do some super-fast, but extensive consultations with “key figures in the arts and culture sector” before advising the Minister on the best way to set the thing up by the end of the summer. For anyone unlucky enough to be considered “not-key”, you can contribute your thoughts through an online form available for just 17 days at this link on the Canadian Heritage Website.

It’s hard to have a single opinion about all this: In some ways putting this cash in the hands of The Canada Council is the best, smartest, depoliticized way to distribute arts funding. So fundamentally I’m not sure that the specifics of the award will be all that controversial as long as it is distributed by an arms-length jury. The crazy part about this whole process, and the media coverage of it so far, is the lack of attention to whether the prize is a good idea to begin with.

The stated goal in the Ministry’s press release is to “brand Canada as a centre of excellence”. Which is a good idea – except for one thing – after we’re branded as excellent, we will have to create things that are excellent. Things aren’t looking so hot on that end – between the policies of current Federal and Provincial governments and the economic crisis – actual monies for art going to artists is way down.  Farewell DFAIT, Trade Routes, PromArt, small magazines, endowments, and BC artists. Bonjour a huge amount of money to an artist at the top of his or her career and the administrative and production costs of a massive international ceremony.

So more than anything this just seems like putting the cart before the horse. We would like to be branded as excellent, we would like to be perceived as excellent, but we are going to reduce the funds that would lead to excellence. (We will however throw you a big party if you ever get there.) It is a common approach to Canadian cultural funding these days that is a lot like encrusting the tip of a melting iceberg with gold. It should also probably be noted that it creates an inverse relationship between the creation of art and “fancy galas“.

Since the majority-that-almost-was in 2008, the Conservative government has been looking for ways to appear pro-culture while not actually funding any of the art or artists that contributed to their unrealized ambitions. This prize fits firmly in this category of things that will allow the government to say that arts funding is “up” while continuing to decrease the amount that is actually allocated to culture, either directly through grants to artists or indirectly by subsidizing rehearsal, performance space, equipment, travel costs, etc. 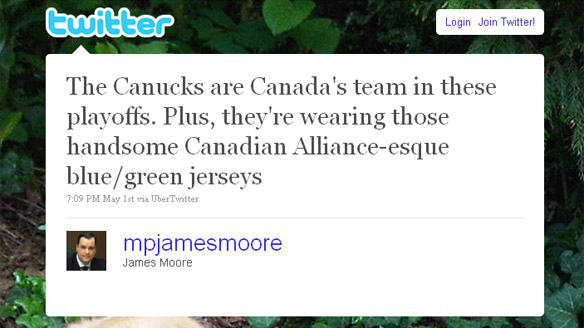 Ironically, when the Minister of Official Languages and Canadian Heritage re-announced the prize yesterday, he received extensive coverage in the media – for something seemingly unrelated: In a hockey-induced fit of pride over the weekend he’d twittered the Vancouver Canucks were “Canada’s team in the playoffs”, seemingly unaware that many Canadians consider Quebec a part of Canada. (And all of a sudden we got a glimpse of how they could just forget to put French in the opening ceremonies of a Canadian Olympic games.) In an article in today’s The Globe and Mail he remains unrepentant and stands by his tweet and seems unabashed by the notion that Tweets Have Consequences.

So here we are right back where we started eighteen months ago, except everyone’s a little more hurt and a little more bitter: Anglophone artists are increasingly starved for support, francophone artists are armed with multiple instances of the government trying to exclude Quebec from the definition of Canadian culture, and a hostile government is inventing new and interesting ways not to fund the ecosystem that creates Canadian culture in both official languages. I am going to be so relieved to talk about this era in the past-tense.

If you want to read THE OLD Canada Prizes outline – the one that no one wants to talk about anymore – click here. It seems only fair that interested citizens wishing to provide feedback to the government have (unredacted) access to the documents used to create and approve the initiative.

Filed under arts funding cuts, Canada Prizes for the Arts and Creativity, twitter.