Director in Training: At least I’m not smoking

The first time they ever let me in a rehearsal room at The Tarragon Theatre was when I was a Script Coordinator during the 2008/09 Season for Alias Godot by Brendan Gall. Two-and-a-half years later, as Director in Training I found myself once again observing a new work by Brendan be brought to the stage during the tech and preview performances of his latest Tarragon play Wide Awake Hearts.

For me the biggest difference between the two experiences was not going to have a smoke every 1.5 hrs as Brendan and I did pretty much like it was our job regardless of weather during Alias Godot. I don’t know if he’s totally off the rockets, but where there was smoking actually, there are now lines in the play about not smoking:

When busted for abandoning his partner “D” played by Maev Beaty, Raoul Bhaneja’s character “C”, explains: “At least I’m not smoking.” “What do you want a medal?”, she replies. “I don’t know. Can you smoke medals?”, he counters.

I always liked that part, even if it made me want to start smoking a bit – or maybe just try to smoke a medal. They gave me one for finishing the half marathon this fall and it would be a beautiful irony if after using running to get off cigarettes, I then got addicted to smoking the medals they give out to runners.

Anyhow, I asked Brendan if we could chat about the processes and experiences of bringing these plays to the stage on G Chat and turn it into a blog post. He said “yes”. This is the (lightly edited) result during which I entirely forgot to ask him about or bring up the smoking thing: 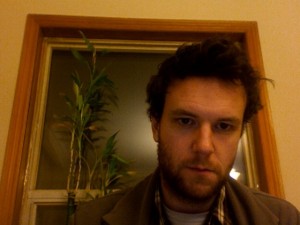 Brendan: There you go.
me: Cool so this works?
9:04 PM Brendan: Yup.
me: Great. I might pause to copy/paste.
Brendan: Got it.
me: Im also a shitty typer
Brendan: I might pause to pour tea.
Or take out my contacts. They’re really bugging me.
me: S’all good. Here we go.
9:05 PM Brendan: K.
me: Before we talk about the rehearsal room, I wonder if there was any major differences in how you approached writing the two plays?
Brendan: The plays themselves? Yeah, definitely.
9:06 PM Alias Godot was pretty freewheeling in terms of structure compared to Wide Awake Hearts.
9:07 PM In AG, other than obeying the basic structure of entrances and exits – ie. Vladimir & Estragon are visited by Pozzo & Lucky once in the middle of the first act and once in the middle of the 2nd act, I pretty much just wrote intuitively.
9:08 PM In WAH, I decided that I wanted to see if I could write using structure as a much stricter principle.
9:09 PM So I wrote out all the possible character/scene combinations for a 4-hander: 4 monologues, 6 dialogues, 4 trialogues & 1 scene with all 4 of them.
Then I tried to figure out some sort of balanced arrangement of these scenes.
9:10 PM I ended up using a sort of palindrome with the 4-hander scene in the middle and the second half mirroring the first. Also, I made a rule that there always had to be one carry-over character from the previous scene, so that someone was always getting ripped away from what they were doing and thrown into the next thing. I figured out that structure before I wrote a word and then stuck to that without fail, even when it was super-annoying.
9:11 PM Also, I misspelled palindrome.
You’re gonna spellcheck this right?
Don’t make me look dumb, Wheeler, or I will burn you to the ground.
9:12 PM Getting tea. Keep typing. 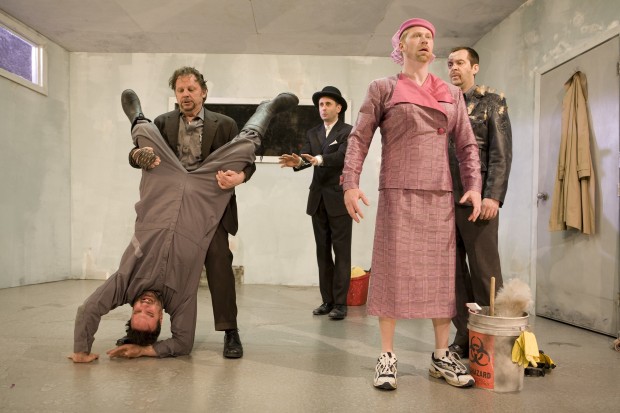 me: So when Gord Rand’s character A in Wide Awake Hearts says” he doesn’t write from theme” that was semi-autobiographical in terms of how you approached the play?
9:13 PM
Brendan: Yeah, although we cut that line during previews.
One of the murdered darlings I miss most.
I think it’s still in the published version.
9:15 PM me: I liked that line, but I also thought the play was way better on opening than in previews, so all those little cuts added up to something good. How did you find the process of whittling away in previews differed between Alias and WAH?
9:17 PM Brendan: Well, again, because Alias was so much more “open,” I think it was a lot easier to cut and add willy-nilly (if I can say “willy-nilly”), and I think I initially got quite excited by that, the romantic notion of making changes very quickly, on the fly as it were, and then ultimately found that quite overwhelming.
9:18 PM I think it’s easy with a new work and the writer in the room to default to solving problems with re-writes, and very quickly, but I’m not always sure it’s the best thing to do.
9:19 PM Of course often it’s going to be the script, but sometimes I think even if it IS a problem, it’s maybe a good problem for actors or a director to have.
I think if you get rid of all the problems you can end up with a very smoothly functioning boring play.
I don’t think Alias Godot was boring, but I also am not sure how well it functioned.
I think I just made too many changes ultimately, and lost the plot a little – figuratively and literally.
9:20 PM This time around I was adamant that I not deviate from my design structure, so there were certain things I just wouldn’t do.
9:21 PM If this was the place where A did his monologue, I knew that would always be true. The monologue could change in content and execution, but it always had to exist and its placement could not change. I think those obstructions helped me a great deal.
9:24 PM me: I remember as Script Coordinator that I was very, very busy during previews of Alias giving out copies of Page 46E and the like, things definitely seemed more measured during WAH tech. Do you think you will continue to anchor yourself with structure on the next play you write? What about palindromes? I am partial to palindromes myself. Just a one-off or are their more palindromes in the future?
9:25 PM Brendan: Oh, well, I could never say goodbye to palindromes forever, I would never paint myself into a corner like that. But surely there are other hidden nerdy structures I could adhere to…
I dunno – I’ve always been quite intuitive with writing, but lately I’m starting to think that’s maybe not the best way to be.
9:26 PM I think I will always have to procrastinate before I write, but maybe I will start procrastinating with some prep-work, like figuring out what the hell the thing’s gonna be about.
I should say though, even though I had this structure in WAH, I still didn’t necessarily know what would be accomplished in each scene. I wasn’t that advanced.
I was still writing my way through a series of dark rooms.
I just knew the layout of the building. 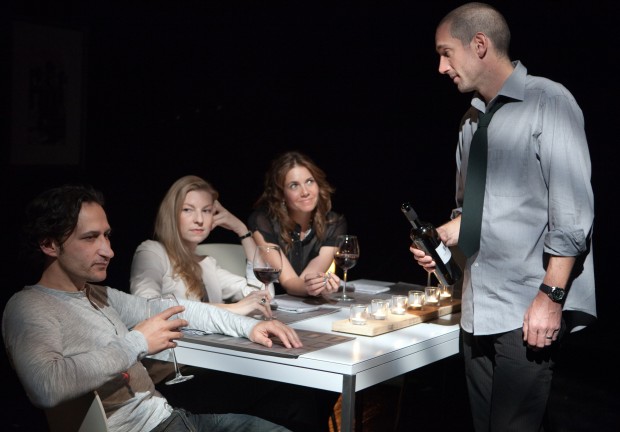 9:29 PM me: You got your start in The Fringe with A Quiet Place. Now that you’re getting produced by other theatres, what one thing do you wish you knew before you started having your writing produced and developed by other people?
Brendan: Oh man…
9:30 PM me: I had to deliver one non-softball.
Brendan: No, no, keep ’em coming.
I just can’t think of an answer.
9:32 PM me: How about this. What does an aspiring playwright need to do to keep his or her voice intact and get produced by imaginative professionals?
Brendan: I think I wish I had known that sometimes the way to be the best collaborator is to occasionally be absolutely stubborn and unbending about something. Not always, but every once in a while, I think this is very useful.
Right, well there you go.
Don’t show your work to people until you are ready to have it torn apart.
…
Make sure you know what’s important to you and what you’re not sure of.
9:33 PM Let people help you with the latter and don’t let anyone fuck with the former.
I’m still learning how to do that.
Surround yourself with collaborators you trust and trust them.
That sounds contradictory, but I don’t think it is.
You’re a collaborator too.
9:34 PM And sometimes you have to trust yourself.
And I think good casting is 75% of the work.
me: That’s a pretty good list. I have to take a sec to copy/paste so I don’t lose this.
9:35 PM Brendan: I’m not sure of that percentage.
It might be higher.
Possibly as high as 95%.
But really, good actors will carry you to the promised land.
9:36 PM And bad actors will kill you dead.
I’ve been very lucky with that.
me: Yes. As Director in Training this fact has been drummed into me consistently by all parties.
9:37 PM Brendan: Well. It’s true.
There’s that addage: if you take a barrel of sewage and add a teaspoon of wine, you get sewage. Whereas if you take a barrel of wine and add a teaspoon of sewage… you get sewage.
9:38 PM me: Yes, you have been insanely lucky with that. Even A Quiet Place your “Fringe Show” starred Christopher Stanton and James Cade. Excellent addage.
9:39 PM Brendan: Yeah. I’ve also been very lucky to have directors who trusted me, casting-wise. From Pounsett to Richard Rose to Gina, they all trusted me. I don’t think Pounsett even knew who James Cade was at the time. He might not even have known Stanton, I forget.
9:40 PM Likewise, I don’t think Gina really knew Maev’s work, but those two got on like a house on fire.
9:41 PM I just noticed that Google Chat has an “off the record” feature.
Amazing.
9:42 PM me: That’s great to know: Everyone met for the first time somewhere. I think it’s unlikely many directors will be unaware of Maev’s work much longer. Okay this seems good. Do you want to take a pic of yourself with your computer I can use with this? Thanks for being the guinea pig.
9:43 PM Brendan: Absolutely.
Oh, also, this: