Where are we in terms of sexuality blind casting? 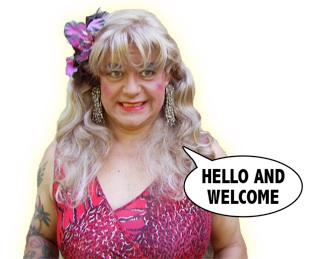 But where are we in terms of sexuality blind casting? I may be the only person interested in this topic. I was inspired to explore sexuality blind casting because of the homophobia I experienced as young actor in theatre school. My acting teachers at York were pretty insistent upon removing my feminine ‘mannerisms.’ When I left theatre school and came out of the closet many years later, I found that drag opened huge possibilities for me, really unlocking my acting talent. In contemporary movies and tv shows we do not see a lot of out gay actors. Oh yes there’s the gorgeous, straight acting Cheyenne Jackson of Glee fame. But unfortunately we can’t all be masculine and perfect looking — and some of us don’t even don’t want to be. Is there anything that could be done to challenge casting directors and theatre directors to hire gay men for straight roles?

What a stupid question. Gay men are hired all the time to play straight roles. But these are actors who don’t ‘appear’ to be gay – in other words masculine gay men. And here we come to the important question: is there  a relationship between gay actors and femininity, or lesbian actors and masculinity? Colour blind casting works because black men are essentially the same as white men — only their skin colour is different. But maybe gay men are fundamentally different from straight men. Are all gay men feminine? No, but some are. And some straight men are effeminate also. The difference is that gay men often embrace their femininity and are comfortable with it; it’s part of their culture. They may let their guard down and act effeminately outside the audition, and even let a little bit of it seep into the audition by accident.

If an effeminate gay actor auditions to read for a straight masculine part, will he get it? Probably not. 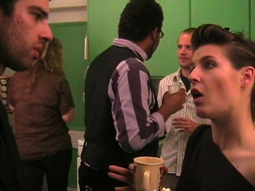 Daniel Sadavoy and Jen Neales in Episode 1: 'Something Popcorn This Way Comes'.

These are the kind of questions that The Nervous Breakdown Kitchen Party  Reality TV show sets out to answer. The Kitchen Party is yearly youth project of my theatre company The Cabaret Company. It takes place in an actual kitchen. (For the past two years it has taken place in Moynan King’s kitchen in her studio apartment in Parkdale.) Approximately ten young queer actors (out and proud gay, lesbian, bisexual and transgendered people) are invited to perform, and are paid a small honorarium. Quite often they are graduates of Buddies Queer Youth Programme. The rehearsal and performance process takes about a week and the performance is filmed for the Kitchen Party website.

The principle behind the event is pretty simple. It’s a kitchen party and somebody is going to have a nervous breakdown. The young actors work in couples and improvise scenes based on difficult, conflicted queer relationships directed by myself and my assistant Andrew Cheng. During the party, the couples pair off, break away from the party and argue and then return — so we get to see each conflicted couple separately. Near the end I stand up and ask they audience to vote on which of the partygoers will be angry enough to have a fit. The audience votes. Then we finish and the audience finds out who ‘blows.’ When a small invited audience of artistic directors, directors, and casting directors attends this one-time performance, they are sitting in Moynan’s living room watching a party in the kitchen. The performance, which usually lasts about 45 minutes, and is followed by an informal chat over wine and cheese in which the young actors are able to meet their potential employers and talk about the issues raised by the play.

And what are the issues? These young actors are improvising their own scenes, and encouraged to bring details that come from their own lives and the lives of their friends: real queer detail. For instance, the conflicts are often about class, sometimes about race, sometimes about different notions of being ‘out of the closet,’ and sometimes about promiscuity or drugs. The actors are not playing themselves, but they bring their own mannerisms to their roles in the David Mamet school of performance. The David Mamet School (as I like to call it) is explained in his book True and False. Mamet’s theory holds that actors don’t need to ‘act’ in the sense of taking on a character mask. Instead they need only perform the lines taking care to follow the character’s intentions. But would this work for a gay effeminate actor playing a straight masculine role? Probably not. Mamet’s approach is, I would posit, heterosexist (as heterosexist as Mamet himself is) and assumes that men are masculine and women are feminine, and no one has anything to hide.

Well these young actors don’t have to hide anything at The Kitchen Party. And the directors and casting agents who attend are encouraged to open spaces for them in their casts and acting companies. This is a big issue –and like Rome — the solution won’t be built in a day. In fact it may never be solved until we change our current definitions of what it means to be a man or a woman.

When I went for my Ph.D. exam one of my examiners asked me: “What is a ‘man’?” It was a very good question. I said that there is a biological man, and this can be confirmed by checking for x and y chromosomes (I can never remember how many is proper) and of course by checking for the presence of a scrotum and penis. But that will only tell you whether or not it is a biological man. The rest of the notion of ‘dude’  is concocted from cultural stereotypes, many of which are present simply in that word ‘dude’. I like to think of myself as more of a ‘dudette’ (with a penis). Am I still a man? Are there parts I can play, that match my ‘parts.’ ?

It’s a question we are just beginning to think about at The Kitchen Party Nervous Breakdown Reality TV Show.