Three reasons not to stay home 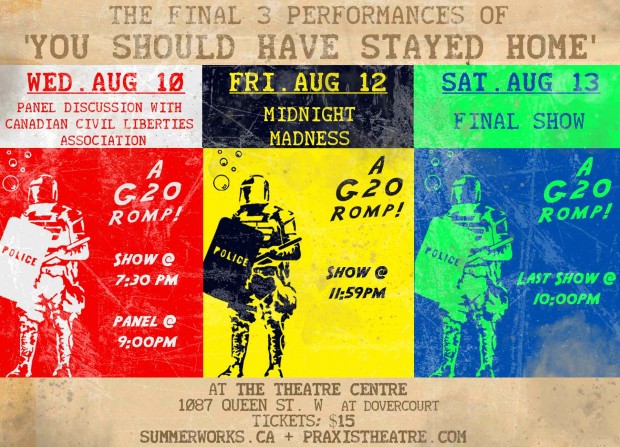 1 – Three shows left, each with something unique to offer

Post-show panel presented in the Conversation Room at the Great Hall by The Canadian Civil Liberties Association.

Midnight Show: 40 people in the cage 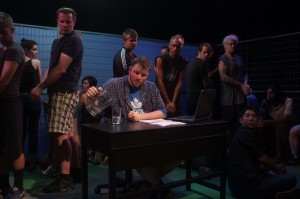 About a month ago we made the decision to put forty people in the cage with Tommy for a portion of the show. Our approach to the piece changed in a lot of ways after that, including putting a desk in the middle of the stage, so we ended up needing about 27 performers to make room for our new approach.

Beyond the practicalities of bodies in space, we felt it was the right decision artistically as what we were creating wasn’t living anywhere close to realism.

Why 40? Because that is the number of people who were in Tommy’s cage, which is the exact same dimensions of our set at The Eastern Avenue Detention Centre.

So we have decided to pursue this approach for one show only – The Midnight Show! Joining our volunteer detainees will be members of the production team, friends of the show and some members of the theatre community. For one night only, lets look at what 40 Canadian citizens stuffed into a metal cage with no access to water looks like.

This is probably our best show time and the last show of the run. It’s gonna be packed. Buy in advance, or show up early to get in. They hold 1/2 of the tickets to be available at the door 1hr before the performance. 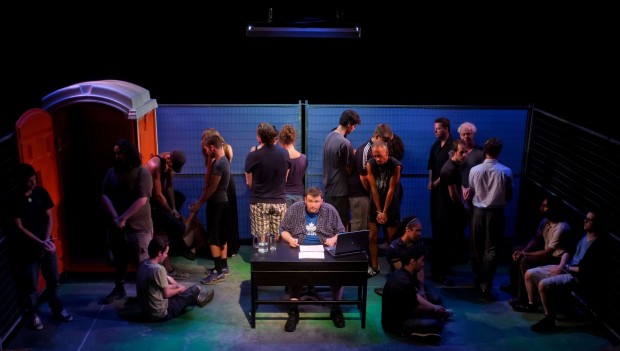 So far we have received two reviews for the show and they are, well, contradictory. Meyerhold would be proud!

NOW Magazine‘s Jordan Bimm reviewed the show, giving it NNN, but was disappointed with the show’s choice to have Tommy tell his story instead of live it in terms of performance style.

“The adaptation could go further – with more parts acted than recounted – but as it stands this is a sad but important piece of Canadian history.”

Meanwhile  S. Bear Bergman reviewed the show for  Mooney on Theatre (which does not rate shows out of 4 or 5) and was enthusiastic about the choice, comparing the performance style to Spalding Gray:

So there you have it, the only way to weigh in on this is to come check it out.

Back in the winter, Tommy was interviewed as one of four subjects that were focused on in a CBC Fifth Estate documentary about G20, during which Tommy told CBC about his plan to make a play about his experience. Low and behold – when the show airs, it shared the same name as the play Tommy was planning on creating (plus the word AT).

We’re not complaining – this was a great publicity boost for the show and the documentary was very well received. So much so that it was just nominated for a Gemini award for best writing in a documentary. Congrats to journalist Gillian Findlay on her nomination for bringing some of the consequences of G20 Toronto to viewers across the country.

You can watch the full Gemini-nominated doc on the CBC website here.

Filed under #G20Romp, Canadian Civil Liberties Association, You Should Have Stayed Home.

« You Should Have Stayed Home goes Twitter friendly
Your process is showing: Brothers »