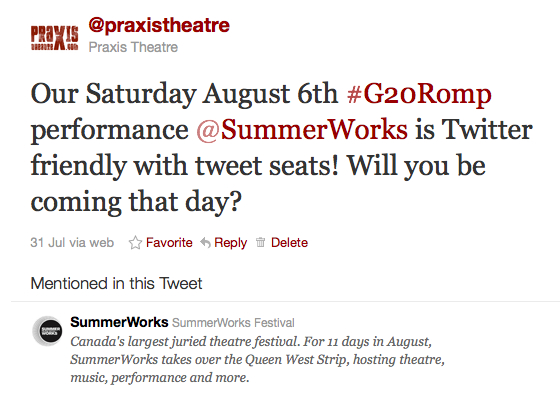 Earlier this year I had a conversation on twitter about social media, the arts, and audience development. One of the topics that came up was tweeting during actual performances. Many suggested that twitter didn’t belong in the theatre during a show, thinking it would pull the tweeters out of the performance and distract others in the audience.

When I asked a first-time theatre-goer who had been brought to the theatre via Twitter what she thought, she said tweeting would have made her feel more engaged and that she really wanted to know what other audience members were thinking throughout the show.

While some tweeters said Canadian theatre-makers were woefully behind the times when it comes to integrating social media in their work, some were adamant that tweeting during a show was a bad idea. Having already experimented with a show that incorporated live-texting throughout, I was adamant that it ought to at least be tried.

So here we are with our twitter-friendly performance of You Should Have Stayed Home at SummerWorks. We’re offering dedicated tweet seats, at the back of the audience so as not to be distracting for others, where tweeters can tweet away using our hashtag #G20Romp. All we ask is that you turn off any feature that makes a sound or vibrates, and darken your screens as much as possible – in a dark theatre you don’t really need much light.

Not sure what you’d tweet about? Our hashtag has already been in effect for some time, so here’s some of the conversation we’ve already been having. 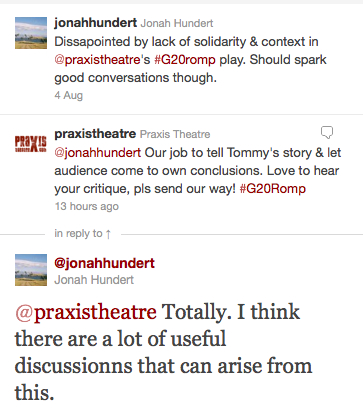 Jonathan Goldsbie had a few thoughts after opening night as well: 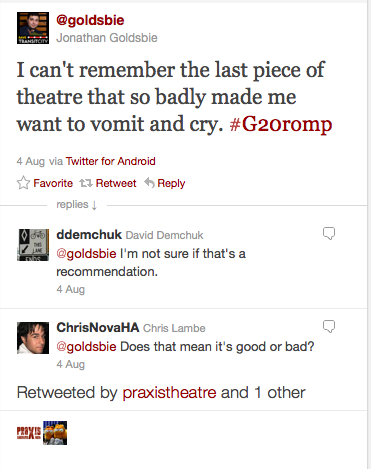 We were pleased to have Davenport MP Andrew Cash join us for opening night and the SummerWorks opening night party after the show: 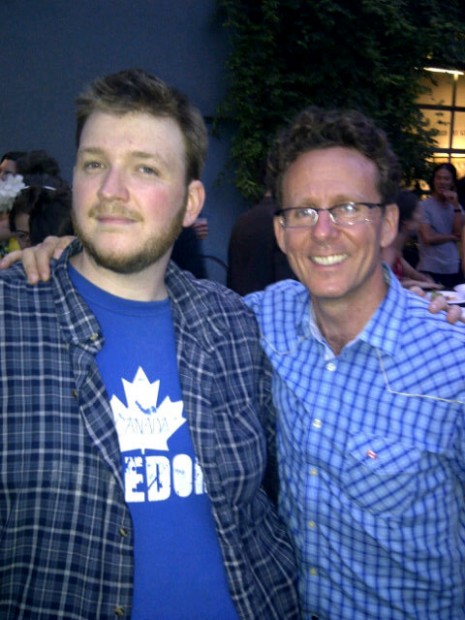 You Should Have Stayed Home performer/playwright Tommy Taylor with The Honorable Andrew Cash, Member of Parliament for Davenport

2:30pm at The Theatre Centre

Look for the marked tweet seats in the back rows, where you’ll also find the previously mentioned requests about turning off sounds, vibrations, and lowering lights.

Buy your tickets here or at the venue.

After the performance, we’ll be wanting to chat some more, both about the show and how you felt about tweeting during the show. Let us know if you met anyone new in the audience because of twitter!

Not a tweeter? Don’t feel left out.

We’re always happy to continue post-show discussions here in the comments of the blog. We welcome and look forward to your feedback.