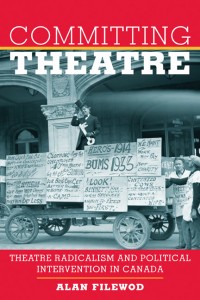 Alan Filewod’s Committing Theatre begins with a single event from June 1919. Unable to get a response from his government about how the upkeep of city properties are impacting his private garden, a man goes to City Hall and presents the Mayor of Vancouver’s secretary with a bouquet of flowers picked from properties that adjoin his. The bouquet is covered with caterpillars.

This is an important refrain throughout the book. Filewod starts before the 1920s radio sermons of Social Credit founder and eventual Alberta Premier William Aberhart, and takes us all the way to the current Toronto-based practices of Mammalian Diving Reflex’s Darren O’Donnell. Throughout, Filewod keeps returning to the caterpillar episode he considers an example of what Bertolt Brecht would later call gest, “a theatricalised action that embodies, enacts and watches a social critique.”

Reading much this expansive history of Canadian political theatre sitting in and around Occupy Wall Street in Zuccotti Park in NYC, I couldn’t help but speculate that these occupations of public spaces have something in common with the man who walked into Vancouver City Hall a century ago. Both are frustrated with a perceived injustice their government will not listen to, and both are determined to express this frustration through a non-violent gesture that exists physically in the real world. Both the Occupy protests and the man with a bouquet of caterpillars commit a consciously theatrical act.

Click below to read the rest of the review on Rabble.ca

« Mark Rothko: brought to you by webcam
Jim and Dee in Jesus Chrysler »