The movement to work outside strictly partisan lines to take Parliament back from a Harper Conservative Party supported by a minority of Canadians has been bolstered recently by some incredibly persuasive data. 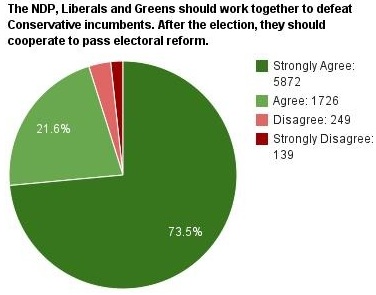 95% of the 8000 people who responded to Leadnow support cross-party cooperation to form a progressive government that represents the majority of Canadians.

Last Friday, Leadnow, an “independent advocacy organization that brings generations of Canadians together to achieve progress through democracy” sent an email to their over 80,000 supporters titled, “Maybe the most important question we’ll ever ask you“. The email asked for a response to the strategy of PRE-election cooperation to defeat Harper, followed by electoral reform.

This sort of decisive message will necessarily impact the NDP leadership race, with some pundits already referring to it as a game changer.

Thus far, Nathan Cullen has been the only candidate to support this idea and is routinely under fire for promoting what is considered heresy by hardcore New Democrats, many of whom have spent careers battling the Liberal Party.

Yet, it’s hard to imagine an organization more representative of who the opposition parties will need to join them moving forward than Leadnow. These results indicate that what was once a disadvantage for Cullen – promoting cooperation to a heavily partisan audience – may put him on the key side of a decisive issue.

Political observers of all stripes agree electoral success for opposition parties will come from engaging and expanding youth-led groups that have been present in grassroots movements like Occupy, but have been seriously under-represented in recent elections. The Leadnow response makes it clear that a ‘Single Party or Bust’ strategy will appeal to only 5% of this key cohort, or 1 out of 20 potential recruits to the cause.

The almost unanimous response from Leadnow members indicates candidates who promote cooperation with other parties as best presenting ideas and solutions that have the potential to expand party membership and excite voters.

Nathan Cullen talks to poet Shane Koyczan on the lack of youth engagement in Canadian politics and its relationship to political parties.

None of this will come as a surprise to EKOS pollster Frank Graves who recently released ‘Beyond The Horse Race’ a 7-part series on iPolitics investigating trends and issues that are informing the Canadian electorate. Amongst the conclusions reached in Part 5 ‘How Do We Cure Democratic Malaise?’:

Considered in tandem, the Leadnow response and the EKOS data combine to make a powerful statement:

The younger generation of Canadians, even those who are politically engaged, are opting out of participating in the current form of democracy. The #1 factor that is informing this lack of engagement is the rigid party system that currently exists in Canada. While New Democrats voting in a leadership race should take this information to heart immediately, so should the other opposition parties – the echo chamber of partisan politics is severely limiting growth for all of them.

Moving beyond their own self-interest to that of the country may ironically be their best chance for electoral success. Increasingly, progressive Canadians seem to be demanding cooperation from their political opposition that will allow them to vote FOR and not AGAINST something, through  a serious and credible movement to form a government that represents the majority of Canadians.

You might remember Koyczan from such hits as The Opening Ceremonies of the Vancouver Olympic Games.