Letter from a Canadian in Palestine 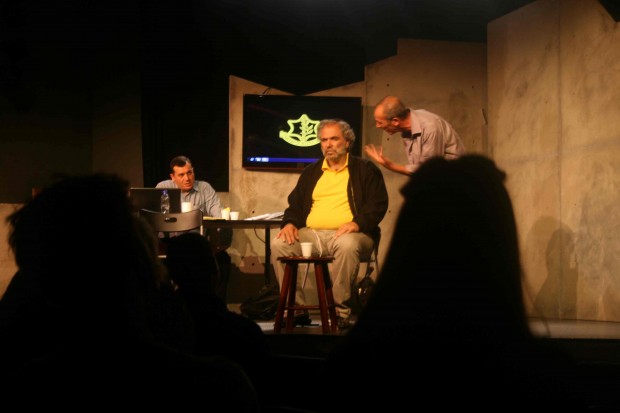 Dan Daley sends Praxis a letter from Palestine where he was touring with Arthur Milner’s Facts:

Palestine: how much do you know about it? In the little town of Bethlehem on the closing night of the month-long Arabic language tour of Arthur Milner’s Facts, I feel that I know even less about Palestine. What I do know is that I met numerous Palestinians with big hearts and a great passion for the arts. Yet still I come away from it unsure of what to do – to forget or to take action? 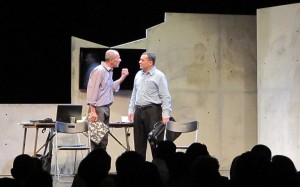 Our Canadian team included myself, Arthur, Samer Al-Saber (director) Martin Conboy (set & lighting designer) and a brief visit from Jennifer Brewin (artistic director of Theatre Columbus). We were given an entire apartment to live in at the home of Dr. Abdelfattah (co-producer and actor) and his wife Naheel Abusrour along with their five children. We could even get a lift from the Doctor’s employee, Salim, whenever we needed to go somewhere.

Dr. Abdelfattah or “Abed” as most call him, runs a cultural centre in the Aida Refugee Camp in Bethlehem (a small village of homes that stand butted up against the separation wall) This camp has existed since the Israeli instated partition of 1948. If you’re not aware, this was one of the first extensive occupations that led to thousands of Palestinians refugees in the region. Abed was born in Aida camp during the 1960s. He is the only one in his family of seven children to study abroad and achieve a doctorate (a PhD in biological engineering). One evening he said to me: “I quit my career because I saw that I could make a greater difference through art and theatre and now it has become my career”.  So he formed the Alrowwad Cultural & Theatre Society with its own educational facility in the heart of the camp. I spent much of my time volunteering at the centre as we prepared for the tour. On a daily basis I saw numerous children from the camp receiving an education in music, dance, media arts and theatre.

Alrowwad became the co-producer of the tour with the New Theatre of Ottawa. It’s impossible to describe how the limited resources of Alrowwad continually contributed to the success of the production. Most of their equipment including video cameras, computers and stage gear is donated. Most of the young men and women who work there are donating their time. In my two months here I can say I have become very close with several of them and that’s just the kind of people they are. 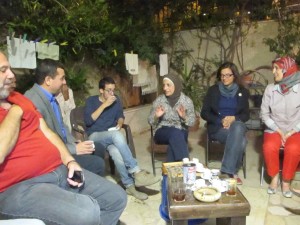 Cast at the home of Kamel Elbasha

Kamel Elbasha, the translator of the play, is the single reason the show managed to find a co-producer that could commit to the time the project needed. He essentially championed the project from the beginning and even took on the role of the character Yossi.

The tour wasn’t all fun all the time. There were times that it seemed like no one could care about what we were doing. The team and me were always un-sure if anything was actually going to get done and if anyone was actually going to come and see the show. Given our Canadian sensitivities, we had to get used to their way of working and sure enough we were delightfully surprised by their ability to coordinate huge tasks at what seemed frighteningly last minute. Much gets lost in translation I think.

On tour we drove across much of the Palestinian territory and into Israel, back and forth across numerous military controlled checkpoints. One such checkpoint confiscated our rental car and put it through an inspection that involved pulling body parts off the frame. It was almost amusing watching a young Israeli soldier carry our spare tire out from the inspection garage to be x-rayed. The best was watching another soldier come across a stack of our tour postcards. She had a moment with it, of course noticing the Arabic text, showed it to her companion and moved on. This was possibly our worst encounter. In most cases, we would flash our Canadian passports and they would barely blink. However, if you got into a discussion with them, their party line was often: “What are you doing here?” Our reply: “Visiting Palestine!” Their reply: “Don’t you mean Israel?”…

At the performances we would usually have a “talk-back” session with our audiences in a mix of Arabic and English. Rarely did these discussions leave the realm of politeness, but on occasion some presented a critical reaction. One such audience member criticized Palestinians for maintaining a level of complacency that is undermining their freedom. Another attributed this complacency to the extensive amount of foreign aid in the region, which has improved the lives of many, but like a bad drug, it only numbs the pain while Palestinians continue to bleed more land to Settlers – that’s my own paraphrase, but I think it’s a good summary of what she said. 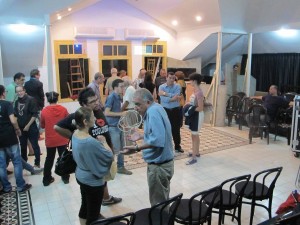 I appreciated one young woman in the crowd who exclaimed that she wanted more from our play, that it could go further, but she couldn’t articulate what exactly “further” meant. Others felt it was a refreshing experience to see a play “which did not depict Palestinians in a depressing light”. Many were excited to have a pair of Israeli characters on stage. At Jenin’s Freedom Theatre, the excitement was palpable in a room full of young Palestinian men under the age of 21. I had been told that much of the arts are inundated with the same images emphasizing stereotypes and failing to recognize the good humour Palestinians have about their situation.

Many have asked Arthur why he wrote a play about Palestine and Israel, why he as a Canadian was even interested and how he came to tell this story. One very different question, which generated a strong discussion, came from a young girl who asked, “What did Canadians think of the play?” Before Arthur could answer, one audience member exclaimed, “must have been like preaching to the converted!” and Arthur replied, “No, it was like preaching to the ignorant”.

The production under the direction of Samer (a Palestinian-Canadian) has taken on a greater sense of humour than I think Arthur or I expected. The depiction of the Settler appeared sheepish and pathetic. He is much less threatening than our Settler was in the Canadian production. I guess there is a need to laugh at that which oppresses us. What better form of therapy? I only make note of this because our 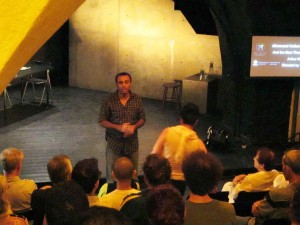 Samer pre-show with audience in Jaffa

Canadian audiences, in a concerted effort to be considerate and compassionate about everything, took the performance somewhat more seriously. The text is full of jokes geared toward a western audience, which the Canadians responded to, but our Palestinian friends used physicality to generate the humour.

A man of great distinction in Bethlehem, a professor of biology who attended our opening night, proclaimed “I would pick the Settler over the Palestinian Cop any day!” His point being that you can trust the political leanings of a Settler, especially a fanatic settler since their intent is pretty clear. To the Professor and other audience members, a cop of the Palestinian Authority needed to be a bit of a low-life. It became clear that there is much distaste for the Palestinian Authority. Alternatively, our PA cop behaved like a role model, as the ideal version of a government representative they might want.

The talk-backs, personal discussions and encounters I had here led me to think a lot about fanaticism and the purpose it has in a place like this. Fanaticism gets attention. Many settlers are considered fanatics and they’re hated by both Palestinians and any left-leaning Israeli. There are Palestinian fanatics too, but sadly I’ve heard them described as “oh yes the people living in Gaza right?” Or to take that stereotype further: “the terrorists right?” 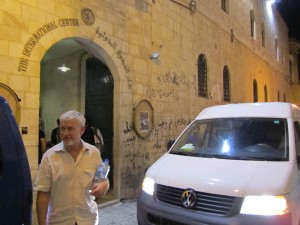 I can only base my reactions upon what I saw here. I don’t know enough to fully understand the situation. There are divisions upon divisions within both nations. Some would say there are several nations, for example: separating orthodox Jews from secular Israelis.  However many divisions, the dispute continues to subject Palestinians to a discriminatory occupation and Israelis to an instituted level of denial. No one is at ease.

Our tour of Facts was a success for the people involved. It has been invited back to perform for a complete run at several of the theatres we visited including a venue in Ramallah, Hebron and Jaffa. Our Palestinian co-producers plan to do just that and return to those venues in the new year, but this time it will be without the Canadians. Instead they want to come to us in Canada and if anyone knows a pool of money to help them come here, please be in touch.

If I cannot forget then I want to make sure others can witness.