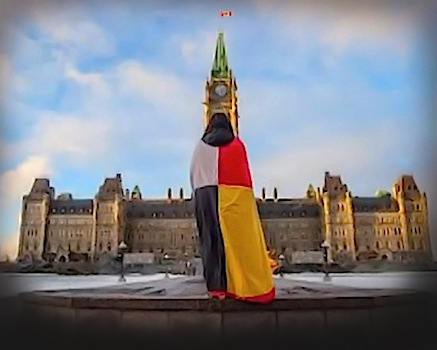 On December 10th, over 5000 people rallied across the country against controversial omnibus Bill C-45. This legislation makes sweeping changes to the Indian Act and drastically reduces protections for waterways without any consultation with First Nations, in direct opposition to existing treaties. You may not have heard about those rallies on December the 10th because our national media was busy covering a certain little well-dressed monkey lost at an Ikea store.

But the grassroots campaign known by its twitter hashtag #IdleNoMore, which grew rapidly through the use of social media, coupled with the current hunger strike by Attawapiskat Chief Theresa Spence, has forced a narrative shift. With blog posts in the Guardian, interviews on CBC (below), and various news articles and editorials, the movement has found an international audience, and international solidarity.

Chief Theresa Spence has been on her hunger strike since December 11th. She seeks a meeting with Prime Minister Stephen Harper and a representative of the Queen to discuss our country’s existing treaties. “All treaties were signed by the Crown — the government — and our ancestors … the treaties are there for a reason and either the prime minister doesn’t understand them, or he doesn’t want to respect them,” Spence has said.

Movements of solidarity have popped up across the country and in other parts of the world. In Toronto, Native Earth Performing Arts has organized a Fasting Relay in solidarity with Chief Spence. Artists in the community have each taken a day throughout Spence’s hunger strike to fast for the day in support of her efforts, and to send a unified message to the Prime Minister to meet with the First Nations leader.

What Chief Theresa Spence is doing is forcing the government and all of Canadian society to decide publicly whether they care if she – and by extension her people and our shared land – ceases to live. She is willing to die.  This is an extreme measure that I have not had the courage to take. With this fasting relay, I am proud to join with my many beautiful communities to support Chief Spence in this small yet symbolically significant way.

Below is an ever-growing list of relay participants as gathered on Native Earth’s facebook event page. Please add your name to the comments section if you have joined the fast and are not on the list, and be sure to let Native Earth know if you haven’t yet joined the relay but would like to.

Find out more about upcoming Idle No More events on their official website here.

After 24 hours, and a fair assessment landing on the reality that Harper would not be hearing her, the organizing of this support relay began.