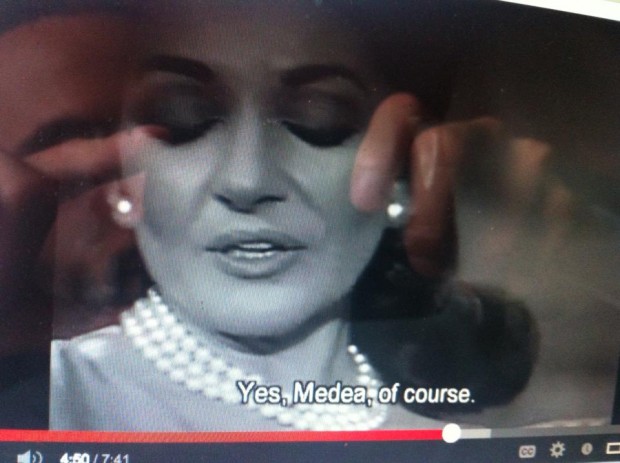 In the last two posts I’ve explored some of the personal and political issues driving The Ballad of _____ B. Here, I’d like to focus on some of the formal and methodological dimensions of the piece, particularly in relationship to the focus on social media interaction for HATCH 2014

The curatorial challenge during the call-out for HATCH last spring to consider social media as means to make performance felt like a productive way to work through the estranged biographical text that had recently come back to me. There was something about the narrative of _____ B that begged to be staged, and the added dimension of online interactivity seemed like a rich, if uncertain, way to open up the narrative.  The call for submissions also coincided with a series of late night experiments in transcription of found online conversations that included an interview between Maria Callas and Barbara Walters from 1974.

__: Frankly, I had invited her once to… ‘cause when I invite Mr. _______ to a party or a… gala like the Medea film, or an opera, when they invite him, they must invite his wife. And many friends of mine, then, had said well, we will not invite her. I said, you will, I’m sorry. Because she is his wife and you must. And we talked about that with Mr. _______ and… she did not want to come. You see, so therefore, there is no problem. But it’s not… I… I hold no grudges. I don’t think it’s necessary, and it’s so tiring. And I don’t think that in long run it helps in life. Neither does it help you to look well, or live well with yourself. Now, when I live with myself, I have to be a hundred percent… ahh… honest with myself and be happy with myself. And I have integrity, which is a very expensive… using _______’ words; it’s a very expensive price to pay for integrity and honesty. I can pay that price.

__: Thank you __ for the honesty and the integrity that you’ve shown us in this interview.

__: Thank you for asking these questions. I couldn’t be otherwise. It was a pleasure.

In terms of a structure for a stage piece, I was already thinking in triads:

_____ B’s biography is already over-determined by political classifications; it needs a perpendicular internal narrative. In attempting to figure out something about the site-specificity of the stage, Bertolt Brecht came to mind. Perhaps spacing and re-distribution have something to do with his awkwardly translated ideas of de-familiarization. The embodiment of the character itself needs to be made unfamiliar through spacing and redistribution. No one body on stage will contain _____ B. She/he/they will flow between Maryam, Manolo, and I. And if in the Climbing Mount Canada narrative _____ B can only be thought of in terms of a need for belonging to a national imaginary, then it is necessary to think of him/her/them in terms of desire. Indeed, it is necessary not to assume a shape for the character, a gender, a race.

Something in the character has to remain open and incalculable. A model for the enactment of the unpredictable appears in Margaret Dragu’s recent feminist re-activation of Cageian chance operations for her solo exhibition at the Richmond Art Gallery. Anne Carson’s dedication of her translation of Euripides’ Antigone, Antigo nick, ‘to the randomizer’ who measures things also offers an outline for an open ended character.

In a conversation with Michael, we realized that in the case of The Ballad of _____ B, that randomizing figure could be virtual participation. A section of the script for the performance containing a series of open spaces in the narrative will be made available online to the audience, likely as a Google Doc, a week prior to the beginning of rehearsals. People are encouraged to participate by filling in the blanks. The results of this collaboration will help shape the performance.

Next week, I will write about how the task of making performance art for a stage.