The Making of Not-A-Play: Performance Art and Social Media 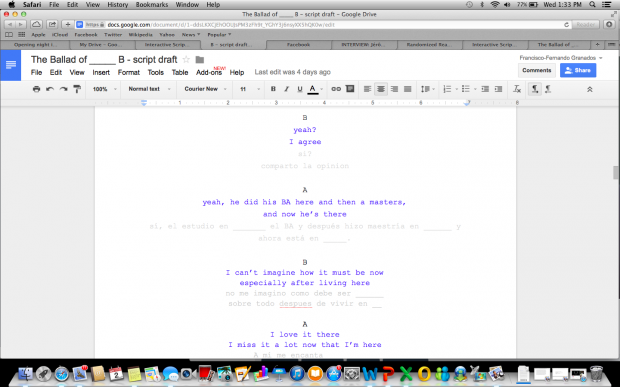 In performance art, the time and the place of the creation of the work is always the same as that of the presentation of the work. This characteristic is perhaps what separates performance from any other aesthetic medium: in painting, sculpture, photography, and film, making and showing tend to be spaced by an irreducible difference that puts the making before the showing. No matter how much an artist working on a live piece plans and pre-produces, and as important as that may be, the performance always becomes something, and then becomes something else as it unfolds. Esther Ferrer says it transforms in situ.

A big part of the thrill of working on The Ballad of ______ B for HATCH has been the challenge of creating a work specifically for the stage. One of the goals is to make a work that uses all of the material and conceptual elements of theatre (stage, script, performers, lights) with an attitude of critical respect for the medium that yields something that is decidedly not-a-play. This negativity has to do with an interest in a creating a productive tension between what I hope will be the site-specific approach of the project, and entrenched conventions of the stage as a social (or indeed anti-social) space. Incorporating an interactive element based on the online contributions of the public will be a way to bring together the previously discussed tactics of spacing and redistributing of the elements of theatre.

It is here where the curatorial premise of HATCH, with its focus on social media as a tool for the creation of new performance comes into play. In the recent history of conceptual text-based performance work, my approach owes something to the Fluxus sensibility of Alison Knowles, particularly in her computer-generated poem A House of Dust. The poem was created in 1967 as a collaboration between Knowles, the California-based composer James Tenney, and the Siemens 4004 computer. A House of Dust creates “stanzas by working through iterations of lines with changing words from a finite vocabulary list.” The capacity of computer technology at the time limited the possibilities of electronic interventions into poetic processes to closed systems reminiscent of Modernism. In The Ballad of _____ B, this approach is updated to incorporate a relational element. 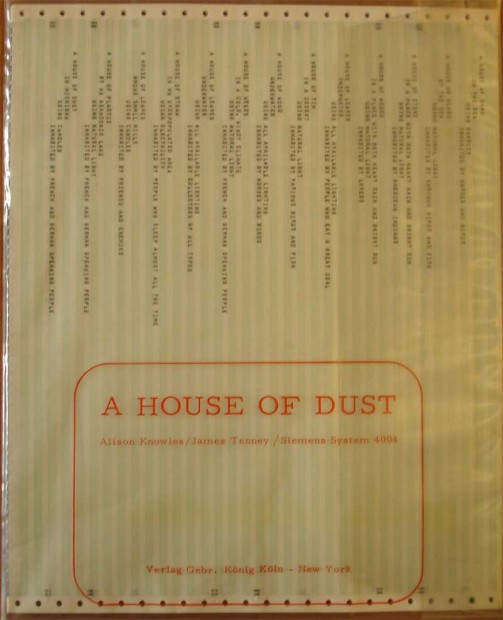 A House of Dust, Alison Knowles and James Tenney (1967)

Social networking platforms will act as randomizing agents, creating interventions in the spaces opened in the text. On April 18th, a significant section of the script will be made available online as a Google Form through a variety of sites including Facebook, Twitter, and the Praxis Theatre site. The fill-in-the blanks approach to the script recalls the aesthetic of vocabulary lessons in ESL language learning. In this case, the didactic form does not follow a function. Audience members are encouraged to fill in the blanks with responses that may range from the obvious to the non-sensical. The accumulation of these results will be used during the week of the residency to re-shape the script. 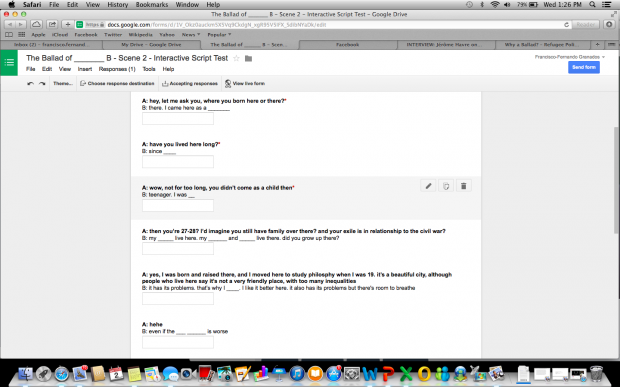 A prototype for the form is available now as a test. Click here to access section of the script and fill in the blanks.