Get your show trailer on Praxis 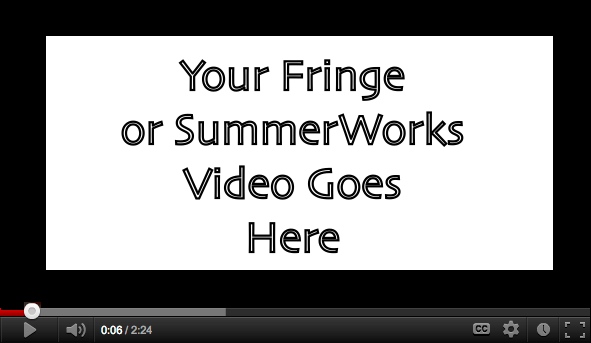 This year we are trying something new over the busy summer months when the city’s two biggest theatre festivals play host to roughly two hundred indie productions over July and August. As YouTube trailer and promo vids become the norm in indie theatre promotion, simply creating a video is not enough to attract the interest of potential audience members.

For these videos to be effective they have to be seen, and seen by people who conceivably would buy a ticket to some indie theatre. This year, we at praxistheatre.com would like to help ensure that your video will be seen by a wide number of potential audience members through exposure on our site.

1) Your own blog post with your video embedded, published over the ten days leading up to your festival.

2) A video listing with a playable thumbnail version of your video that will live in the sidebar of praxistheatre.com for the duration of your run.

1) An embedable video no more that 4 minutes long from YouTube, Vimeo or comparable site.

Email us at info@praxistheatre.com to sign up. There are a limited number of slots available.

The basic math on this is that if you think having your video on praxistheatre.com will sell 11 Fringe tickets, this is an opportunity worth taking advantage of. (11 tickets @ $10 = $110)

Jim and Dee in Jesus Chrysler

As the artistic leaders of The Worker’s Theatre movement in Canada during The Great Depression, Dorothy Livesay (Dee) and Eugenia Watts (Jim), upon whom Tara Beagan’s new play Jesus Chrysler is based, grew up as good friends and were some of Toronto’s original radical organizers. Based out of U of T’s Hart House Theatre, the two were part of a group that staged agitprop plays that traveled throughout South-Western Ontario in Jim’s car, which they called The Jesus Chrysler. 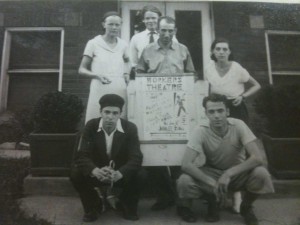 These performances were sometimes done for a handful of interested onlookers and sometimes performed for thousands: When they performed in solidarity with mostly immigrant women cannery workers on strike in St. Catharines they were run out of town by the police. When they performed during the Stratford furniture strike at The Brooks Steam Motor plant they did so for an audience of 3,500, or twice the number that would pack a sold-out Stratford Festival Theatre today.

Eventually these artists went on to stage Eight Men Speak, widely viewed by cultural historians as a key event that motivated the release of Communist leader Tim Buck and his colleagues from the Kingston Penitentiary and signalled the end of the use of the draconian law Section 98, which could be used to jail anyone the state deemed “seditious”. Later in the 1930s, they became inspired by NYC’s Group Theatre and the works of Clifford Odets. Founding a new theatre group called Theatre of Action, they presented the Canadian premiere of Waiting for Lefty and a number of anti-fascist works.

By 1937, Jim had left for Spain where a civil war raged and she hosted a radio show, wrote articles for a progressive newspaper and drove an ambulance. Dee went on to become a major poet after the war, winning two Governor General awards and eventually becoming an officer of The Order of Canada.

Jesus Chrysler explores the complex relationship between these women and focuses on an imagined episode in and around the founding of the Theatre of Action.

Despair and redemption: one man’s journey recovering from IAS

Every year IAS destroys the lives of thousands of performers. This short video is proof positive that no case is hopeless and that this syndrome is treatable if spotted early enough. Watch this video for early warning signs – do you know anyone showing signs of IAS? Identification and treatment may be their best chance for recovery.

Tell Donny I’m blogging and I’ll call him back

Thanks to Impolitical for bringing attention to this clip that explains perfectly why you won’t be hearing from me until after The Africa Trilogy opens. (Don’t worry, interim editor Aislinn Rose will keep the content flowing in the meantime.)

For more detail on this video, ASL performances at Luminato, and all sorts of other online media about the show check out  The Africa Trilogy Blog.

This young thespian really hits his rhythm around the 2 minute mark.

Okay, I’m putting the coffee down, but mostly because I feel like replacing brass balls with a half eaten pretzel is a strong choice.

Press the blue and white thingy above to see a video that expands the metaphor to include Girl Guides.

And now for something completely different….

After scouring the internet for good uses of YouTube videos to promote Canadian theatrical productions, one thing became crystal clear: Indie companies have this scene locked down! No venued or commercial companies we found really had anything worth posting in this format.

Give it time. The mainstream takes time to co-opt new forms, but they invariably get around to it. It has likely not sunk in that people who watch YouTube promo clips are the NEW audience for theatre and they are still milking the OLD one.

Here are some fine examples of the use of YouTube videos to promote indie productions:

What do you think? Is this the new cost effective way to promote a show, or just a fun hobby for artists with too much time on their hands? Do these clips make you want to see these shows, or are they just entertainment unto themselves?