Ok, let us be the first one to get all the bad jokes out there: Theatre has gone to the Dogs, Theatre gets put in the Doghouse, Dog Gone it Get me a Ticket – because Dachshund UN is coming to Harbourfront Centre next week. Frequent Praxis collaborator Margaret Evans played a key role in casting.

Looking for other theatre blogs  considering pressing local issues? Umbrella Talks is up and running again with a series of new interviews with theatre artists. Just launched this summer, In The Green Room has also made a splash with multiple writers contributing to the site and a series called Stop, Start, Continue. Of course, don’t forget to check out Theatre Ontario’s Blog, which is a consistently updated resource for theatremakers. 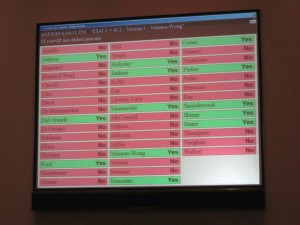 Toronto Arts and Culture got a big boost in this year’s municipal budget, with per capita investment going from $18.30 to $25 over the next four years. The funds were generated by The Billboard Tax, invented and proposed by Beautiful City, which we covered when it was going down at City Hall. Since then, the tax has been appealed all the way to The Supreme Court where the Billboard Lobby’s loss was Toronto’s gain.

In the world of federal arts funding, The Globe and Mail revealed most Canadians think the $30 Million spent promoting the War of 1812 was a waste. Conversely, they were disappointed The Harper Government didn’t spend more time celebrating actually important milestones like anniversaries of Women’s Suffrage and The Charter. No word yet on if there is a correlation between these Canadians and the ones The Toronto Star found had grown weary, “even hostile to”, Economic Action Plan advertisements.

The Montreal Theatre Awards are in the process of being invented. Anglophone theatre companies will have their own annual peer-juried awards, presented under the auspices of the Quebec Drama Federation. Right now they are picking the name of the award, which you can vote on in a Facebook poll.